Everyone learns differently. We process information at our own pace, use different devices, and interact with content in ways that suit our needs. That’s why we want to help you create immersive 360° experiences that are accessible to all learners.

Check out the list of available accessibility features for 360° images below. We’ll continue to refine them in future updates. And we’d love to hear your feedback about the accessibility experience!

Alt text helps learners understand the value of media files and buttons, and is especially important for people who use screen readers and other assistive technologies.

It’s easy to add alt text to the media and button in a marker or hotspot label in your 360° interaction. Just install the January 2022 update or later, then follow the steps below. 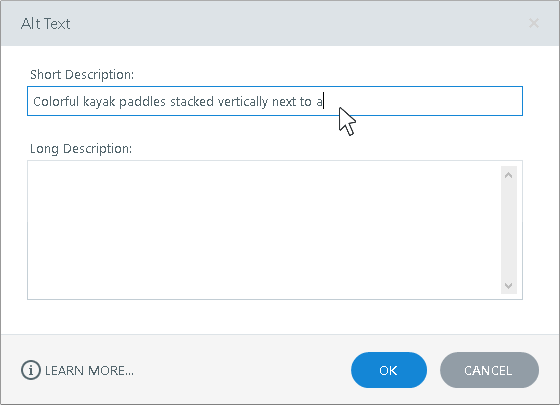 Keep these tips in mind to write effective alt text.

As of October 2021, learners can navigate 360° images with a keyboard. Accessible navigation is built right into the published output—just create your course and publish!

The following table lists the keys for navigating 360° images and the behavior of each key.

Starting with the October 2021 update, 360° images are screen reader accessible. Learners with visual disabilities can easily explore 360° interactions and know exactly where they are.

When a screen reader encounters a 360° image, it announces the following information: