We've shipped another much-requested feature for Rise. You can now easily send a copy of your course to another Rise author. It's a great feature when you need to share a source file with a client or colleague.

Here's a Peek vid on the feature:

Keep in mind that both parties will have an independent copy of the same project. Changes you make to the course won't appear in the other author's version, and vice versa. Soon we will be releasing the Collaborators feature which will allow multiple authors to work on the same course.

Thanks Adam this is a great way to ensure the client can get his hands on the source files. Also lets me share examples

Thank you, this is much appreciated!

Question: If someone sends me a course they created and then later the close their Articulate 360 account, i.e., they don't renew it, do I still retain my copy of their course?

Yes Brett. Once they send a copy, the course in your account has no relation to the original course. Yours will remain even if they delete their version or close their account.

Hi Adam. I thought that would be the case but always good to verify. Thanks for the quick reply.

I am reviewing a course right now in Rise, how do I make comments regarding the course? I don't see the same review process as 360.

Thank you for this very important clarification. It also means that any content updated in the source material does not flow through to the copy (which I assumed was the case, but it is very good to be explicitly clear on the matter).

Hmmm.... now to find a way to have some that are tethered to the core content mixed with pieces that we would let clients edit....   something to ponder (more of a process issue than a tool issue).

Perfect! I can now share with myself on different accounts!

We’re working on a feature to publish your Rise course to Articulate Review for easy feedback!  We’ll let you know as soon as that’s ready.

I'm really glad to have this feature added!

I just used it yesterday for the first time; I needed to copy four courses from an old team ID of mine to my go-forward team ID. Two courses were original files, and the other two were duplicates (created in Rise) of the originals.

The file copies received by my destination ID were similar to those created by my source ID, but there were some oddities. None of them were major for me to deal with, but they could have been significant if I was transferring the files to, say, a company that contracted me to do the work for them - the files wouldn't match what I built. See the attached PDF for screenshots.

Pages 1 and 2: The two original course files don't show their cover photos in the thumbnail view of my destination ID, but the cover photos do display properly when being previewed (or viewed as a user). The duplicates of the course files didn't have this problem.

Pages 3 and 5: The original course files were set to "Author Hidden" but the author isn't hidden for the copies received by my destination ID.

Pages 4 and 5: The original course files had custom labels applied but the copies received by my destination ID didn't retain those customizations.

I also discovered I couldn't use the Copy feature more than once for the same file to be sent to my destination ID. I accidentally deleted one of the received files in my destination ID. When I tried to Copy it again from my source ID, the normal pop-up message displayed to say the copy had been sent but my destination ID hasn't received a new email notification and a new Copy hasn't appeared in my destination ID's Rise workspace. Fortunately, I had also sent my duplicate copy of the file so I was able to work from that!

Keep up the great progress with Rise!

Thanks for sharing those examples with us here! I'd like to get a Support case started for you so that you could share a copy of one of these courses with our team and so that we could gather more information about the two Articulate IDs in question.

Keep an eye out for an email from Support@articulate.com!

along with sharing courses... any way to copy a lesson and move to an existing or new course?

You can copy lessons within a course by clicking the ellipses next to Edit Content, then select Duplicate.

You also have the option to duplicate a course as a whole. For example, if you need to use Lessons 1, 3, and 4 from Course A to start Course B, you can duplicate Course A and then remove the lessons you don’t need. 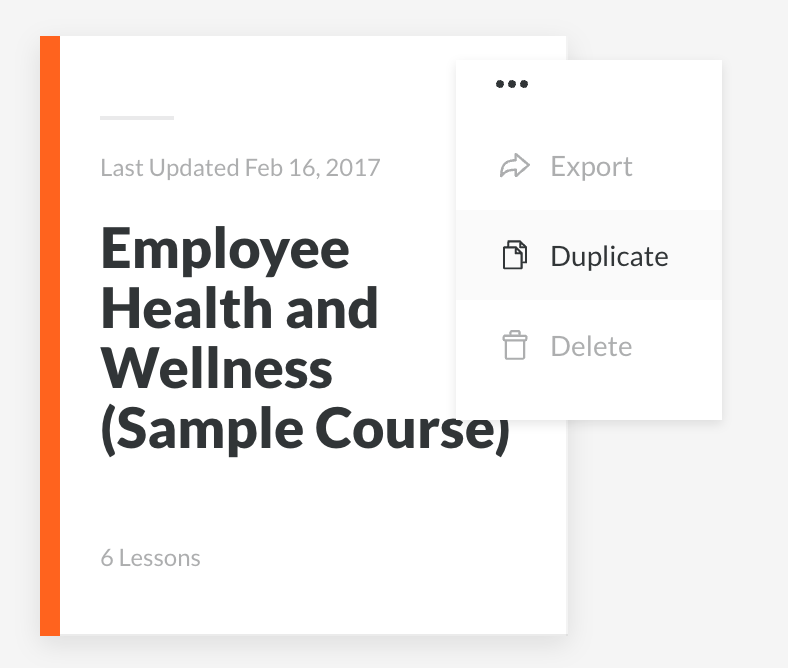 It sounds like the ability to copy a lesson from one course to another would really benefit you. We're always looking for ways to improve Rise, and I'd be glad to pass that idea along to the team! You can keep up with all the new features and releases right here.

Thanks for the feedback!

I did already know about the copy within a lesson and copying the whole course and then deleting, but thanks for pointing those out.

I am really liking RISE!

As my company builds training for many groups the ability to copy lessons and paste in another course would be a great tool for us.

So glad that you're really loving Rise! Thanks so much for sharing your feedback with us here. Always super appreciated, and I can definitely see how that would be helpful.

Also- Just a quick note that when replying via email, your signature carries over to the thread here. You're more than welcome to pop into the thread and edit any personal info out, if desired! ☺️

Any idea when the Collaborators feature will be ready?

Great feature, but we're running into an issue that whenever we share a course it eliminates the links on any buttons.

We have a lesson (task) that has links to the 3 sub-task lessons. When we share the course, the links are all removed.

Oh, and the other annoying thing is that it auto adds the new author to the course even when the first course was hidden.

Glad to hear you like the feature! Sorry for the issues you found. We'll get these fixed up soon. I'll follow up here.

Thanks Mike. Was making me look bad with my client and me feel crazy in my head (I could swear I put in the links).

I have just experienced the same issues when copying a course to handover to a client. The client reports the Labels that I customised on my original version, did not copy over. Also, I had set the author to hidden, but this did not copy over.

Has there been a resolution to this issue?

I saw Crystal just responded to your other post here, so I wanted to link the two.