Create and edit closed captions and subtitles right in Storyline 360 with the built-in editor. Fine-tune imported captions or quickly add new ones with the help of caption placeholders that are already synced with your audio and video content. Here’s how.

Select a video or audio track in your course, go to the Options tab on the Storyline ribbon, then click either Add Captions or Edit Captions. The button will change depending on whether your media clip already has captions.

If you’re working with an interactive marker, right-click the marker, select Accessibility from the context menu, then click either Add Captions or Edit Captions in the window that appears.

You can also open the caption editor from the media library. Details here.

The closed captions editor works with all narration and videos, except website videos.

Explore this image of the closed captions editor and the numbered list below it for an overview of the interface. See the sections that follow for details on each feature. 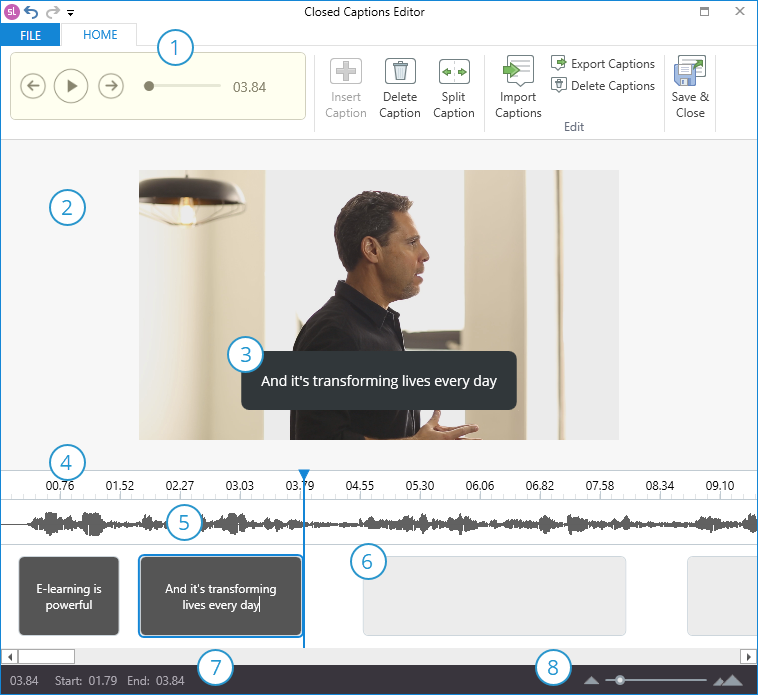 Caption placeholders have four states as described in this table.

The closed captions editor may behave differently, depending on the current state of a caption. See the following sections for details.

For example, if no captions are in edit mode when you preview, playback will continue to the end of the timeline unless you pause it.

However, if a caption is in edit mode when you preview, playback will stop at the end of the caption placeholder. And if you resume playback while the caption is still in edit mode, it'll start from the beginning of the current caption placeholder and stop again at the end. This helps you create captions one at a time, letting you hear a clip as many times as you need while typing.

To preview just one caption, click inside the placeholder so it’s in edit mode. Playback will start as soon as you click inside it and stop when it reaches the end of the caption.

To pause the preview, click the Pause button on the ribbon or press Enter.

Caption placeholders that have text will display on the video stage or audio waveform during preview. (The size of a caption box and the point at which text wraps could change, depending on the size of the closed captions editor window.)

Tabbing Back and Forth Between Caption Placeholders

If no captions are in edit mode when you navigate between them, the playhead will simply move to the previous or next caption, but the media won’t start playing until you tell it to.

Tip: By using the Tab key to move through caption placeholders in edit mode and pressing Enter to play/pause media, you never have to take your hands off the keyboard while typing captions, speeding up your workflow.

To add or edit caption text, simply click inside a caption placeholder and begin typing. You can also paste text from external sources, such as text files or Word documents.

When you click inside a caption placeholder, it switches to edit mode and your media automatically begins playing. If you need to pause it, just press Enter. To resume playback, press Enter again.

If you need to add a line break to a caption, press Shift+Enter.

Speeding Up Your Workflow for Adding Closed Captions

By using keyboard shortcuts, you can quickly add closed captions to a video or audio track in Storyline 360. Here’s how:

Closed captions in Storyline 360 can have bold, italic, and underline formatting. Just select the text you want to format, then use the floating toolbar to make your selections. Or, use these keyboard shortcuts:

You can change the font and font size for closed captions in the player properties for your course. Click here for details.

The closed captions editor doesn’t support voice tags, but you can identify speakers by typing their names with colons before their statements. (Press Shift+Enter to add a line break between speakers.) For example:

If you import a caption file that has voice tags, the tags will be converted to the speakers’ names followed by colons, as shown above.

Work faster in the closed captions editor with these keyboard shortcuts.

Adjusting the Timing and Duration of Caption Placeholders

To adjust the timing of a caption, simply drag the placeholder left or right along the timeline.

To change the duration of a caption, drag either end of the placeholder along the timeline to shorten or lengthen it.

You can also use several arrow keyboard shortcuts in the table above to tweak the timing and duration of caption placeholders.

New captions are four seconds long by default—unless there isn’t enough space to fit a four-second placeholder, in which case it'll fill the available space.

You need at least half a second of empty space on the timeline to insert a new caption placeholder. If there isn’t enough space, the Insert Caption button will be grayed out.

There are three ways to delete a specific caption:

To delete all captions at once, click Delete Captions on the ribbon, then click Yes on the confirmation message.

Exception: If the playhead is at the beginning of the caption and the placeholder is in a blue selected state, all the text will move to the first placeholder after being split.

If you already have captions typed in a document, you can import them via the closed captions editor. Note that this replaces all the existing captions for your video or audio track.

You can also import caption files without opening the closed captions editor. See this user guide for details.

Export closed captions when you need to use them in another project, edit them with a different app, or save a backup copy.

Click Export Captions on the ribbon, choose a location where you want to save the caption file, then click Save.

When you export captions from the closed captions editor, it generates a VTT file.

Export the captions file for each video or audio track in your course, translate it, then import it back into Storyline. Here’s how:

Closed captions aren’t included when you export text strings from your course for translation.

Closing the Editor and Saving or Discarding Your Changes

To save your changes, click Save & Close on the ribbon.

To discard your changes, click the X in the upper right corner or go to the File tab on the ribbon and click Exit.

Showing or Hiding the Closed Captioning Button on the Player

The closed captioning button on the course player is enabled by default, but you can disable it if you plan to build your own custom controls. Click here for details.

Using Triggers to Turn Closed Captions On and Off

If the closed captioning button is enabled on your course player (see above), learners can toggle captions on and off whenever they want. However, you can also control captions via triggers. Click here for details.

Storyline 3: Creating and Editing Closed Captions with the Built-In Editor

Storyline 3: Working with the Timeline