Audio start after all button/layers have been visited and CLOSED?

I can get it so the audio file will play after all these 7 buttons are pushed if the viewer presses the play button again (through variables and triggers), and I can get it to play while the last of the layers is open (by putting the last audio file on it's own layer which will start when all the buttons are visited). But I want it to not start until all of the 7 button layers are closed.

Do I just need to give up and put the closing narration on the next slide? This will get a little difficult because each button has a visited state that looks different from the starting state, so it won't be easy to fit the two slides together seamlessly enough so the viewer doesn't realize they went to a new slide.

You shouldn't need variables.  I've attached a sample for you.  The trick is to change the state of your buttons to the visited state once the user selects the button to close a layer.

That seems promising... I'm still having problems though. Even though I set up the triggers like you did, the buttons are still saying they're visited once I click on them, not when I click on the x to close the layers (even though I set to trigger up that way). I don't have a hover or down state. Is that the problem?

I'd share the slide with you but I can't figure out a way to save just that slide.

1. Delete the built-in visited state on each button

2. Add a new state...call it what you like and give it the same properties that you had on the built-in visited state

3. Now set your triggers to that newly created state instead of your visited states.

We have a winner! Thanks Mike!

This is EXACTLY what I was needing thanks :)

Glad to hear this older discussion still helped you out Paul! 😀

I am trying this. Crossing my fingers.  I am using Markers instead of buttons and layers.

Just let us know if you need any further help :)

It did not work.

The difference between markers and the approach listed here (buttons and layers) is that we're using a trigger on the slide layers to change those unique button states to visited. So, as the last layer closes, we can control that audio playing. However, markers and their labels don't have a similar mechanism. We don't have a trigger that says "When the marker closes..." in which to evaluate whether the audio should play. My hunch is, that's the challenge you're running into.

What I did was: Play Media when timelines ends if, Marker 1 equals Visited, Marker 2 equals visited....

The timeline of the screen where the Markers are being used sets the other triggers.  I have tried using the audio in another layer.

It only worked once and that was because I clicked on the markers before the screen timeline ended.

What I am trying to accomplish is have the main screen play, the user clicks the markers to get the additional information.  When done with all the markers (on Visited state), play the "click Next" audio so they know that they can proceed at that point.  Just like I have done with other screens with buttons, layers, etc. 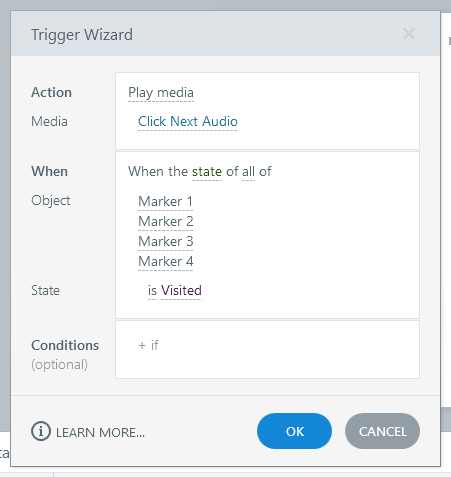 "Play Media, 'click Next', When the state of Marker 1, Marker 2, Marker 3, etc., is Visited." This will cause the audio file to fire once you've visited each marker. Note that you'll need to add the visited state to each marker for this to work.

I see!  So instead of making the state of each Marker a "Condition," they are the object when in the correct state.  I will use that.  Thank you.

This solution was the right one and now everything is playing as intended.  Thank you very much.  I hope the information provided helps others trying to use Markers through this approach.