Attached are 2 stripped-down Storyline 2 files. The only difference is the icon I want the user to double-click. (The background is changed too, but that's not the problem). All the triggers, variables, and the type of slide are the same. (It's a one choice question, which triggers a timer.) I don't know if it matters, but the original icon version is an upgrade from a Storyline 1 file.

When you double-click the original icon, it works. The new icon does not work. What's the difference? I've spent hours trying to figure it out!

When I deleted the Down State from the button, it worked for me.

This is a common problem in Storyline, and one could probably call it a 'bug'.

It's really hard to explain, but when you have have a button with more than one state, and any other state but the normal state consists of an object that was pasted into the state, there is a break in 'action' after the first click. Therefore, you can never have a true double click on a button that consists of these kind of states.

When you delete the down state, as Walt suggested, your double click will work, but NOT on the first try and you will likely experience a few misfires.

I will try to explain with pictures, but I have also attached the file for you to look at.

Below there is a button with three states. 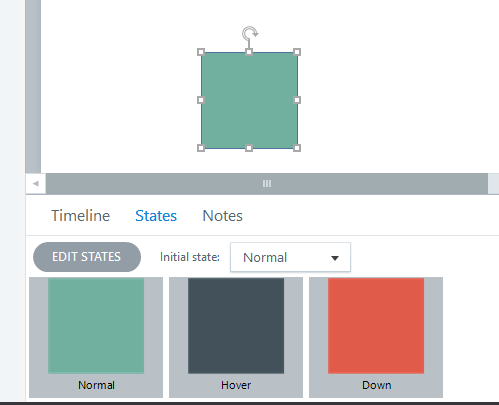 The states were create by simply duplicating the normal state and then changing the color of the boxes.

In this situation, double will work perfectly.

Now I have added another button, next to the first one.

In fact I have simply duplicated the first button. 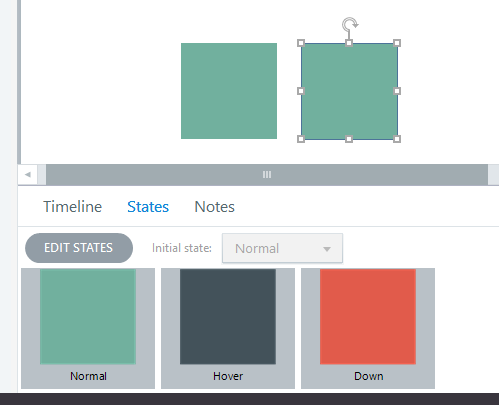 Now, though, I cut the boxes from the hover and down states and then re-pasted them back into the states.

These two buttons look exactly the same, but while the first button will work, the second one will not.

The reason for this is the 'break' in the action chain that happens when one click on a button with pasted states, versus a button with ' native' states.

Here you can see what happens when interacting with the two buttons: 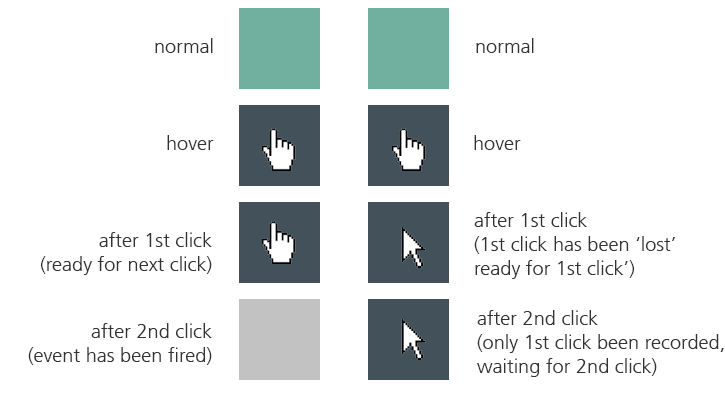 You can slowly click on the two buttons in the attached example, while keeping the mouse still, and see what happens with the mouse.

Now, unfortunately, if you want to use double click actions in Storyline, you will have to make use of native states for your hover and down states - for example a glow, dropshadow, or perhaps transparency.

As for why your original works - it really shouldn't work, but I suspect that with the conversion something forced it to work as expected.

Notice also how in your original, when you try to select the button, you don't get any select marks.

Wow! What an excellent explanation. That is extremely helpful.

In the past, I've built these simulations in Storyline 1 and didn't have the problem. I wonder if this bug only occurs in SL2. I'll test that. I'll also see what I can do with recoloring the same button so it looks like a hover state. Another possibility is switching between identical screens with different icon states.

Do you know if Articulate has the bug on the their list of needed fixes? The way you describe the problem it sound like it might be inherent in SL architecture.

Don't know if this is a reported bug, but it certainly doesn't work as
expected :)

There are lots of little idiosyncrasies like this in Storyline, I guess
one kind of learns how to work around it and so on. :)

Interesting though, if one looks at how double click actions work in for
example Windows, there is not really a down state - normally only a
hover state and a selected state (after one click). Nothing normally
happens on mouse down on an object with a double click action.

I've personally been moving away from using all these states, and just
let the state of the mouse cursor tell the user what's going on!

Anyways, hope you get a workaround for your problem!

Thanks for the explanation and the images - and we're happy to investigate it as a potential bug, but I wanted to clarify that I understood the "bug" element you were referring to. Are you sharing that the built in states are buggy when you have copied/pasted elements into the state and removed the original item?

The first button does work, and I did expect it to work. But if you were copying and pasting into the state and removed the original button that may account for the behavior in terms of not recognizing the double click.

Also, the down state would seem to be a tricky one to use on a double click trigger - as the down state is showing and recognizing that the user is clicking the item. You can review all the definitions here in regards to the states and their built in behavior.

Additionally, we're always happy to look at the files and issues here in the forums and you can also share directly with our Support Engineers here.

Thanks for jumping aboard! I did not replace the original button but still experienced the double-click "bug." Here's what I did:

1.       Add the object that represents the normal state. It will be selected.

7.       Under the Picture Tool tab, click the Change Picture button.

8.       Choose the art for the hover state of the object and click OK. (The art must
match the dimensions of the normal art from Step 1.)

I agree that one would not expect to have a down state on an object with a double click action.

It is however normal for double click objects to have a hover state.

I attach the previous example again, this time with down states removed.

The first button works, but the second button will only work on the second double click, due to reasons I explained above.

I am not sayin that it is a 'bug', if developers are aware of this limitation, then it's fine, but it might be wortwhile to include this limitation in the docs - i.e. when using states containing objects that were pasted in the states, doubleclick triggers might not work as expected".

A double-click operation has a down state on my Window 7 desktop - on the second click. (BTW, I came up with a work-around using a layer.)