However, I am frustrated that the slide editor--and slide preview--in some cases look different than the published output.

In this example, the offending culprit was the background transparency.

This shows what my course exit slide looks like in the preview. 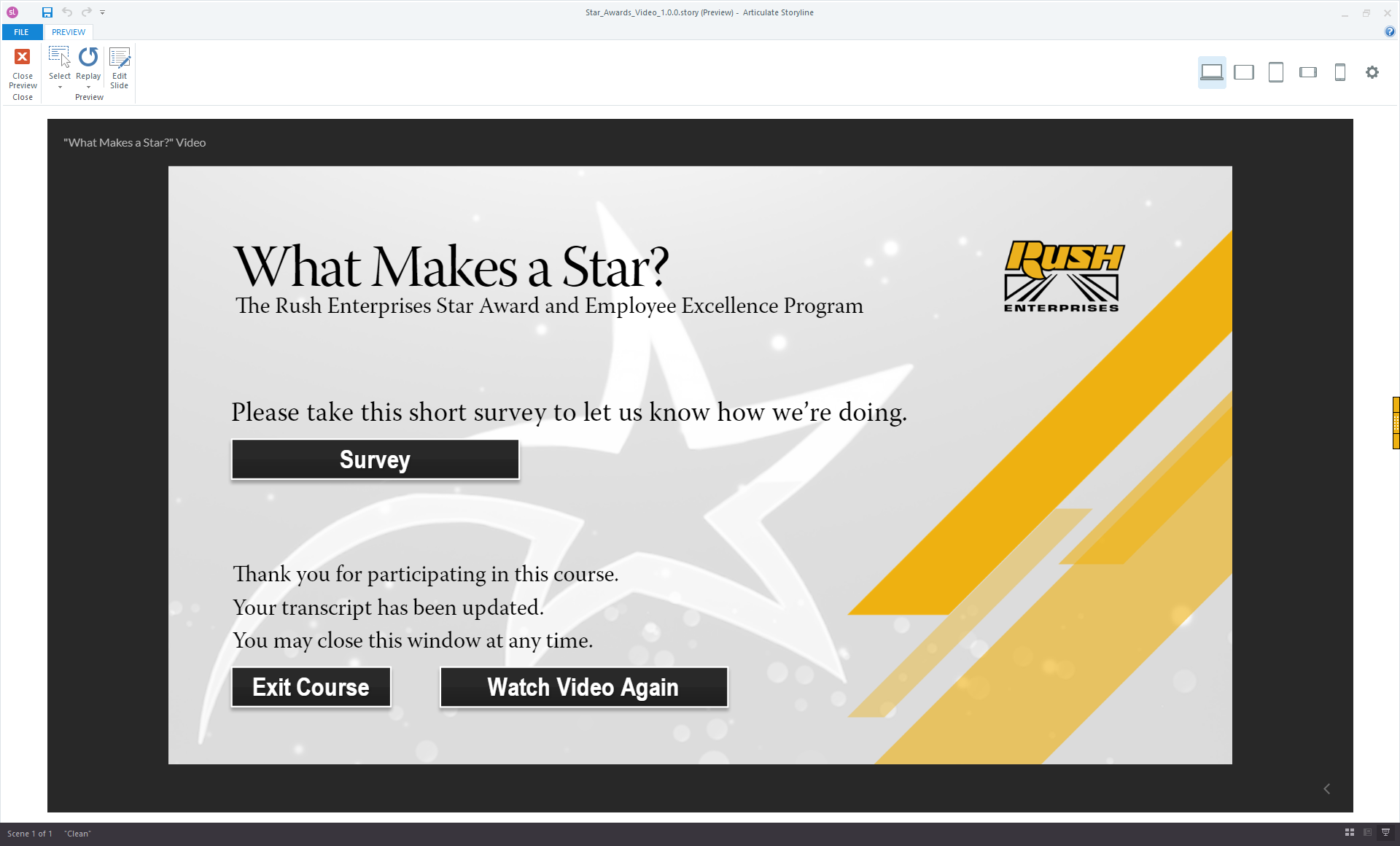 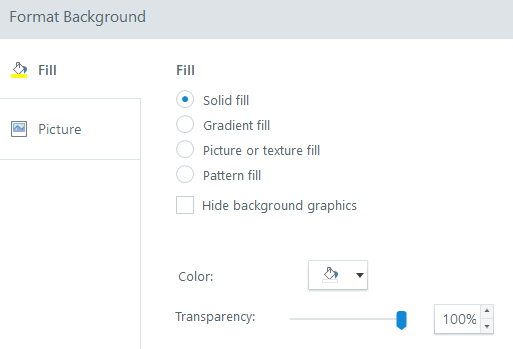 - However, in the Storyline editor, AND in the preview mode, the default white background still shows through my slightly transparent background graphic, making the image display correctly. There was no indication from here that my slide was built incorrectly.

This shows how the dark grey background of the player suddenly comes through my background after publishing. 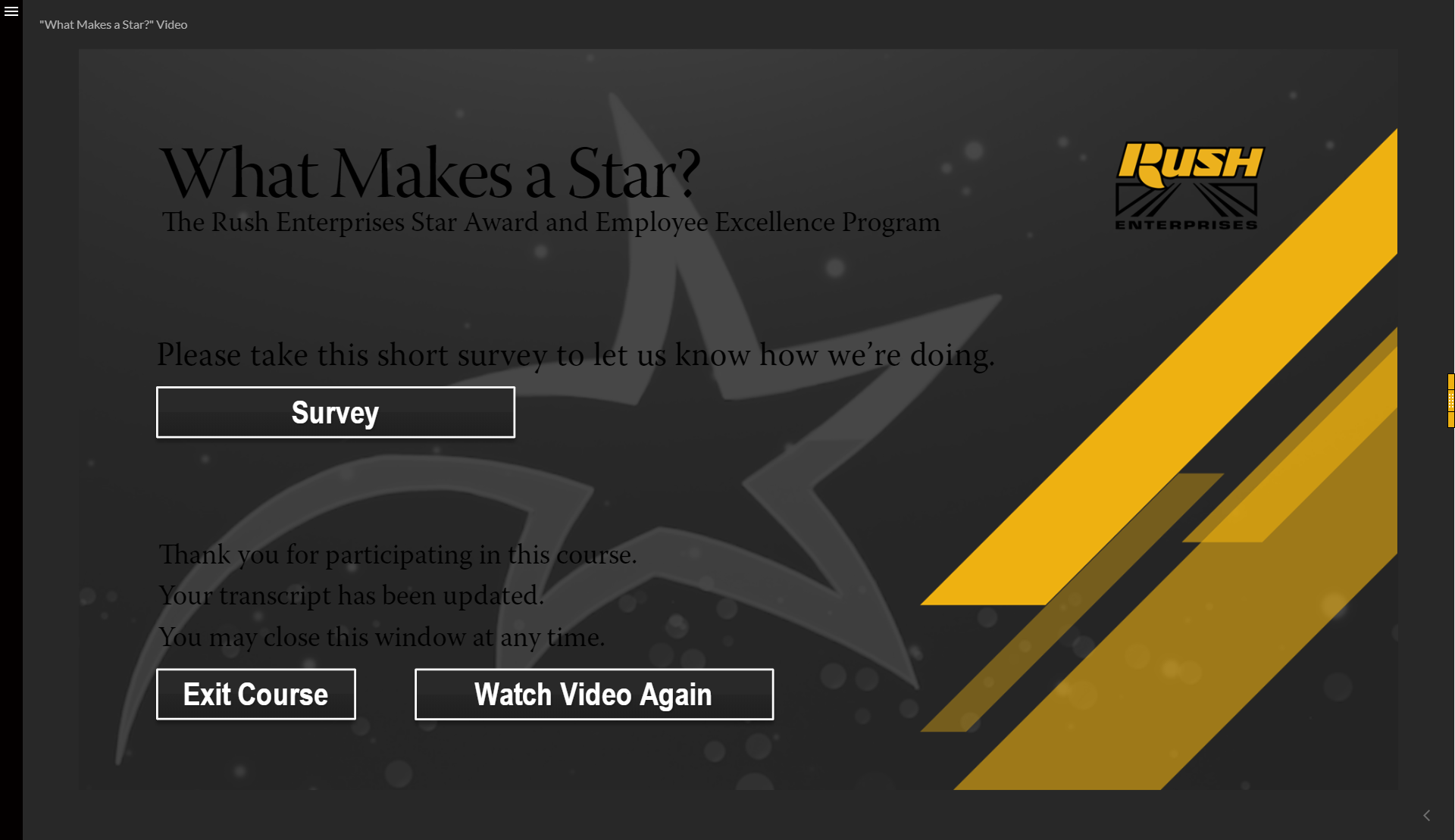 - The effect on the background looks pretty cool, but it's not what I wanted. My text is low-contrast now and the company logo version is now wrong for such a dark background.

- Again, the problem is my fault, but there was no way for me to know this until reviewing the course. The editor and the Storyline preview of the course both made it look like I had done everything correctly.

The immediate workaround is simple enough, fix the transparency setting on the slide background.

But the preview mode (at the very minimum, if not also the editor) should match the published version. This would make mistakes easier to catch and course publishing more efficient.

You're correct, this doesn't look right!

It's hard to put a finger on the exact reason without seeing the settings in your course. Are you noticing this on every slide or just this one?

Would you mind sharing your file with us? You can do so by using the "add attachment" button in this discussion. Or you can share the file privately with our Support Engineers by using this link.

Well, Lauren. I feel a bit foolish now. I found the difference in the slides. I've edited the post above to more accurately reflect the situation.

The Preview is still different than the SCORM output though, which is the point of the feature request I submitted.

Thanks for popping back in to share an update.

Are you using the Modern Player? We do have an issue reported to our team regarding the background color difference in preview vs. published output when using transparency along with the Modern Player.

I'd be happy to add this to the report as we continue tracking this issue and so that we can share any updates with you as well.

Thanks for confirming, Daniel. I've added this conversation to the report.

I'm happy to return to this discussion with an update!

Storyline 360 Update 49 is live: We fixed the issue where the background color changes in published output in both Classic and Modern player.

Thank you for taking the time to report this bug to us!

Glad to hear it. Thanks for the update.

I appreciate those screenshots so I could see what you're describing! From here, I'd like our support engineers to step in to help determine why the background color is changing when you publish your course.

I've opened a case on your behalf, and you should've received an email with a link to upload your file privately with my team. They will delete it once they finish testing!

Get Outlook for iOS