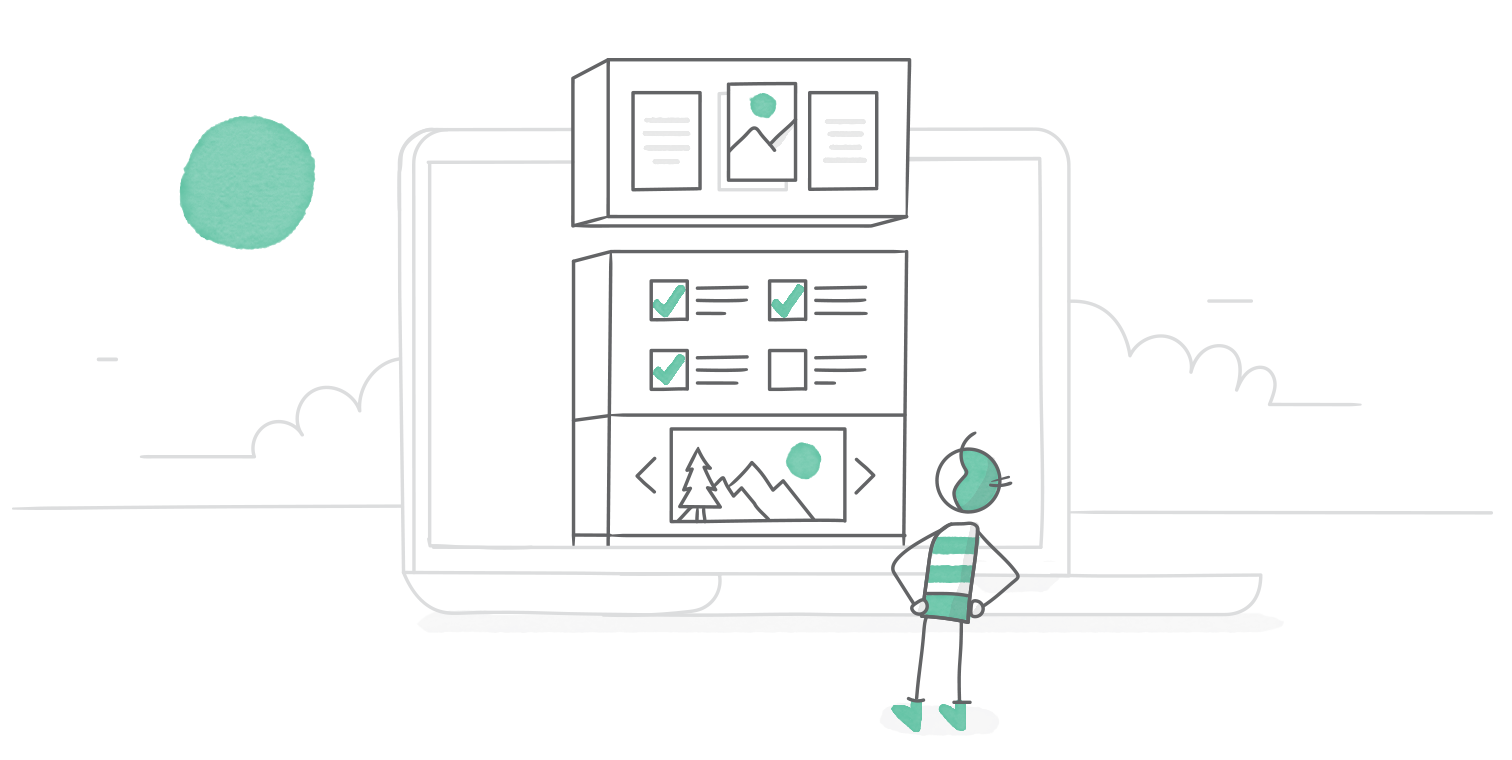 Bullet points have been a staple in presentations and e-learning courses since the beginning. It’s easy to see why—they’re a simple and effective way to organize content. However, like anything, they work best when used in moderation.

Thanks to all of the block options in Rise 360, bullet points aren’t the only fast and easy option for presenting your content. However, if you’re used to relying heavily on bullet points, you might be struggling to come up with ideas for creative alternatives. You’re not alone! Let’s look at some block types that work well for content traditionally reserved for bullet points.

You might wonder, what’s the difference between a bullet-point list and a checkbox list? Interactivity, that’s what! Checkbox list blocks in Rise 360 let learners interact with the content, making them less likely to skim over it. Checkbox lists are especially useful when you want learners to reflect on each item and check it off when they’re done or if it applies to them, like in the example below:

Do you ever use your pointer finger as a guide when you read, to underline the sentence you’re currently scanning with your eyes? Checkbox lists work in a similar way—preventing learners from losing their spot and helping them stay focused on the text they’re currently reading.

Next let’s take a look at another one of my go-to Rise 360 blocks for bullet-point content: the flashcard grid. Using flashcards is a great way to minimize the amount of text displayed at any given time, which in turn reduces the cognitive load and makes it easier for learners to focus.

And here’s another example, with images on one side and text on the other:

See how the images draw you in and make you want to click? If you like the way that looks but don’t have any graphics on hand, don’t worry. Thanks to Content Library 360, you have access to millions of images and illustrations—right from within Rise 360!

You can also use one illustration to represent all of your bullet points, like in the example below, and add interactive markers the learner can click on to view the text.

Illustrations aren’t the only option for this approach; photos can work just as well. Check out the example below to see for yourself:

For tips on finding the imagery you need, head on over to this article: How to Find the Images You Want in Content Library 360.

Another creative way to transform your bullet points is by using a series of large images in a carousel block and adding the text below, like in this example:

Are you starting to see a theme here? Whenever possible, it’s a good idea to use relevant images alongside text-based content. It adds visual interest and breaks up the monotony, increasing the likelihood that your learners won’t gloss over your content.

If your bullet points are longer and you’re looking for a way to make them less visually intimidating, accordion blocks are a great option. When learners arrive on the screen, they only see the titles. When they click on the plus (+) icons, they see the additional information for each tab one at a time, making it easier to digest. Take a look at how it works in the example below:

Note that while the example above is text only, you can also add images to each tab if you’d like. It’s up to you!

Much like accordion blocks, tabs break up your content and allow learners to focus on one thing at a time.

In the example above, each tab contains only a sentence or two of text, but that’s something you get to determine. And, of course, you can also add any other relevant multimedia elements you have on hand.

If you found this article helpful, be sure to check out the resources below for more inspiring ideas:

Want to try out these Rise 360 blocks, but don’t have Articulate 360? Start a free 30-day trial, and come back to E-Learning Heroes regularly for more helpful advice on everything related to e-learning. If you have any questions, please share them in the comments.

I'm sorry, checkboxes are not engaging interactions. Nothing happens after you check the box. It's clicking for the sake of clicking.

I agree in the example they have given, however when tied in with a feedback response they can be very effective.

How does that work?

Just thinking off the top of my head here with an example. How about when you select certain symptoms the pop up can give a suggested diagnosis?

Are there equivalents to these functions in Storyline 360 as well? I already know how to set up tabs and markers, and we're using these to make content accessible and increase interactivity, but I like some of these other features and would love to not have to reinvent the wheel to create these in Storyline!

These are fantastic examples, thanks for sharing! The Covid course is really great content too. May I roll that our in our organisation? I am already a Articulate 360 user and all our courses are created exclusively in Rise. So it will be such a great addition to out suite of courses in these challenging times. Thanks!

How do you turn off the movement for the lists?

Hi Jackie, I'm sorry, I'm not sure what you mean by that. Could you rephrase your question?
Sign In to Comment