Use 360° images to create immersive learning experiences. We’ve collected the most frequently asked questions about the feature below.

As of October 2021, 360° interactions are accessible. You can add alt text to images or videos in marker or hotspot labels, and learners can navigate 360° interactions with a keyboard and use a screen reader for narration. Learn more about accessibility for 360° images.

And we’d love to hear your feedback about the accessibility experience!

Can text in 360° interactions be translated into other languages?

Yes. As of October 2021, Storyline 360 includes text in 360° interactions alongside the rest of your course when you export text to XLIFF or use enhanced Word translation. (Learn more about translating courses.)

And starting with the November 2021 update, 360° images support right-to-left languages.

​​Content Library 360 doesn’t support 360° images. If you need panoramic images, visit this article to learn where to find them and how to create your own.

Slide objects placed over a 360° image stay in the same position as you navigate the interaction, as shown below. Use a third-party panorama editor like Photoshop to edit your 360° image before importing it into Storyline 360.

No, but you can always share your interest in 360° video support by submitting a feature request.

No, but you can embed the 3D model as a web object.

No, but you can always share your interest in VR support by submitting a feature request.

Are panoramas taken with an Apple device supported?

An Apple device’s camera with panoramic mode enabled captures 240° cylindrical panoramas. You can insert such images into Storyline 360, but they won’t render correctly. For the best results, use 360° equirectangular panoramas with a 2:1 aspect ratio.

There’s no limit to the number of 360° images you can add to a project.

Can I customize the interactive elements?

Yes, there are various customization options for markers and hotspots. Visit these user guides for details:

Can I edit the built-in states for markers?

The built-in states for markers in 360° interactions are not customizable. We’d love to hear your feedback! Share the type of states you need by submitting a feature request.

How do I disable the Next button until all markers are clicked?

David Anderson covers several ways to make sure learners view all 360° image markers before clicking the Next button in this video tutorial.

There isn’t a specific trigger that will change the view of your interaction. For a list of available actions, see the screenshot below. You can, however, add the same 360° image to a new slide or layer with a different initial view, then add a trigger to jump to that slide or layer. 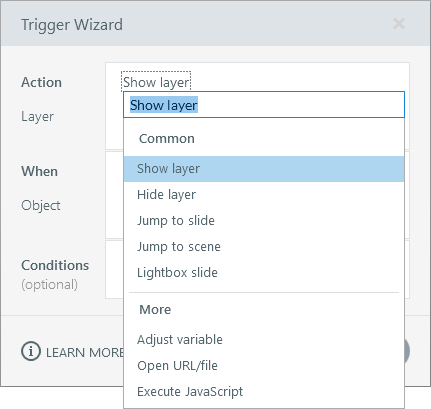 Visit this user guide to learn about adding triggers to markers and hotspots.

Yes, check out the list below to learn about each enhancement for 360° images and when they shipped.

Buttons: Add buttons to marker and hotspot labels in 360° images so learners can trigger specific actions, such as launching a website or downloading a document.

Tooltips: Display tooltips when learners hover over markers and hotspots in 360° interactions so learners know what to expect before they click.

Accessibility: Empower all learners to have the same engaging experience with built-in accessibility features for 360° images. Learn more.

Translation: Localize 360° interactions alongside the rest of your course when you export text to XLIFF or use enhanced Word translation.

To learn which 360° images enhancements we’re working on next, visit the Articulate 360 Feature Roadmap.

We love questions! Just open a support case, and we’ll get right back to you with an answer.