A 360° image is a panoramic photo that captures a scene from all angles. Use 360° images in Storyline 360 to create immersive learning experiences. Engage learners as they explore every angle with interactive elements, such as markers and hotspots.

Watch the following demo to see how it works.

It’s easy to add 360° images to slides, layers, and slide masters. Go to the Insert tab on the ribbon, click 360° Image, and browse for a 360° image from your computer. Need panoramic images? Learn how to find them and create your own.

The 360° image will fill the slide, but you can use its sizing handles to resize it. You can also drag the 360° image to where you want it to display. 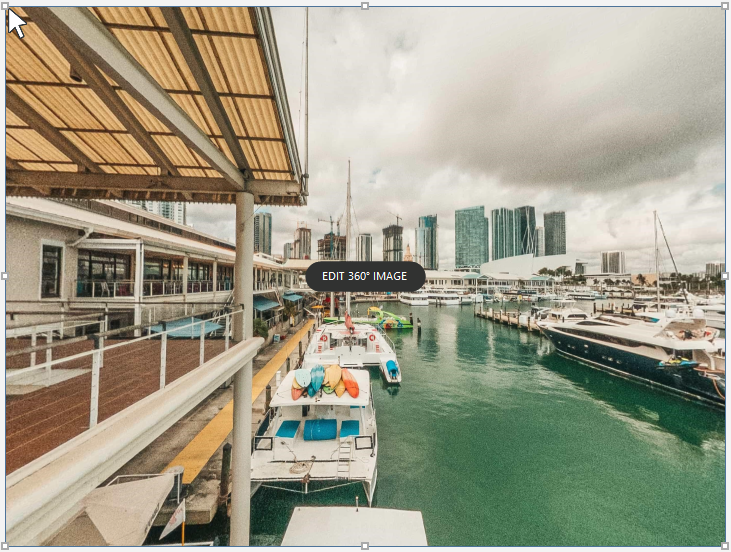 To format your panoramic image as it appears on the slide, select it and go to the Options tab on the ribbon.

Here’s a description of each option.

Explore the following user guides to learn about markers, hotspots, navigation, and interactivity.

Preview the interaction or the entire slide from any tab in the 360º image editor. Just click the Preview drop-down arrow and choose a preview option.

Note: Most content displays during slide preview just like it will when you publish. However, some items are unavailable during interaction preview, such as triggers, transitions, and closed captions.

To save your changes and return to Slide View, click the top half of the Save & Close button. Or, press Ctrl+Shift+S on your keyboard.

If you want to close the editor without saving your changes, click the Save & Close drop-down arrow and choose Close.

You can also press Ctrl+W on your keyboard to close the 360º image editor and open the prompt to save your changes.