To build interactive content in Articulate Storyline, you'll use triggers, states, and slide layers. In this tutorial we'll show you how to use triggers and states to let learners interact with objects on the screen.

In this exercise, we'll create three types of interactions to change the state of an object: click, mouseover, and drag interactions. We'll try out a couple of Storyline's built-in object states and see how they work. When we're finished, we'll have a slide that looks similar to the one shown below. 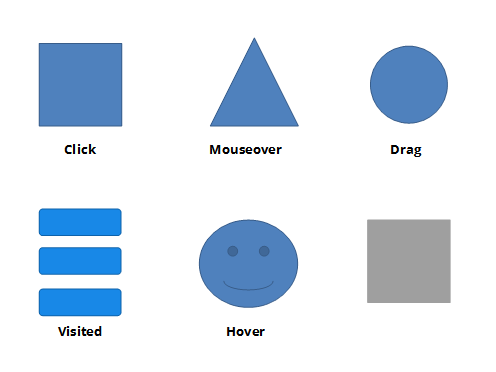 Shapes initially only have a normal state, so we'll need to create a new state for each shape—we'll name this one "Orange."

Next, we'll use a mouseover trigger to change the state of the triangle to Orange when you hover your mouse over it.

Tip: If you want the state change to remain after moving the mouse, you'll need to edit the trigger. Just double-click the trigger and uncheck the box to Restore on mouse leave.

Drag triggers are a bit different than click and hover triggers. Usually, when you create a drag interaction, an object is dragged from one spot to another. This second spot is called a target. A drag-and-drop interaction has at least one drag item and one drop target.

Now we'll see how to build an interaction where dragging a circle over a target shape will change the state to Orange.

Storyline comes with a set of built-in states that don't require any triggers to work. Let's take a look at how they work.

You can find more details on these and other built-in states here.

We've just built three common interactions using triggers. To learn more about all the triggers you can create, try clicking on the Actions drop-down to get a list of all the things you can trigger. Click the When drop-down to see all the ways you can trigger those actions. And don't forget to try some of the built-in object states as well.

After you've played around a bit with triggers and object states, you'll be ready to create simple interactions with triggered layers.

Getting Started with Articulate Storyline 2

Everything You Need to Know About States in Storyline 360

Allison LaMotte
This site uses cookies. By continuing to browse the site you consent to the use of cookies. Learn more here