Today we released a new beta feature in Storyline 360 called 360° images. We think you’ll love transforming any 360° image into an interactive learning experience that invites learners to explore and engage.

Import any panoramic 360° image, pick an initial view, and resize for the perfect fit. Looking for images to experiment with? Try this collection.

Once you’ve imported an image, you can add interactions using markers, hotspots, and triggers to capture learners’ attention and add contextual info to the images they’re exploring. You can create custom markers and add hotspots anywhere on the image.

Finetune how learners interact with 360° images easily. Add progress meters to show learners their progress, and choose how learners navigate through the image to create the immersive experience you want.

Download the latest version of Storyline 360 to start experimenting with 360° images—and share your projects! We’d love to see them here in E-Learning Heroes.

Beta features are early versions of features we’re adding to Articulate 360. We release features in beta to get your feedback on how you’re using the feature and what enhancements you’d like to see.

This first release of 360° images is just our starting point for this feature. Our engineering team is adding more goodness to 360° images, including making them accessible to all learners. Please let us know what other enhancements you’d like to see using our feature request form.

This is great.  I am altering a lesson i am working on changing a new lesson to take advantage of this new feature.

I notice that Storyline automatically creates a variable name for each 360 photo i put in the project.  Is there a way to create a custom name for each of these photos?

You can rename your variables by double-clicking on the variable like in the screenshot below. You can also learn more about 360° image variables in Storyline 360: Adding Interactivity to 360° Images. Hope that helps! 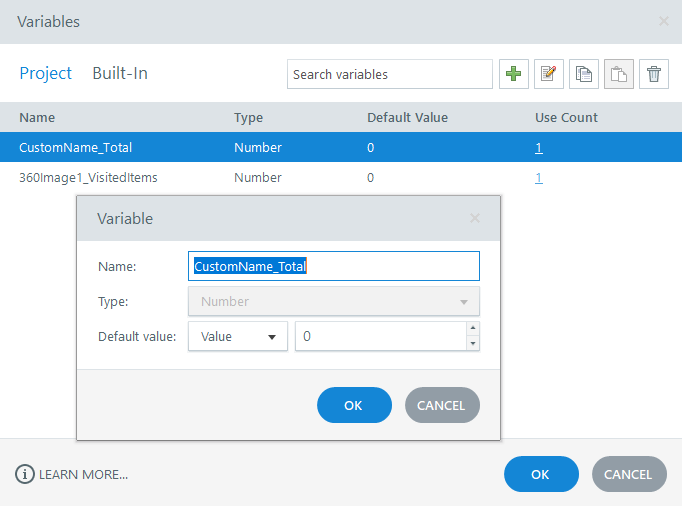 Is there a way to specify the location first seen in the 360 image/video when it loads?

You can set that by clicking the Edit button in the Interaction tab to set a new initial view angle. You can learn more about it in Storyline 360: Controlling Navigation in 360° Images.

This seems like a really great feature - I'm excited to use it! Seems to perform well during my tests.

As an aside, I really like how the new markers work in the 360° image feature (having content library icons integrated, allowing resize, etc.). It looks really flashy and modern. 😊 Are you planning on updating normal markers to allow for this level of customization? It would be great.

Annie, Thank you for the solution.

Loving this new feature!   Used it in my latest E-Learning Challenges demo.

I can see the variables in there already, however I'm stumped on how to set up something along the lines of "change state of Next button when all 3 markers have been viewed". Any tips?

adjust some T/F variable  and then add trigger to change state when variables are true, you will need 3 triggers with conditions based on when variable changes

Excellent addition. I already started using it for a building services course.

I noticed as a default Storyline generates a variable "360Image1_VisitedItems".  Creating a trigger like this should do what you are asking for.  The value 5 aligns with the number of spots that i put on the 360 image. 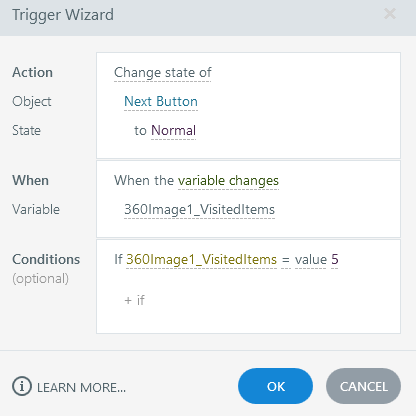 Fantastic new feature. I really like it a lot and it opens up tons of new possibilities. Are there any plans to include the 360° images into the translation export in the near future? Currently it does not seem to work. Thank you.

Great that we can now finally include 360 images, but we are still playing catch up with Adobe Captivate and 3DVista on the 360 capability as they can import 360 videos.

Will we be seeing the introduction of 360 videos in the near future?

So has anyone developed a workflow/ has a resource list for creating the 360 images in the first place? Not having much luck creating something other than a portal to hell with my iPhone… 😭

I am working on a lesson right now utilizing 360 images. I am using an Insta360 One to take the photos.  I then edit out the monopod and downscale the image using Affinity Photo.  I bought the Insta360 One three years ago for personal use.  It needs really good light.  I hope the newer cameras are more light sensitive.

Glad to hear you're enjoying the new feature! In more good news, we do plan on adding translation support in the near future!

I am working on a project that is teaching learners how to inspect a multi-room biology lab facility. It already has ten different 360 degree photos.  Each one has hot spots and layers.  I want the learners to click on each hot spot on a 360 photo before they can continue to the next slide.

I see that i can use variables visited and that Storyline has automatically created these variables.  My problem is that i don't know which 360 photo is which.

I can't seem to rename the "360Image#" myself. I can have a file name at import, and the object can be named in the timeline, but these names have no impact in the list of variable name list.

How do identify that a specific photo belongs to the variable "360Image1_VisitedItems"?

Unfortunately there's no great way to figure out which photo belongs to which variable except by clicking the Use Count and seeing what slide it's on like in the screenshot below. I know it's not the most ideal, but it matches the behavior with sliders and dials. Personally I've found the best practice to be to rename the variable as soon as I add a picture to my project. 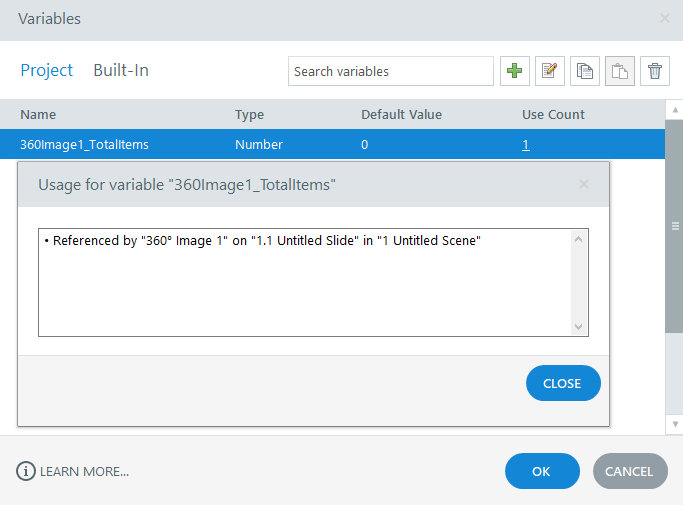 Not sure why you're having trouble renaming the variables, but hopefully this gif will help! I renamed the first variable by just clicking the name. I renamed the second variable by double clicking and renaming in the dialog that pops up. Let me know if you still can't rename variables following either method!

There is Google Street View on your smartphone. The app is free and pretty easy to use. It also imports nicely into SL. Here's a video on how to use it. https://www.youtube.com/watch?v=xk7BhjDWrrg  There are also videos that provide tips on how to take 360 pictures. This video does a good job explaining how to hold the camera and using something like a tripod or broomstick to keep the phone level. https://www.youtube.com/watch?v=wLIzWD1gru8

This is so exciting to see 360 added to Storyline! I have been forced to using other software that are not meant to be for creating eLearning courses!

I have used the 360 feature for couple days now and I have some comments I would like to share :)

- I wish we can add custom hotspots in the feature rather that using the default ones :).

- When jumping between 360 images between different slides, there is a little glitch in the beginning that I find annoying specially when I am using the same 360 image and wanted to feel like we didn't change the slide.

- It will be awesome to have some setting to let the 360 image start automatically from the same position as the previous 360 image and not to set it manually every time.