Trivia Game - Using Variables and JavaScript to remove answered questions from the deck.

Concept
Create a trivia game that would:

How
The key was to use variables to track things and JavaScript Arrays. Many of you have already seen the JavaScript to generate a random number. I just took it a step further by defining an array based on variables, filtering the array to remove 0's, and then pulling a random number from the remaining value set.

I don't have access to a server to post the published version, but below is the .story file. If someone wants to publish it and share a link, that would be awesome. Enjoy!

Update. Dave posted the published version for me HERE.

This is very cool use of JavaScript, Owen. I'll get this added to our downloads hub.

Would you mind sharing your example to our screencast and e-learning challenges?

Here's a link to the published example: http://articulate-heroes-authoring.s3.amazonaws.com/Examples/Storyline/SL2/TriviaGameArray/publish/story.html

Thanks Dave! I've posted it in the Elearning challenge and will screencast it soon, I promise.

David, I loved the example but it appear so small that I almost cannot read the questions and answers. Can you publish and enlarge the result? Thanks!

That is my fault as I designed it the way I would for the users I support. Sorry about that. I did, however, provide the source file in my original post. You should be able to DL the source file, make the size adjustments you need and republish it for yourself. :-)

This is genius Owen, thanks so much for sharing!

Thank you so much for sharing this brilliant activity!

I was wondering if there was a way to get Graded Results once the learner is finished. Also, is there a way to stay in one scene/category, answer all of the questions and then randomly go to another scene/category?

Yes and Yes.  I think we are connected on LinkedIn now; let's set up some time to discuss your specific use case.

Hi Owen - I tried to use this code and modify it in order to randomly generate a unique number and then show the corresponding slide layer.  I theoretically understand creating an array and removing numbers from the array that have been used by setting their value to zero.  I just can't make it work.  Can you help a gal out?  I'm trying to make a "random accolade generator" for my team's Trainer Appreciation Week next week.  I can get it to choose random - but not unique yet.

Sorry for the late response, I've been at a leadership offsite.  Any chance you can share your file so I can see what is going on under the hood?

I'm not sure I did a great job of explaining all of the details when I made this post, but there are some critical steps here.

To keep it simple, let's assume that in Story line I have 5 variables to store values from 1 to 5 and I want to choose a random number. The array will do this fine, but when I send the value back to SL I also need a trigger to set the selected variables value to 0. If I fail to adjust the variables to 0 as they are selected, they will never be filtered out of my array.  In my file, you will see that I perform this on the correct feedback layer for each question when the user presses the button to go back to the main menu.  Make sense?

Thank you so much for your response.  Again - in theory - crystal clear.  I am just not able to make the actual leap to coding it.  Here's my .story file. Thank you!

When I originally posted this, the community "engine" kept ignoring my JavaScript code so I made each line of code a "comment".  In JavaScript, any command line that begins with a double forward slash (//) is ignored. Nothing is happening in your file because every line of JavaScript code is being treated as a comment and not a command. Remove all the double slashes // in the code and it should work.

Ahhhhh!  Thank you so much!  I am embarrassed that I didn't catch that - because I do know that - but I was so focused on whether or not I was getting the array and variables right, I ignored what was right in front of me.

Thank you for your help - you are a kind and generous forum participant!

Hi folks!  I am currently using a version of this code to choose more than one number from the array by repeating parts of the code the number of times that I want it to run.  For example, I have 100 flowers and I want to randomly choose 5 of them, so I copy/paste the last three lines of the code five times.  It works that way, but will become cludgy when I get to the slide where I need for it to choose 50 of the flowers.  I know that there are loops in javascript, but have so far not been able to figure out how to get a loop to work.  Do any of you know how to loop this code?  Thanks!

Are you sending the info back to 50 variables? Or is the outcome a list of 50 flowers loaded into a single variable?

Thanks for your response!  The outcome is loaded into a single variable.  The code that I'm using (which I got from another of these posts but that I can't find now) is below.  I then have triggers that change the state of each flower when the single variable (FM) changes.  It works when the Javascript is repeated because FM changes each time the code runs.  Hopefully, that will also happen in the loop.  Here's the code (with a shorter list of single variables than I am using just to save space):

Ok, I think I get where you are going with this and a sequential loop should work for you. A sequential loop is basically a command statement that tells the computer to repeat the same sequence of commands a certain number of times.

The basic construct looks like this
for ("variable to track iterations with a starting value"; "condition test to stop looping"; "command to update the tracking variable at the end of each loop") {
"code you want to execute each loop";
}

That's it.
So here is a quick example you can try right now in this window. Open up your browser's console. (For most browsers, click in the address bar and push the F12 key.) Copy and paste the following code into the console and execute it.

If I apply this basic looping construct to your code, it would look like this if I wanted to loop through 50 times:

//only need to get the player once
var player=GetPlayer();

Let me know how it goes and if this explanation made sense.

Yes!  That makes sense and it works perfectly!  Turns out I was doing a couple things wrong.  I'm a trial-and-error user of javascript, in that I search the web for bits of code that do what I want and play with it until I get it to work.  But, this one was eluding me.  Now, I just need to work out the logistics/connections of the different slides and get my math to work correctly.

Thanks very much for the help!! - Eva

That is exactly how I learned what I know about JavaScript!
Feel free to connect with me on LinkedIn and I can try to assist with other JS questions you might have.

Thanks!  But, I'm afraid that I'm not a member of LinkedIn (or any other social network).  I find that because I already do so much on the computer, I don't want more accounts to keep up with.  So, I've never joined.  I did find your info on LinkedIn though and will be able to use that to contact you if I need to.  I really appreciate the current help and offer of future aid!  I would post a link to the material I used your code in, but the server I put those things on is currently down due to a fire and I don't know when it will be back in working order.  -Eva

Could anyone help me use the trivia array while removing some questions or characters?  Which code would I have to alter to make this happen.  I have made several attempts, but must be missing something.

Probably quite easy to solve your issue Paula. Do share a sample of whats going wrong and/or your Storyline and im quite sure someone will help.

I have changed the variables to remove the 4th question in each section and removed the questions, but the character continues to come up after questions  have been asked and at that point, the user has no further options (i.e. continue button, etc.)

After some digging to understand the logic of it, the solution was easy. To help you solve this kind of things yourself i am gonna explain what i did.

I added a textfield to the MasterSlide referencing and showing all variables i thought were important in the setup. 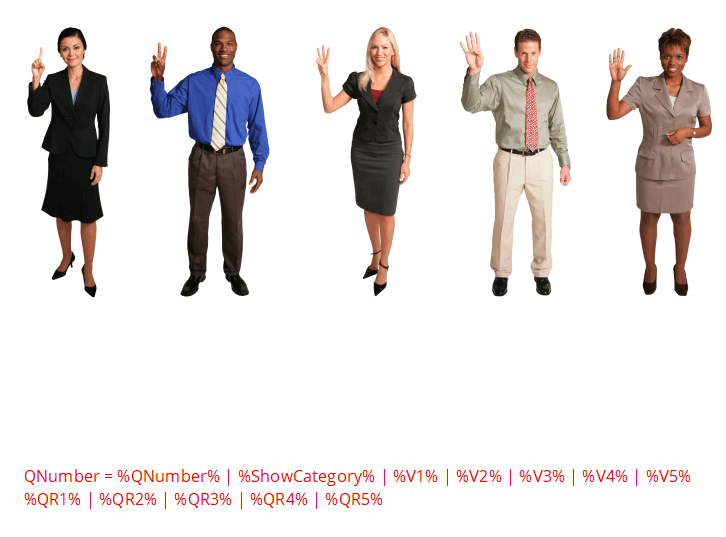 All questions i added an asterisk * behind the proper answer, so i could test and check off all quickly without errors... and having to redo questions ;-)

Then i published and tested the Storyline. I noticed that when a question was answered correctly 1 was deducted from a variable. Depending on categorie either QR1,QR2,QR3,QR4 or QR5. And that was the clue. In the Storyline those variables were hardcoded to 4. Because you removed 1 question from the categories those didnot match anymore.

So your solution is simple. Change those variables to 3 and its working fine.