Now that you know a little about the model, let's take a quick walk through of our new course and look at some key differences between this new version and what we created earlier. First, we'll look at the main parts that make up the RSI model. 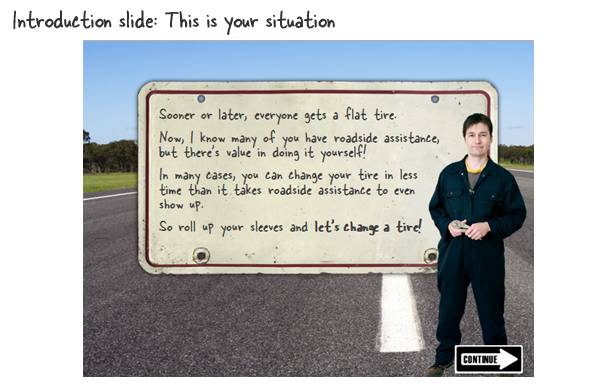 Looking at the first slide, you can see the visual design is similar to the last course. It's still important that our course's visual voice aligns with the learning voice, but the main focus in this project is making the course feel more interactive.

So while the Introduction slide looks similar to the last course, it's actually only slide that gives information to our learners. In this slide, we're setting the context for how the learner will use the information.

From here, the learner navigates the course by reflecting and making decisions. The course is still linear, but the framing of the content makes the course feel more interactive. 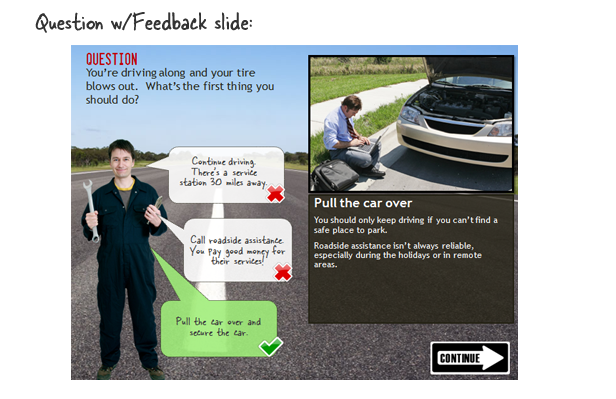 Here we get learners to think about the information. We do this by framing a situation where learners would need to use the information. So in our course, we're framing the situation by telling learners, “Your tire’s flat" and then asking, "What are you going to do about it?” The questions are used to stimulate reflection, so it's important they're meaningful and realistic. Think of it less as a scenario and more of mini-scenario - the kind of scenario you could Tweet. 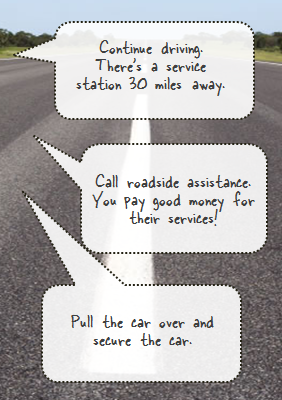 Notice how the same content used in the original course is now broken out into the choices? This is intentional and an important part of the model. Both the correct choice and the distracters are used for teaching. 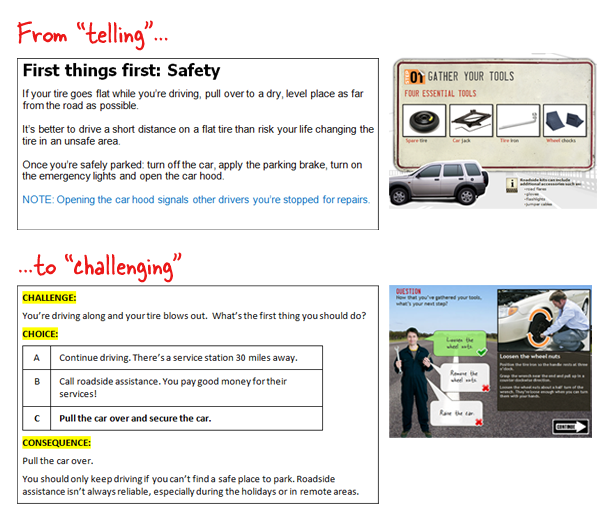 NOTE: Tire changing is a simple process with a fixed number of steps. This means there are fewer viable choices at Step 8 than there were at Step 1.

Consider a corporate ethics course. It's easy to imagine a question with three correct choices, but maybe only one choice is the expected behavior. It could be a great way to challenge assumptions while igniting conversation among your learners. 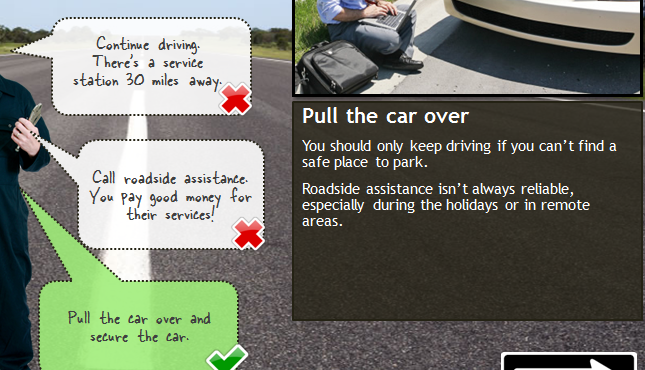 Meaningful feedback is important in any course. And in RSI, we use it a couple of ways.

This is an important feature since we're using the feedback to teach why their choices or assumptions weren't correct and build off of what the learner thought about.

We don't just tell them the correct answer, but we address the incorrect choices and teach them why those answers weren't correct. It's the same content from our original course, but reframed into more of an interactive conversation.

Navigation: One big Next Button

Here's the best part: All of the choices go to the same slide. The choices are really one big Next Slide button.

In the example below, I have the buttons set up as individual hyperlinks for each choice. You could save some objects by making one large transparent shape hyperlink to the next slide. Either way, the learner advances by making choices rather than clicking the player's Next button. 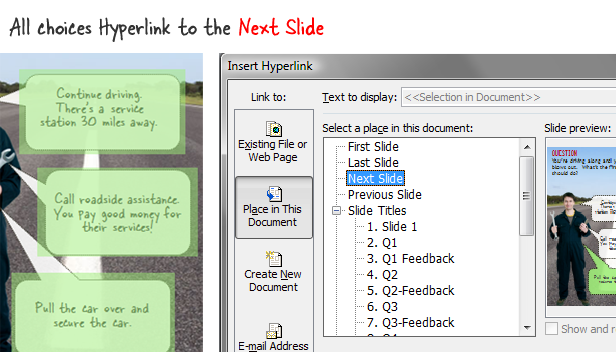 Is this as simple as it seems?

It is that easy! It’s two slides: Question and Feedback. Now, you could have different slides for each feedback A, feedback B and so on, but essentially this is a two-slide interaction that repeats as many times as you need.

"Would you use RSI to replace a linear course?"

Probably not. Think of RSI as a component of a larger course. Tom often refers to Legos and building blocks. RSI is just one lego in an overall bigger structure. It could replace or augment existing scenarios and learning interactions.

"Could this model be used in place of a final quiz or assessment?"

Absolutely. RSI can make a great chapter or course review exercise. Because it's less focused on scoring learners' choices, the feedback slides can help reinforce expected behaviors and choices.

Okay, that's about all you need to know about the model. In the next lesson, we'll start building the question slides for our new course. 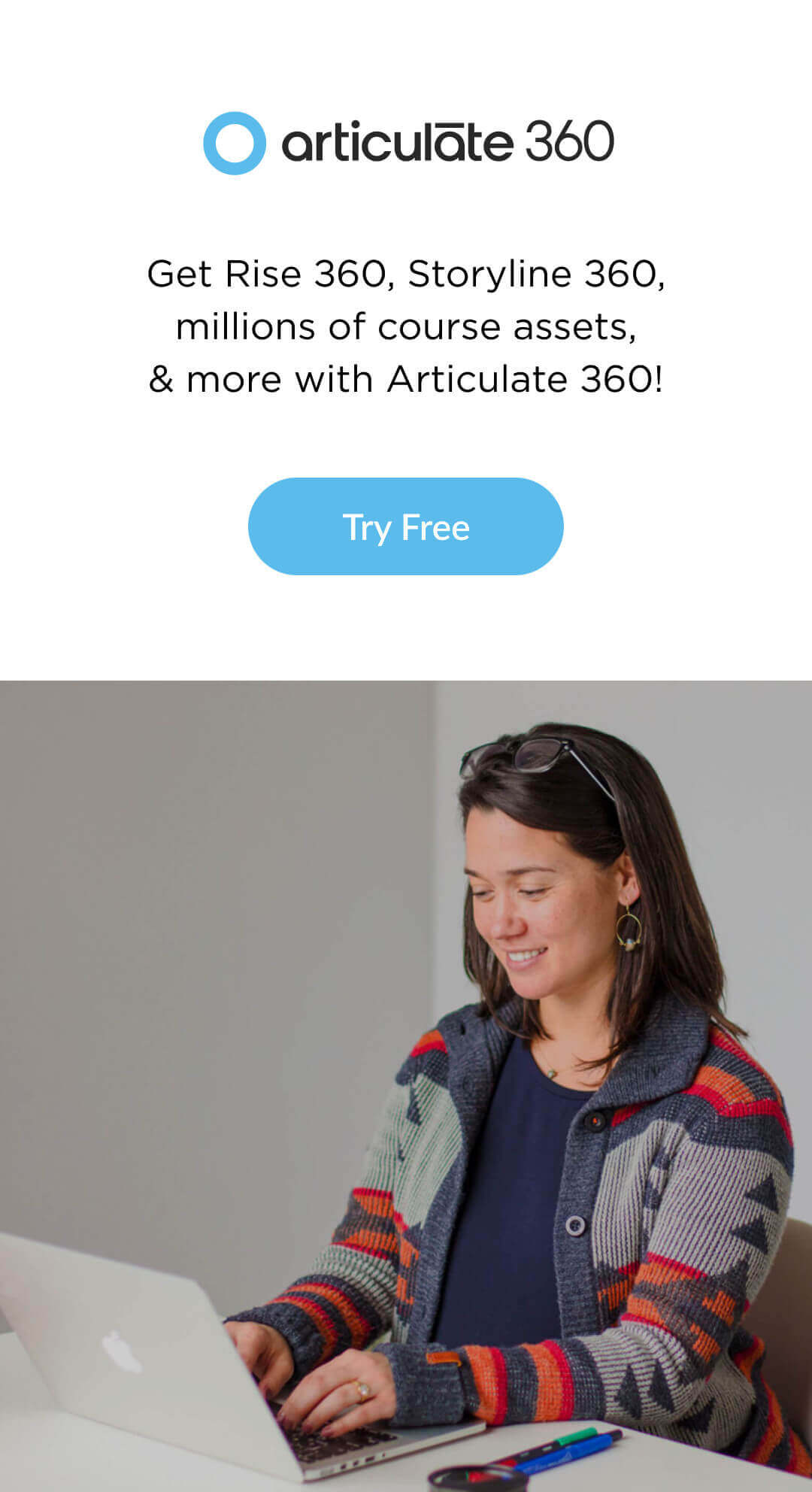 Dave - how did you get hold of the Articulate "Annotate" Ticks and Cross images, to use as standalone graphics for your answers? Many thanks.

Hey Bruce - I think they have an inside man:) You can grab them here as well: http://community.articulate.com/downloads/g/icons/default.aspx

Thanks Steve - how did I EVER miss that set of downloads!! Brilliant resource :) Bruce

Thanks! I'll use this at once as a model for our work...

This helps me with a project I have in my pipeline. Its a little survey course which needs some interaction. I like the "turning around" of the declarative statements.

Thanks for the post! This sheds a little light on how I can make manufacturing process training a little more tolerable - and effective. Great advice as always.