Can I prevent "NaN" from appearing in numerical entry?

Is there a way to do this?  Am using conditions to handle which numbers ARE allowed and to display an error if invalid numbers are entered.  But can't get it to stop letters etc from being entered/processed.

Hopefully I'm having a Friday moment and missing something simple

But if that was the case, then surely you'd have this issue when having to us numerical entry, e.g. for calcs etc.  If you still want to collect numbers but don't need to calc them then I guess you're okay.

I'd like to see an answer to this as well.  If a user backspaces over the 0 or whatever value is in a numerical entry field, and then clicks outside the box or hits enter for whatever reason before making an entry, "NaN" will show up in the field, indicating there was a non-number entry attempt.  This is a bit of a usability problem in that there is no way to override this with a more user-friendly phrase like "number required" or "invalid entry" or just a default of  "0" in the case of somebody clearing/backspacing and clicking out with no entry at all.  To many non-programmer users, "NaN" is meaningless and could be very unexpected and confusing to a user.

I tried to check for this as a condition in a trigger that would replace "NaN" with something else when it appears,  but it doesn't seem possible because the "equal to" value selector does not allow a value of "NaN" to be specified, since it's not a numeric value. And, if trying to compare it to a text variable set to "NaN" that doesn't work either because text variables are not allowed to be compared to numeric variables in the conditional expressions -- these restrictions make sense generally, but they also preclude any workarounds. .

Has anyone found a workaround for this?

IIRC, switching to text entry (instead of numerical) means "NaN" no longer appears.  At least I think that's the case seeing as I did this 3 months ago.  If you only want the learner to enter numbers then you can use conditions to ensure this is the case.

Simon --  yep, thanks, I get that for cases where treating numbers as text is sufficient.  The problem is that in many common use cases (as you mentioned earlier in the thread), there's a need to be able to process numeric entries as numbers --- ie, use numeric operators in the condition expressions for things like range checking, or to any kind of calculation. These operations require the use of numeric variables ---  then we're back to the NaN display issue.

If there was simply a way in the conditions menus to check for "NaN" as the current "value" of  a numeric variable, then we could replace NaN with something useful and understandable by all users (such as setting it to a proper numerical reset value and/or displaying "please enter a number" as feedback in an adjacent textbox for example.

Some solution for this is fairly essential, imo, for getting basic usability in place when numeric entries are involved.  I suppose if there's no direct workaround in SL itself, javascript could be used to check that variable for the "NaN" condition and then set other variables as needed for feedback or value reset.

Yep, can't argue with you there Doug.  This does need addressing.  Have you submitted a feature request?

Not yet, but a feature request probably makes sense for this issue, as it doesn't seem a direct solution exists currently.

update:  feature request has been submitted.

I gave this problem some more thought today, and did finally find a way to workaround this within SL (it seems), but the solution is somewhat complex. I've attached the story file for anyone interested in seeing/trying the implementation. The result is that I can detect a NaN entry (the basic problem we were discussing above), then overwrite the "NaN" display in the field with a more meaningful/desired default value (in this case, that's the number 0), and pop-up a feedback message indicating "invalid entry" as a way of getting good usability for this type of entry field.

The core breakthrough here (at least for me) was realizing that the NaN condition could be detected by evaluating the entry value against the condition of all possible numbers (the conditions being IF less than or equal to 0, OR  greater than 0 ---  in other words, all numbers ---   this seems kind of obvious in retrospect). This is detected and acted on with a set of sequential triggers and intermediate variables as shown below.  (since the conditional choices in the trigger wizard do not support "Not" conditions for the comparative operators, the logic ends up needing to be a lot more complex than it would have been otherwise, because I can only detect and qualify a trigger based on the entry being a number, rather than on not being a number).

The logic is based on a boolean "isNaN" flag variable that gets initialized to true, and is then reset to false if the entry is a number using the conditions mentioned above ---  this will evaluate each time an entry is made. The sequence (order) of some of the triggers that are driven by a change in the "copyOfEntry" variable is crucial -- this is a good example of how multiple triggers (based on the same event) need to be laid out in a precise order, and how that order of execution can be used to your advantage. The intermediate "copyofEntry" variable was needed as a proxy variable for the raw input value, otherwise the action of resetting the raw variable to zero (when NaN occurs) causes a sort of recursive event loop problem (if only one value variable is used).  The feedback message is implemented on a layer. The two added "numeric entry" object triggers are needed (one for loss of focus, and one for the enter key) so that either clicking outside the field or hitting enter will cause the value to be processed as a new input. 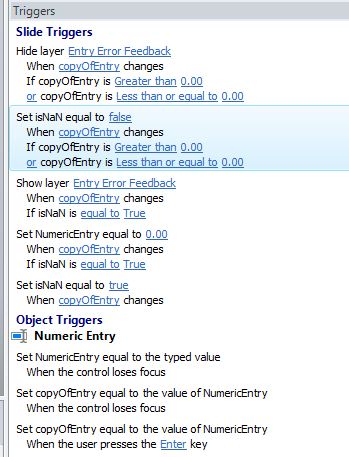 If anyone can see an easier path to achieving this, I'd love to see this simplified, but this does seem to do the trick for me at least. While this works, it does seem like logic overkill for simply dealing with the NaN issue.. It would be much better if the NaN condition could be added to the SL condition options dropdown for numeric variables to make such handling a piece of cake.....  and it would be nice if "Not" operators were allowed to be optionally added in front of the conditional operators (that would have cut the complexity here in half). A feature request has been submitted for such NaN condition checking.

note: the condition check mentioned in the second paragraph above didn't come across:   It should read " IF less than or equal to 0, OR greater than 0"...  in other words, all numbers.

Glad you found a work around.  However, wouldn't it work to set the numeric variable's default value to zero?

The default value (that is set when you create the variable) really just determines the initial value of the variable before any other action changes it.  It doesn't "restore" the variable to this value in any way after the value is changed, so the default value is only useful for setting initial conditions when the app first starts.

Idid some research and I found JS solution:

Another possible way to avoid nan is by using an execute JavaScript trigger after the setting the variable value:

This is the JavaScript code to run:

Another possible way to avoid nan is by using an execute JavaScript trigger after the setting the variable value:

This is the JavaScript code to run:

That's  a nice one Lea. Javascript to the rescue (again)!

Thanks Lea for sharing the javascript code here with us!

I'm having this issue now and it's two years down the track and 4 years from the start of this thread! Does the feature request function work? Seems crazy that this bug is still there after such a long time.

Thanks for coming to share your need for this change and feature within Storyline, and I'm sorry it's caused you difficulty as you build your courses. Our team does keep an eye on the ELH forums and that feature request form, and uses all that information when looking at ways to update Storyline. Each feature idea is tracked thru that form and as our team looks at creating them, they focus on how many customers are impacted, what other workarounds or solutions are available, and the overall impact on the product (if it's going to change anything else about the way it works). All that information is used to determine priority and it seems this set up hasn't risen to that highest level yet. I hope that offers a bit more insight into the process and please continue to keep us in the loop on what you'd like to see in Storyline or our other products!

Hey Simon, I had the same problem and I tried to leave with a 0, this way, in a group it can calculate the sum of the fields.
I see that this conversation is from 5 years ago, so I hope you had solved XD, but if can be useful for other people I did this:

Thanks Miquel! Never too late to pop in and assist as it could certainly help someone in the future :)

Welcome to E-Learning Heroes by the way ☺️

Could you provide a little more insight on how to plug this into a course?

For example, the variable I'm trying to keep from being NaN is labeled "NumericEntry1"

how to remove that NaN in age field

@Divya,
Your requirement will be pretty complex because you will require three separate boolean IsNaN variables to separately test each of the numeric values Year, Month and Day, and then display an alternative Age value if any one of them is a NAN value.

This might be easier to do in JavaScript where the Number.isNaN() function is readily available.  I could help but you would need to provide:

I would like to add up a couple of numbers in Storyline 3.  I thought I could use the number entry field to do this? The number goes in fine but when I try to add the value that was entered to a variable to add up a score, I get the NaN issue.

Is there a simple way around this yet?  I am really suprised Storyline can't add a number(s) to a variable.  Maybe I am missing something here?

I have tried the following workarounds:

1. setting the value of the total variable to 0 when the timeline starts.
2. changing the state of a tick/check image if the correct number is entered to normal.
3. using a drop down question but I have several of the same numbers including 0 to select.

None of these work.  I don't quite get how to apply the javascript so haven't tried that.  Any explanation on how to add that would be helpful.  e.g. do you just add the script and replace  inH1 =  numericentry1 variable?

Many thanks for any help with this.