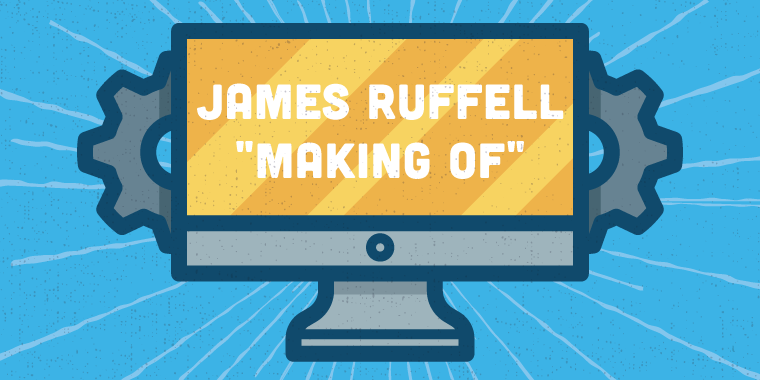 Sliders in Storyline 2 are a simple and engaging way to add interactivity to your e-learning in new and exciting ways. At Ashorne Hill we had great fun, and the odd head-scratching moment, developing a technique that uses a slider to explore an interactive 3D environment. Hopefully this post and the accompanying video will shed some light on the process!

We wanted to create an  interactive workshop scene. Key parts of the scene deliver feedback but are not all visible from a single viewpoint. We opted to create an immersive 3D environment in which the learner could move around to discover the clickable objects.

Using graphics software we created a 3D model based on reference photos. We set up a virtual camera to point at the middle of the scene and animated to move around it from side to side. Scrubbing backward and forward through the frames of this animation creates the impression of moving around the scene and investigating it from different angles.

We wanted the motion around the scene to appear smooth and, after some testing, decided that 40 frames provided the right balance between the quality of the motion and time to render and set up. 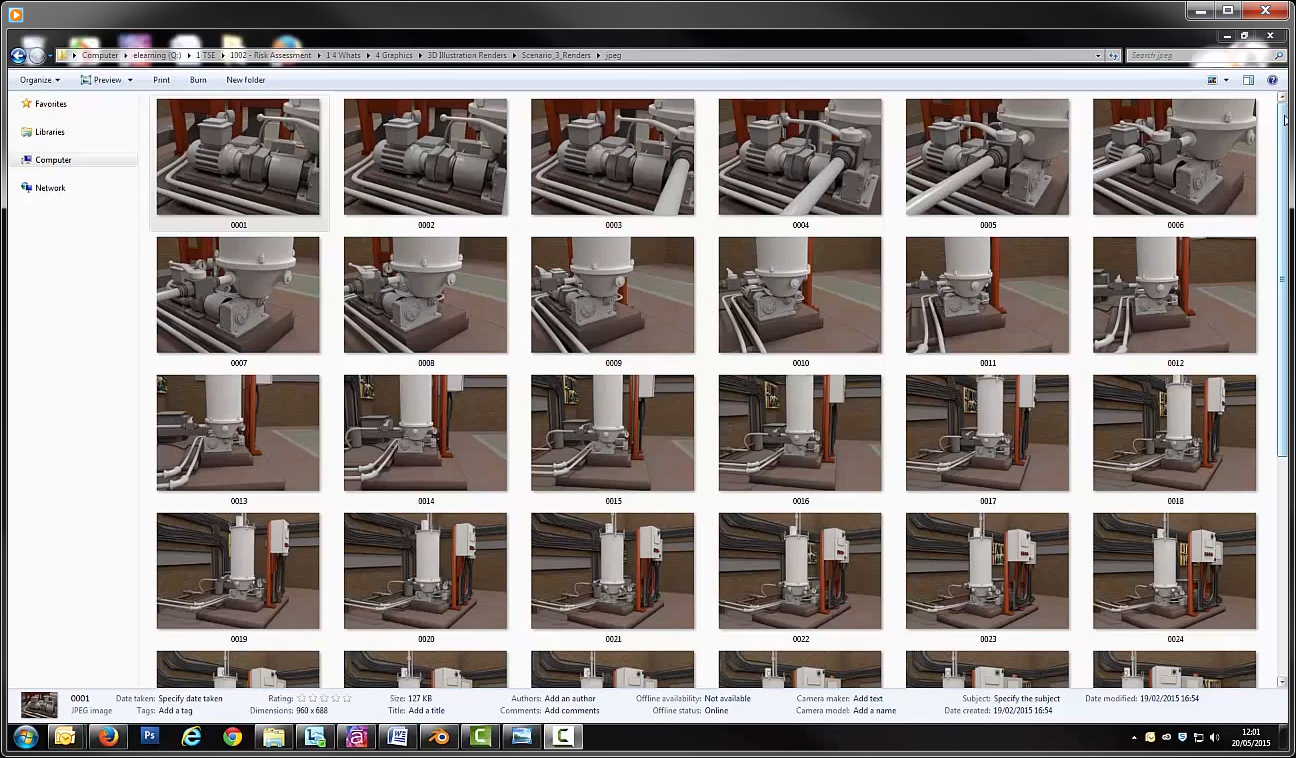 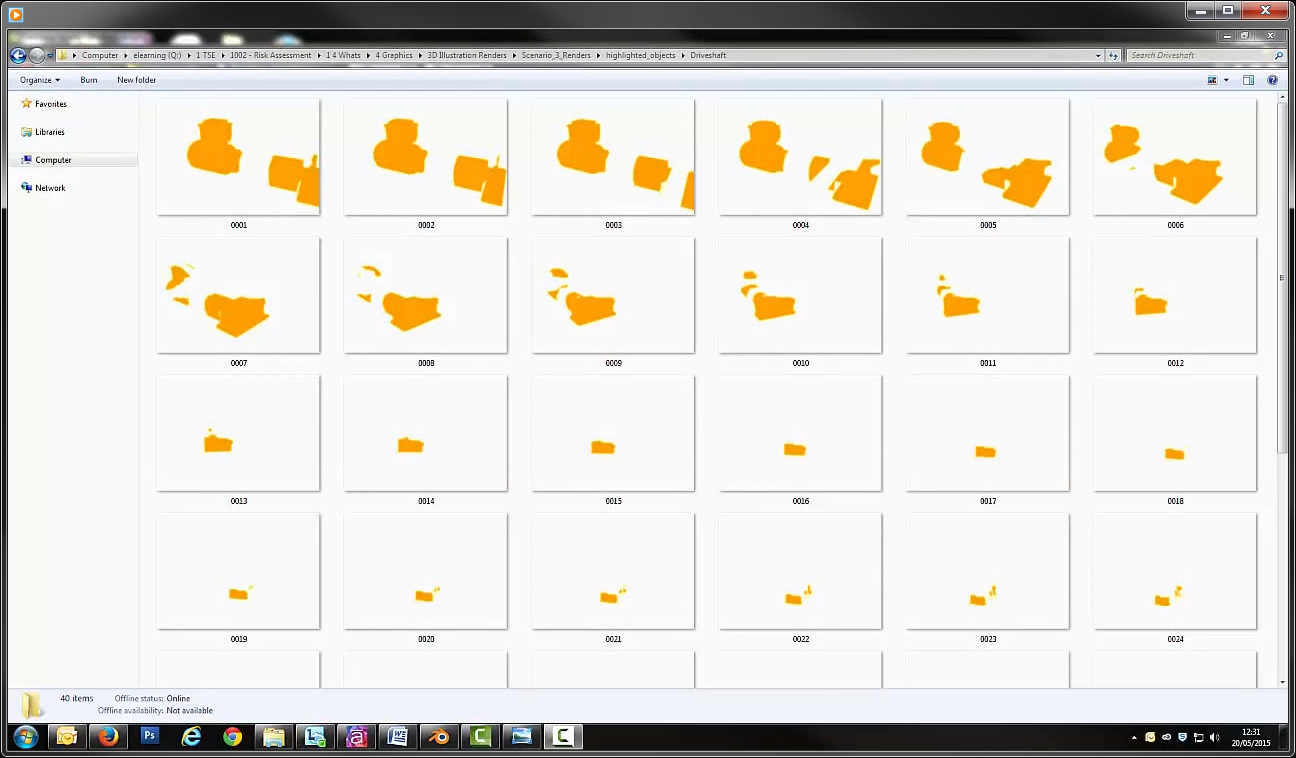 For each frame in the animation, we rendered out several different images, the main color image of the scene, and transparent PNGs, which are used as hover states for the clickable objects. 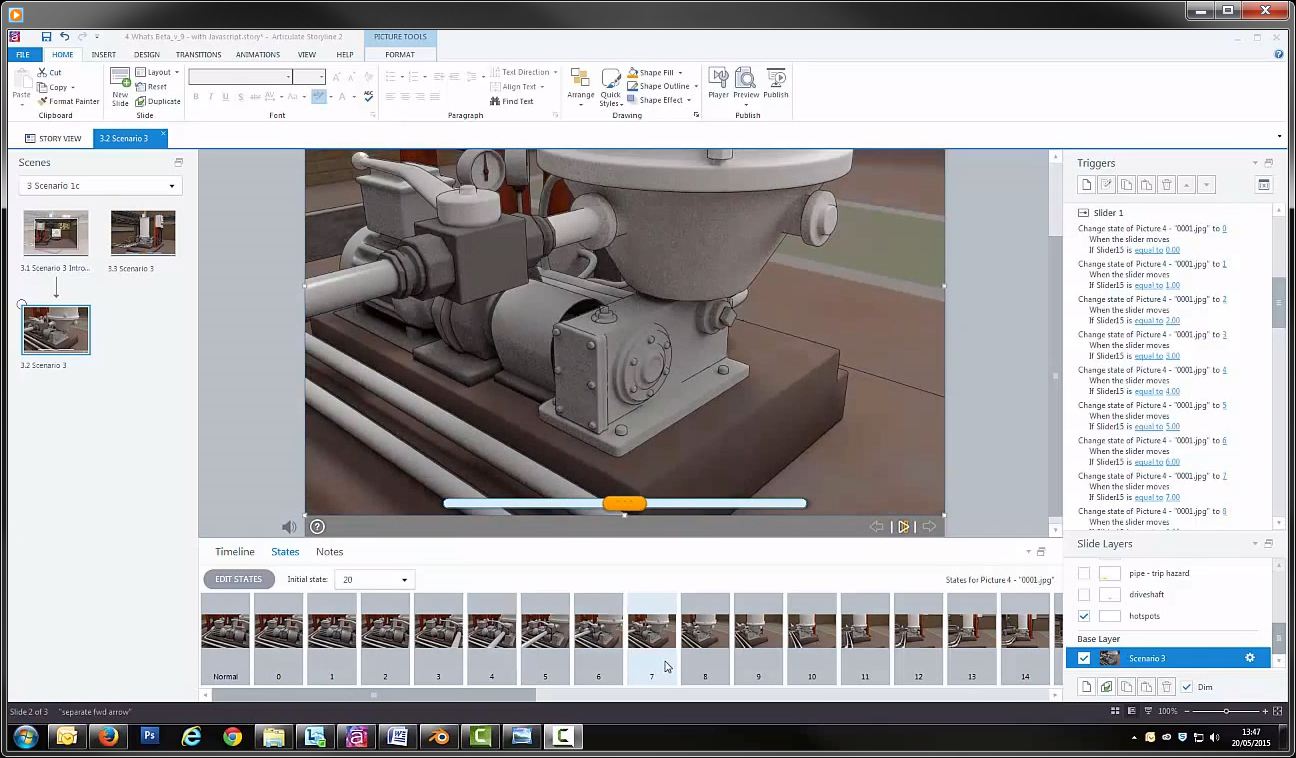 With the graphics created, we moved into Storyline 2. On the base layer, we set up the main color image with a state for each of the 40 animated frames (this was actually 41 states including 0, so the slider that controls them could have a center point (at position 20) – we used one of the frames twice!). We set the image in each state to the corresponding animation frame. 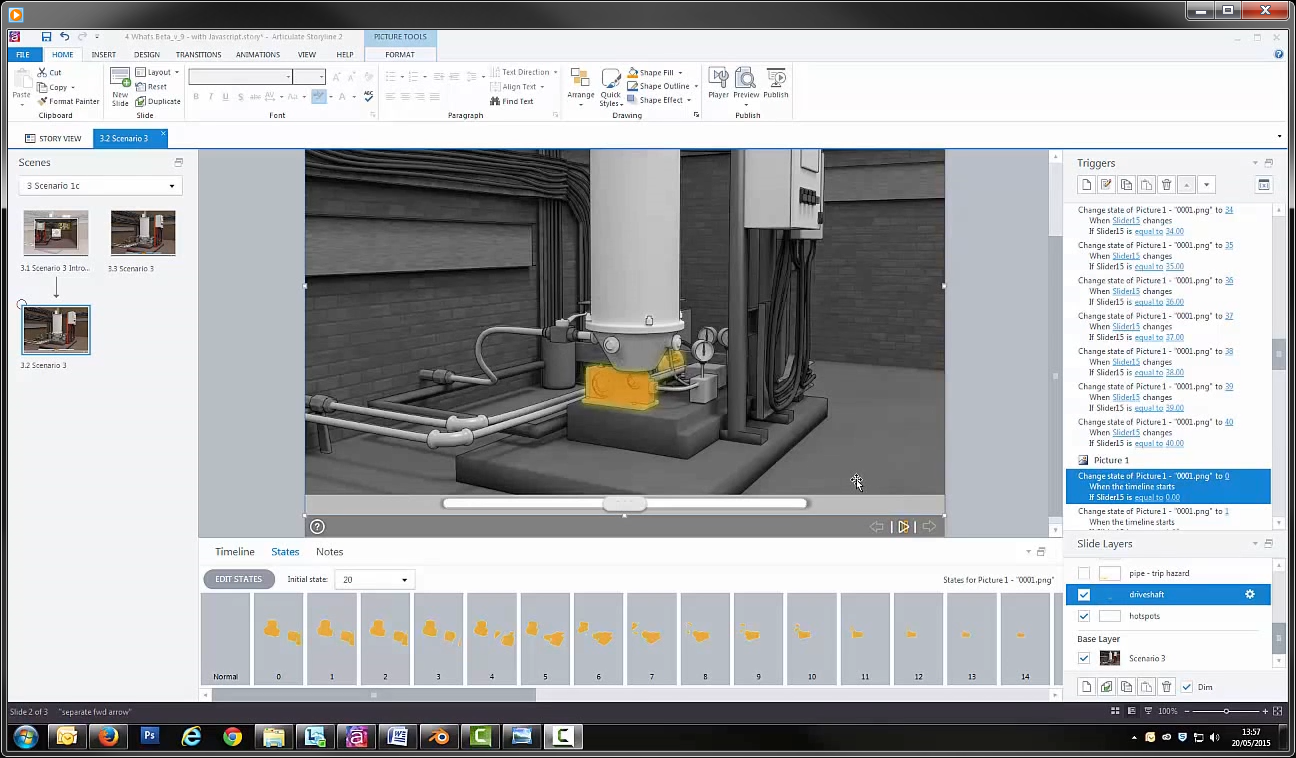 Next, we created a slider starting at 0, ending at 40, initial position 20, steps of 1 and set to update variable when dragged. 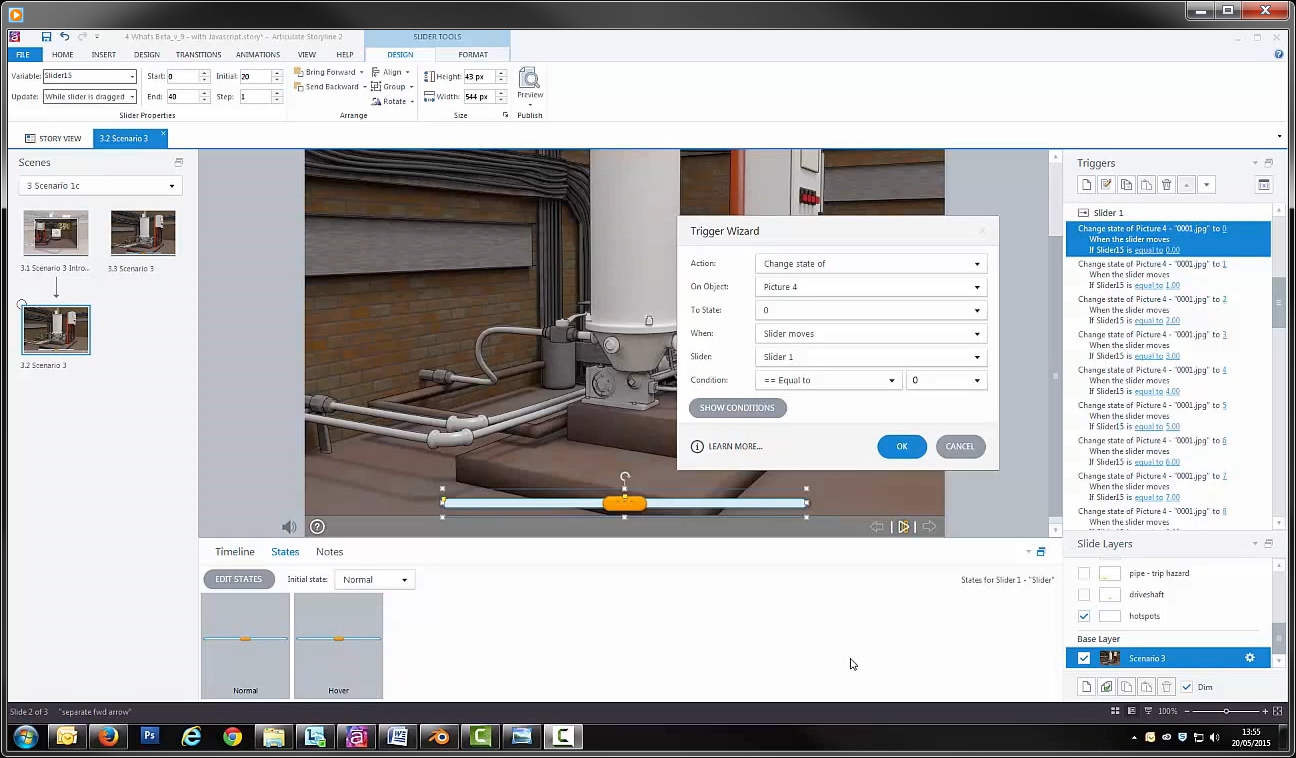 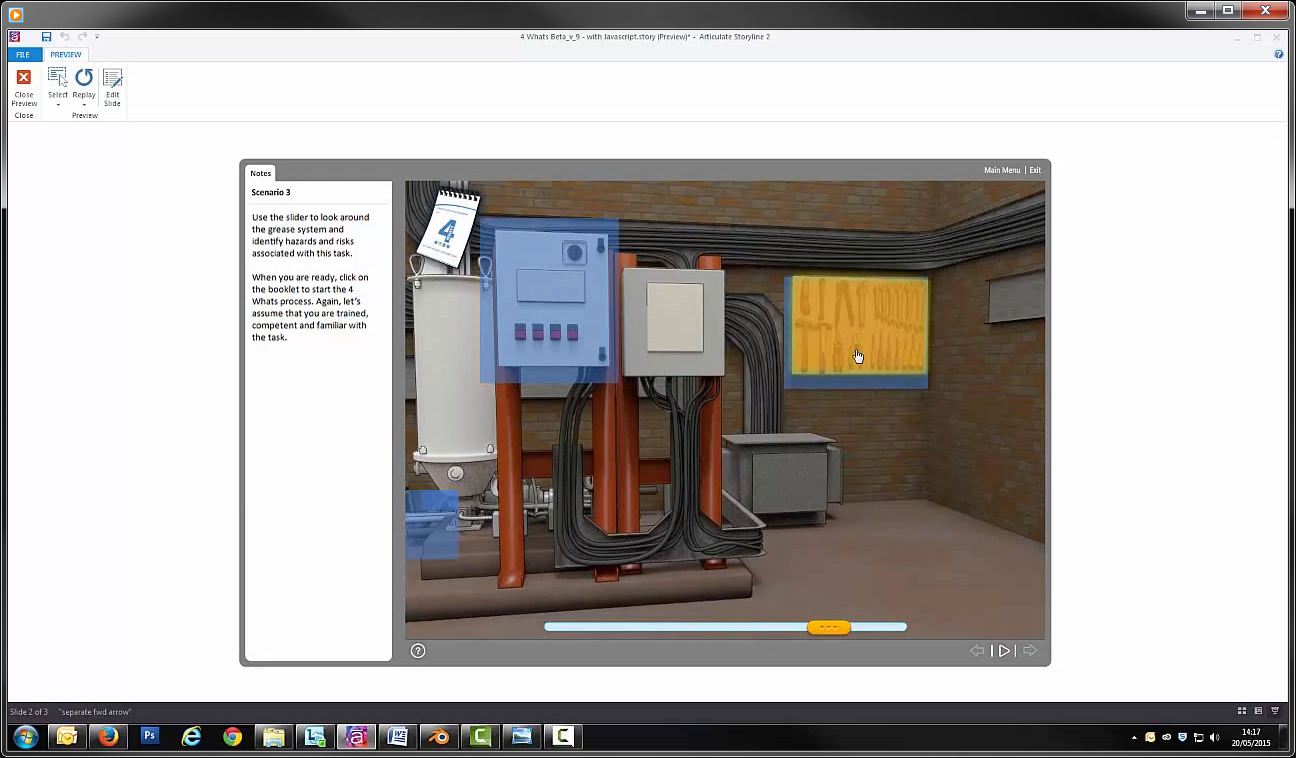 With the main image and matching hover states set up and triggered by the slider, we needed a way to make the hover states appear when the learner moves his or her mouse over the relevant part of the scene. To do this, we created a layer with ‘tracking shapes’, one for each of the clickable objects, which also have a state for every frame in the animation and are controlled by the slider using triggers. For each frame of the animation, the tracking shapes were manually resized and repositioned to be over the top of the appropriate object in the scene.

The tracking shapes themselves are set to be 100% transparent and their layer is set to show when the timeline starts. A trigger on the tracking shape shows the corresponding hover state layer when the learner hovers their mouse over. The result is a hover state for every frame in the animation.

Finally, the hover state images were given triggers to show a feedback layer when they’re clicked.

As you can see, this technique centers on the use of states, which contain or relate to the frames of an animation and are controlled and synced together by one of the built-in slider objects in Storyline 2. Once you’ve got the concept, it’s really just a case of repetition.

If you have any questions, please post them in the comments below! Happy sliding!

How I Built This Recycling Parallax Interaction in Storyline 360

How to Create Interactive Video Quizzes in E-Learning

Everything You Need to Know About States in Storyline 360

Thanks for sharing this amazing example :) Good job!

This is the most amazing slider I've ever seen. The detail, the accessibility of clickable areas. #Gurutastic!

Awesome slider James! Opens up so many possibilities!

Very cool! How long did it take you to do this from start to finish?

amazing. Reminds me of QTVR with interactivity. Thanks for sharing!

Thanks for all the great comments! I hope the "making of" helps explain the process of making this type of interaction in Storyline. Sliders offer so many possibilities for interacting with content!

Awesome job James! I've been really looking forward to this tutorial ever since I saw this slider for the first time, so glad you shared it :) To be honest I was hoping there was an easier way to make this, I wonder how much time did it take you guys to do this? I was also wondering if there is way to produce a flash animation, import it into Storyline and integrate it with the slider so it will control the frame movements, anyone?

First CONGRATULATIONS!!! Thank you so much for you work and sharing with us! As Oren says and your say it in the video, this kind of set up is time consuming! So how much time did it take your to achieve this 3D scene? Thank you, have a nice day!

This is awesome! Thanks for sharing it with us.

Impressive work James! I'm curious about the navigation buttons. How could you change the default Storyline buttons?

Amazing. Thanks for sharing!

Thanks everyone! As Magic says, creating 3D graphics is its own discipline with its own learning curve. Some rendering styles will take longer than others and testing is required to get the look you want. Modelling time will be affected by the level of detail required. There was a certain amount of trial and error producing an interaction like this for the first time, and it is a time consuming process - I'd estimate around 8 days to produce something like this again.

Wow! Very nice work! I'll never be a 3D artist but I am a photographer... this has given me ideas how I might do something similar with photographs. The glow effects would be my challenge. Thanks so much for sharing.

Hi - I love this example. I am trying to recreate it on a smaller scale with a 3D iPhone rotation. I am running into issues with my hover state layers. They are showing inconsistently. Sometimes they appear on hover of the tracking shape and sometimes they don't. Also, if they do appear, once I hover over them once, the do not reappear unless I move the slider off of that animation frame and back on to it again. I have the "restore on mouse leave" option selected on the trigger. I left the tracking shapes a transparent blue so I could be sure they were appearing (and they are). Any thoughts or suggestions? Thank you!

Wow. Great example. I plan on using a similar approach on a Fire Suppression system course I'm developing. Thank you for sharing.

Wow. Great example. I plan on using a similar approach on a Fire Suppression system course I'm developing. Thank you for sharing.

Awesome work James! Thanks very much for creating the how to video, really want to give this a crack now.
Sign In to Comment