Need to record audio internally, not through the microphone

I'm attempting to create a "Record Screen" Replay project but running into issues with audio. I want to record the audio from the source (my Storyline output) and not the external microphone built into my laptop. Is this possible?

I've got something similar. I have an old project with video in it but we don't have any sourcefiles. I'd love to just record the screen and get the audio directly from the output to the speakers, not pick it up via a microphone placed near the speakers... Can we do this?

Maybe I'm misunderstanding, but you might just have to look at it laterally....

If it's a sound (of any sort) that lives on your computer, then there is an audio file for it somewhere. You don't have to "record" anything. Just locate that sound file and bring it into your project.

I'm actually recording a storyline project and want to capture the audio from the video, but not from the microphone built-in to my laptop. I want to record the audio the plays in the video but not pick up that audio playing through my computer speakers. Does that make sense?

If you are trying to grab the audio from a tradtional video file (mov, mp4, wmv, etc)...   Then open that file with a basic video editor and all of them (pretty much) will let you export/publish the sound only into a music file. (Vegas Home Studio, AVS4You video editor or video convertor, etc)

If you are trying to grab the audio from a published e-learning project.... They (Articulate or otherwise) typically capture sound in stand alone sound files (think MP3) and then pull them in when needed during playback.  Just locate that file(s) in the published package and drag them into where you need them.

If you are trying grab sound this is truly "buried" in a Flash file  (ie not linked to, but recorded in a SWF, FLV)... you would use a tool like AVS4You audio editor, MP3Grabber, Audacity, to catpure it out of the Flash and into a conventional sound file format.

In any case, you shouldn't have to record the sound from a microphone/speakers as it already exists as a file somewhere.  If it's already digitized on your computer somehow, don't even consider converting it multiple times (D>A>spl then back from spl >A >D). Instead just keep it in the digital world as outlined above.  Make sense?

Thanks Bob for helping out here!

Tnx for suggesting the software that can capture audio. Still doesn't answer my question. Can I record the output send to the speakers with Replay?

There are a few specialty tools available that help to record stuff from your PC. However, you should be able to do this using a built-in Windows setting. It's a little hidden:

1) Right click the speaker icon in the taskbar and select Recording Devices.

3) A new item (if it wasn't already visible) should appear called Stereo Mix. Right click this and select Enable.

Now make sure you have an audio recording tool installed. Audacity should do the trick.

2) Click the record button in Audacity, then play the file on the PC that you want to record from.

3) Stop the recording when you're done and edit to taste.

4) Export as the audio format of your choice.

Sounds good Steve, I'll play with that. The thing is though that we do not just want audio, we want to record something on the screen that has audio embedded. EG a course for which I don't have a sourcefile but does contain audio and perhaps even some video. Tricky right? I should have thought about it during the beta...

I'm sorry but I'm still not sure what you are asking about...    If you are using a screen capture tool like the one you mentioned, it records the audio along with the video right?  So you would have both.

If you wanted the audio WITHOUT the video, again simply extract it as I mentioned a few posts above; either from the source file(s) or from the newly captured stream (which is now a recorded video file with audio track).

If you want to MIX various audio and video tracks, don't do that in real time. Instead do the screen capture, then go back in with a an editor (audio or video depending on need) and create the mix you want.

The thing is I have courses for which I don't have source files. When I record the screen the audio I can record is not the sound sent to the speaker (internally) but the sound that comes out the speaker and gets picked up by the microphone which results in crappy sound quality.

The source files we're currenly working with are SWFs and DXR files... We've installed audicity but can't get it to record the Stereo Mix setting. Anyone care to do a screencast on that one?

So sorry... think the lightbulb is finally going off for me!  lol

You have an old course that you can play fine (with audio), but you want to make a screen recording of that course with a particular screen recorder tool. Guessing that's Articulate's Replay, not Applian's Replay as the latter certainly records the audio directly.

Ok,  so an Articulate Replay pro might want to step in here, but guessing to Steve's point and mine earlier, it sounds as if you might have to do this in two passes.... one to record the video via Replay, then one to capture the audio (either by extracting from SWF or recording the Stereo Mix via separate program). Once you have both, you could import the audio file back into the Articulate Replay screen recording as it does allow for that.

Hope this helps, and curious to see if an Articulate Replay pro can speak to it's ability to capture sounds directly.

Thank you Bob... I considered myself a Replay pro

I just imagined this would be some kind of Windows setting similar to what Steve describes...

Everyone thank you for your input!

Holy Moly! I just noticed that I've got the STEREO MIX option Steve described as a microphone.... and it works! It records the output to my soundcard! YEAH!!! Same for Articulate Storyline.

Hey Steve, I'm on Windows 7 and don't have that option.

I did this before, my suggestion is that you can use Camtasia Studio 8 to catch the screen including the audio when replay your course content.

In the above process, don't forget set internal recording the sound without through microphone which is the option of the camtasia.

After that, as you publish it, just choose the audio option (mp3).

Before doing that, take a time to read the PDF manual and see its tutorial which can be found on its web site including 30 days trial version.

Generally speaking, Articulate studio for ppt and quiz, Camtasia studio for the screen capture, Audacity for the sound, and Formatfactory for the file format transformation and Moodle for the e-learning platform could be nice combination.

(May be there are other better alternatives.)

Hey Steve, I'm on Windows 7 and don't have that option.

Never mind. For my laptop, the option is listed as Rec. Playback and my driver was outdated so it would not let me select it when using apps like Replay. Now that I've updated my audio drivers, it works like a charm.

Thanks Owen, Terry and Jeff for all the updates here!

I am running Replay on a Mac through Parallels Desktop 9 / Windows 7. Can anyone troubleshoot with me to get the option to record the internal audio? I've tried the suggestions above but can't seem to locate the Stereo Mix or anything "internal" for that matter.

Sorry Lee, I am not familiar with that configuration. I just know that on my Dell laptop running windows 7, it is listed as Rec. Playback 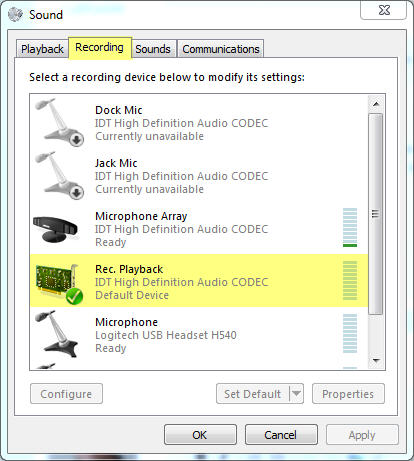 I'll admit right off the bat that I'm not a Mac user, so this may be a silly question;

Are you able to check the sound drivers / microphone drivers on the Windows 7 side of the machine? If those aren't installed or updated, it may not be an option for you or may not be installed properly.

Another option might be to record using a program on your Mac side. Just make sure that you record in a supported audio format.

I also found an article on recording internal sound on a Mac - not sure if it will help, but I thought I'd share:

Howto Capture and Record Audio on Your Mac

**Scroll down to the "Internal Audio" section.

Let us know if you have any luck :)

The new version of Snagit, 11.4, now supports recording video in the manner you need.  It records the sound from the system and also allows you to add a voice over.

Thanks for sharing that, Brent :)

Have a great Friday!

Anyone else think it's strange that people are having to suggest Camtasia and Snagit to record audio for a screen capture when this is a support forum for Articulate Replay? These programs do exactly the same thing as Replay. What the problem looks like is, Replay does not have a user friendly way to record audio directly from the system. You have to go and change settings, update drivers...etc. I don't know about Snagit, but Camtasia has a simple, "Record System Audio" that just works without jumping through hoops. Why doesn't Replay have that?

Not trying to be a complainer, but it just seems like that would have been one of the first things considered during the software planning phase, even before development.

I don't claim to know or understand our team's planning and development process, but Replay is a new tool for us, and only in it's first update. If there are features or elements you'd like to see in future updates or versions, I'd recommend sharing those thoughts with our development team here.

Reading back through this thread, it seems as though Jeff was able to get it working using "STEREO MIX option Steve described as a microphone" so you may want to investigate if that would work for you.