I've seen a few posts about this, but not sure how to resolve an issue.  We are trying to upload a new logo into Logo Panel on the Player.  When we do this, it is always blurry.  We first tried it at the maximum size of the panel, then tried it smaller.  We also used JPEG and PNG files to see if there was a difference.

In every instance, the logo ends up blurry.  Since there are words in the logo, this is a problem.

We also tried locking the player, as was suggested in a different post.  However, that cutoff some of the content on the screen and the rest of the player navigation.  The logo did look crisper, but not helpful when most of the content cannot be seen.

I've attached screenshots of the player with the locked and unlocked options.  The logo in locked version screenshot doesn't look as crisp as it actually shows on the screen.

Does anyone have any other suggestions of how to fix this?

Hi there, Melanie.  I'm happy to try to help you out!

What version of Storyline are you using?

Also, what are the dimensions of your slides?

If you're able to share you .story file here, I'd be happy to test some workaround for you!

I'm attaching the .story file.  It's a test file, so there isn't any content in it.  I'm also attaching two sizes of the logo that we tested.  Both of them had the same blurriness.

I converted the 200x220 image file to a JPG, and that seemed to help. Take a look and the published output here. I can see that the logo in the player is slightly more blurry, but not much. Is that how it looks on your end? 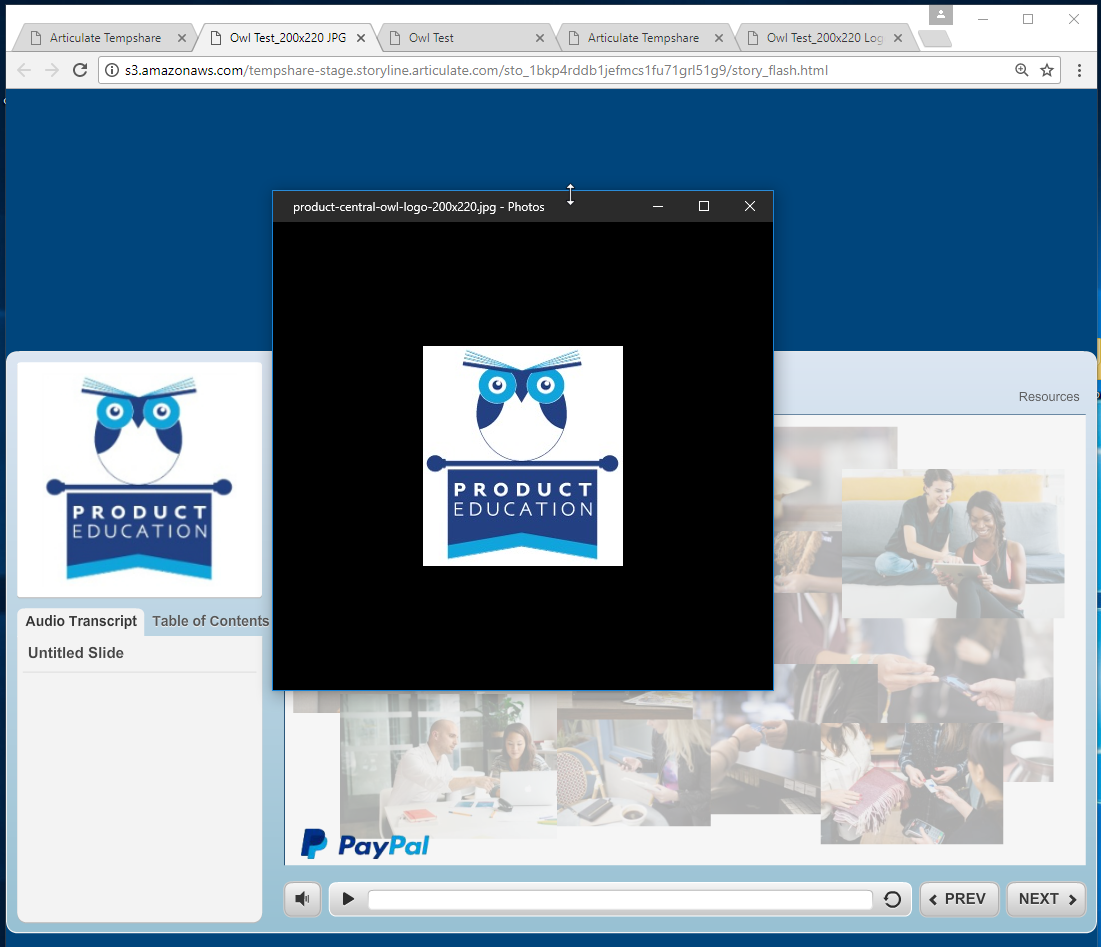 Thanks for trying!  When I opened the published file, it is blurry on my end.  I have tried different browsers and does the same thing.

Hmm, that's strange. Could you share a screenshot of how it looks on your browser, similar to the screenshot I shared above?

Thanks, Melanie! I'd like our Support team to weigh in here, so I'm going to open a case for you. Keep an eye on your inbox--you'll see an email from Support@Articulate.com soon!

One of the things that also helped was making sure that the logo graphic was 220x200 and 72dpi. I was exporting at a higher dpi, and that was causing reduction fuzziness.

Thanks for the suggestion, RIch.  We're living with the slight blurriness for the current modules.  I'll try switching the dpi when we update them in the next few months.  That may have been the only thing we didn't try.  :)