Character doesn't show up according to the variable change

I tried different ways, but all don't work.

1. Initial state of the characters in 2nd slide is hidden, and change the state to normal when user click one of the character by using variable change. (Trigger: attached file - slide 2-1)

2. Show different layers in which there is the character of either female or male when user select one of the characters (variable change). (Trigger: attached file -  slide 2-2)

* The 1st slide's trigger is in attachment: slide 1, and the attached storyline is using the first way.

trigger order is very important. You are jumping to the slide before setting the variable. Change the order as I have in the image below and it should work for you 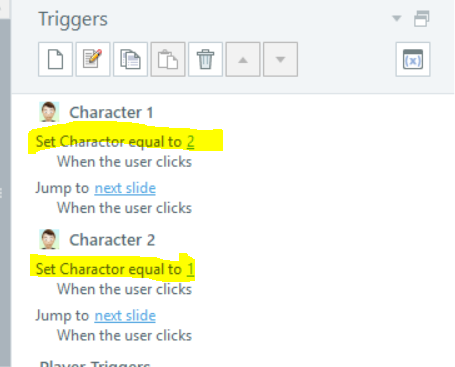 I didn't notice the trigger order before. It works!

Glad you got the help you needed here! Trigger order is one of those things that can easily trip you up, but take a look at some of the rules and behaviors here.