Hidding base layer objects between slides

I have a scene that contains 3 slides.

Each slide has 3 layers that are triggered with buttons on the base layer.

Each base layer has a starting image which is set to change to invisible once any of the layer buttons is clicked.

Each base layer also has a show previous slide button.

Here's the issue - everything works great but when I click show previous slide, the starting image reappears on the base layer behind what ever layer was previously shown on that slide.

Is there a way to keep the base layer image on each slide hidden after the slide has been viewed?

Have you tried setting the slide's properties to: Resume saved state?: 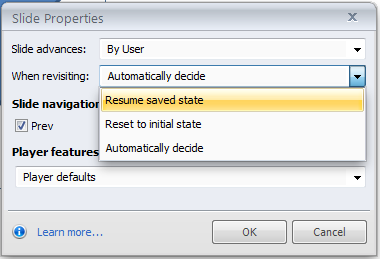 If that's not doing it, mind attaching your story so we can get a better idea of what might be happening? Thanks!