How to Transition In & Out of Layers - Halloween Example!

Today I have an example to share with people just getting into SL2 or those looking to better understand how to effectively use the animation features in SL2. 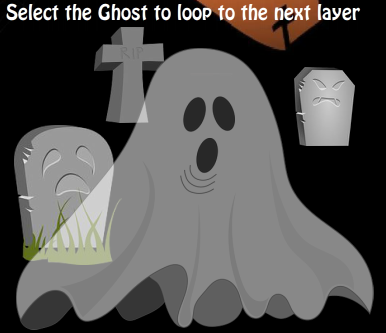 In the attached file I have made a simple looping set of animations. It will demonstrate how to use slide layers and cue points to animate into and out of a slide layer. Using this method you can make all kinds of fun and interesting interactions without too many triggers.

The above image shows all the triggers that are on the base layer. I only added one to show the slide layer named "Ghost". 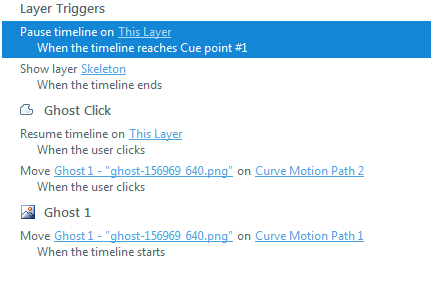 The above image shows all the triggers that are on the "Ghost" layer. I have a cue point at 3.5 seconds in. The first trigger on this layer tells the player to pause at this cue point. When paused, a hotspot button called "Ghost Click" is set to appear. It is positioned between 3 and 4 seconds on the timeline. This button has 2 triggers telling the timeline to resume and telling the object "Ghost 1" (the ghost you saw in the first pic) to move on the 2nd curved path that I drew for it. The last trigger in the image above tells the ghost to move into view when the timeline starts. 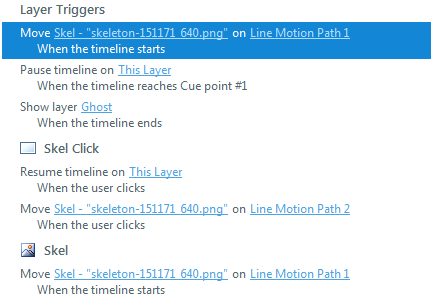 This layer is set up and does almost exactly everything that the ghost layer does, but when finished it links back to the layer "Ghost".

The other thing that each of these layers have are transitions on the ghost and skeleton objects. These do not always work properly with different objects. You will see if you select the skeleton on the "Skeleton" slide layer and look under the "Animations" tab. The image above shows you what the "Animations" tab will display when the skeleton is selected. He should be animating into the scene with this effect applied to him. Unfortunately this does not work (at least not for me). But if you watch the ghost animation he has a working fade in animation selected for his intro to the stage, and that one works (not sure why). And exit animations for both of these caused the objects to just disappear (so I didn't include any). But there will be times when you try these with other objects that they will work fine. 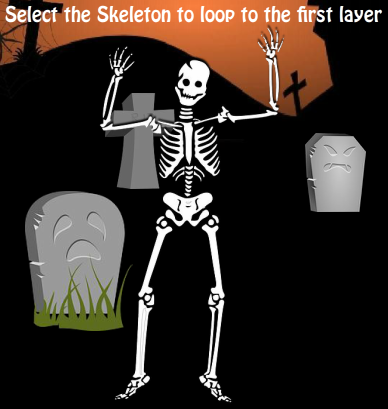 Well I hope some of you find this helpful. Once you understand this concept of pausing in the middle of a slide layer, your imagination can take over and you can start to create some really cool stuff!

Thanks Daniel for the example and plenty of time for folks to play with it before Halloween!

Thanks for sharing Daniel!  Figuring out how to better use animation features in SL2 is currently something I'm interested in learning.

Great work, Daniel! Thanks so much for your contribution. :)

Happy to share! Working on building a Halloween game if Flash CC and SL2. It inspired me to create this.