I'm building a risk matrix that displays a different risk level depending on where you position two sliders (consequence x likelihood). The resulting risk level depends on both factors and I'm trying to create triggers to make that work. I've given each slider a variable and each position a value. If I could create another variable that would add the two slider variables together each time the slider moved then I could create a range of values that would display each risk level. I don't seem to be able to do this because that variable won't work, it won't assign a value of two other variables added together - any ideas?

Screenshots of matrix plus sliders attached. 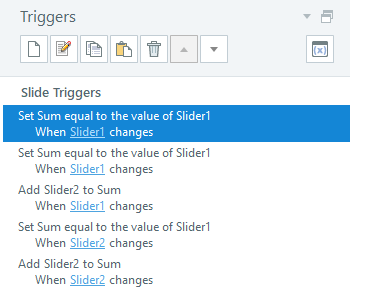 Just noticed I had duplicated the first slide trigger. It doesn't hurt anything, but it doesn't help either, and is unnecessary.

I don't think you need to add the sliders together you can display the range based on the X,Y Values.