I have a slide with a base layer and multiple other layers.

Is there a way to prevent the seekbar from resuming base layer activity, while focus is on another layer ?

Even better, is there a way for the seekbar visible while focus is on another layer to reflect the timeline of that other layer?

I think if you allow seeking on the slide layer properties that may help. This is the info from the tutorial about seekbar on layers 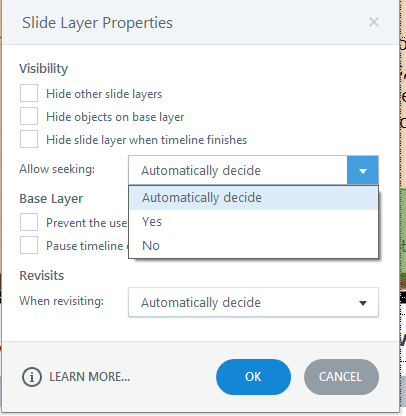 Brilliant, problem solved! I've been struggling with this for a week, couldn't find a reference anywhere!

I love these forums!

Glad you got it sorted Geoff...have a great day!

Glad to hear it Geoff! Thanks for popping in with an update :)