Select one Two Different Audios (male/female) on the same presentation

Is there any way to select one of two audio files, one is a male voice and the other is a female voice, without double the whole presentation and without have to select it on each page?

Without seeing how your file is setup for playing the audio files...

You should be able to add the triggers to the slide master and then apply those layouts. If master slide doesn't work just copy paste the triggers to each slide or create the first slide with triggers then duplicate.

Allright! we will try this way! thank you very much Wendy!

Hi, we haven't been able to make the Voice selection Works, so we have a question:

We have already created the variable "FemaleAudio" True or False with a "Default Value - True" to select between Male and Female Voice, and created the triggers on the Voice selections page:

Then the instruction is that we have to set a Trigger on each slide:

And this should work well if we had only one male or female audio on each slide, but the problem we are confronting is that we don't have only one audio, we have several audios working with buttons Audio On/Off, and each button should trigger Male or Female depending on what we have selected on the Voice Selection Page... So we have créate a Trigger with conditions on each button:

But this is not working it is only playing the Female Audios becuase we have set the ¨FemaleAudio" Variable as True.

So... Is this posible? How can we make this work?
Should we create an other variable for each slide that Works depending on the "FemaleAudio T/F"  and changes the state of each audio file when the user clicks on the buttons?

If you can share your .story file happy to take a look for you - easier to help if we can work with your setup.

Hello again!
And this is the link to the storyfile, it is only a part of the entire course, the full course is to heavy becuase, as you can see in the review file, it has several videos and audio files. https://community.articulate.com/discussions/articulate-storyline/select-one-two-different-audios-male-female-one-the-same-presentation
The main language is German, but you will se 4 scenes, the starting scene where we have the "Continue/New Start Selection" and a "Are you sure? page, then the "Voice Male/Female Selection", where the variables are set up, and the "Main Menu with the chapters where you can see the buttons that lead us to the Excercises and the Videos"
There are three more scenes, one is just an excercise with three levels (Easy, Medium, Dificult), the other one are some videos and an excercises with its levels, and the other one is an A/B selection sequence. On this scenes the variables are set up in some of the audios, and also for the male/female avatars that are two images. Neither of this are working, and I've been trying with different set ups. I don't know what else can I do.

Here it is the review file so you can try and see how it should work https://360.articulate.com/review/content/8517cbff-692f-4b30-b1fc-2cc0fa61593d/review
The instructions  to the one part that should be working with the voice set up are:
-Neustart
-Ja
-Male/Female Voice selection

And then:
-Laden (Chapter2)
-Üung 7
- Weiter Button
- Select one of the options on the rectangle of the multiple choice (this audios should play          automatically when selected, and should play male or female)

Hope I have explained myself in a way you can understand the course and help us because we are running out of time and this issue we can not solve.

Thank you very much!!

I thought the first link in your post above would be to your storyfile but it's to this post.

Can you just strip out one or two of the slides that shows the issue. If you can't post it here you might need to log a support ticket and get Articulate to take a look at it.

Is the each audio on it's own layer or is it all on the base layer?

Sorry! I didn't notice that I didn't copied the shared link well, here it is the storyfile https://drive.google.com/file/d/1ZFmUWxBftOhpiMhR2eF5XkVVwV5KTiB_/view?usp=sharing
Each slide has several audios and avatars that might work with the voice selection.

Hello again!
I'm attaching some screenshots, the first one is the voice selection page, the second one is a screenshot from one of the excercises that have several audio, this is a multiple choice excercise, when we select one of the options should play one audio, male or female depending on the selection; and an avatar male/female that should change as well with the Voice selection.
The last one is a video where the user can select one of two options, this options have an auido that should be male/female voice depending on previous selection.

I'm wondering if you have been able to check our file, we still cannot find a solution for this problema, we have already made some testing with a new file and the selection Works fine, we don't know why in the course it is not working. Could it be a programming issue?

I clicked the link and it requested permission to get the file but I never received another notice to download.

Hi Wendy, I'm Sorry I thought I'va already gave you the permission to get the file :/ now you have it, you can download it.
https://drive.google.com/file/d/1ZFmUWxBftOhpiMhR2eF5XkVVwV5KTiB_/view?usp=sharing

Sorry again! and thank you very much!

Ok I'm in the first scene

Trigger order is very important - you are jumping to next slide before you are setting the variables for the voice selection so the 'choose audio' triggers are never executed - change these and see if things start working as expected.  You will need to check all the slides where you are adjusting the variables to make sure they are uppermost in trigger panel before leaving the slide. 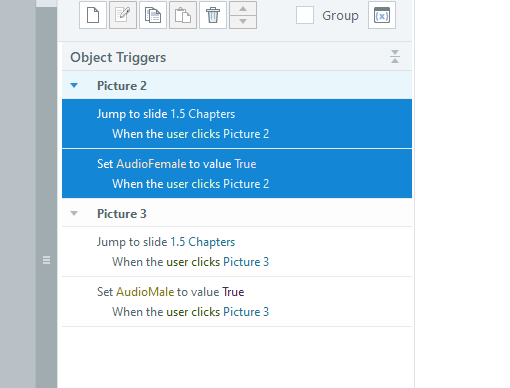 Hi Wendy.
Oh! ok, I'll try this, I will set the triggers for the audios first, and see if ti Works.
I hope this simple change is the right solution.

Thank you very much!

Hello, I'm writing this rely just to let you know taht everything Works fine now! Thank you very much for your help!

I don't know what to feel because it was the dumbest error :/
But finally it is working fine, thank you again!
Best Regards!

Excellent news  - so glad you got it working and all the best with your project.