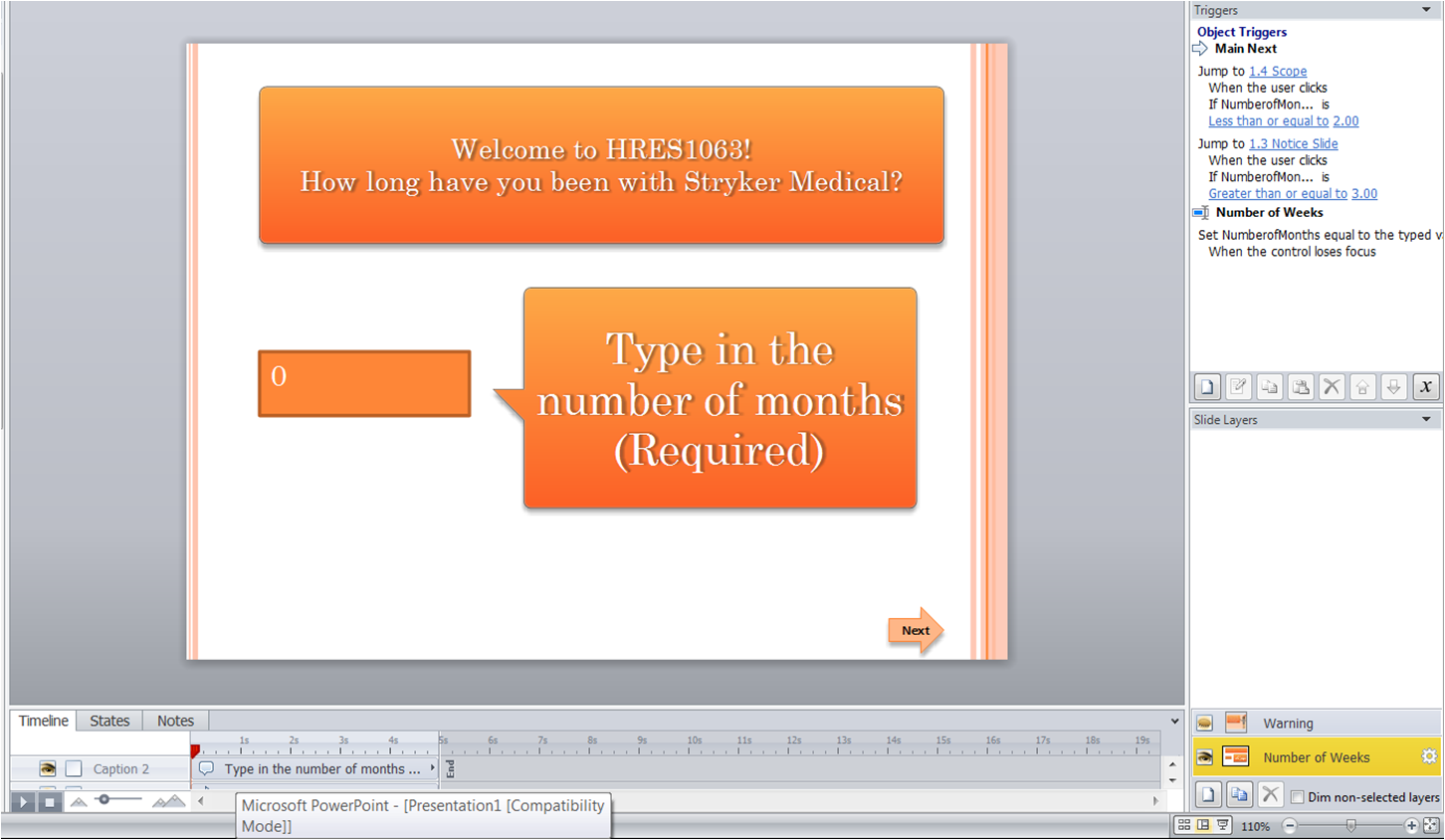 I have tried that as well and it directed me to the beginning of the training not to the warning page when I clicked "Next" button.  In the text variables, there is a setting for the variable when it is equal to blank then to the warning page.  I didn't see that option in the numeric variable setting.

You cannot set it to blank on a numeric variable because the default value is 0.  You need to set it to open a warning layer it must be jumping to a slide insteadcan do you a demo if you want

I realized that there is no setting for a numeric variable to be blank.    The problem I see is that even though I set the variable equal to zero, it doesn't recognize it as zero when a user doens't enter any value.  If you can tell me how I set it to show the warning page, I would greatly appreciate it.  Thanks.

You dont need a warning page just a layer, as I only have one slide I set a layer for the thank you, but this could just as easily be a slide

Thank you for the example.  I mimicked the setting that you had but mine still didn't work.  :-(  Let me repeat the way I set up my variables.

Jump to 1.4 Scope When the user clicks If NumberofMonth is Less than or equal to 2.00

Jump to 1.3 Notice Slide When the user clicks If NumberofMonth is Greater than or equal to 3.00

Show layer Warning When the user clicks If NumberofMonth is eqaul to 0.00

I am not sure what I did wrong that it didn't work for me.

For Phil's solution to work, you need to make sure that the "Warning" trigger is above the "Less than or equal to 2" since Storyline looks at it in order. So just move it on top and keep us posted on the results.

Have a nice day! Annie

Why not change the design entirely?  Give them two buttons to click instead.  One button if they have been with the company 3 months or longer and one button for less.

Annie - thanks for the info.  I moved up my Warning trigger as you suggested but it still didn't show the Warning layer and directed me to the beginning of the training.  I may have to start over again to see if this makes a difference.

Gerry - that will make it too easy, don't you think?

I will redesign it and see what works the best.  Thanks for the tip.

I enjoyed puzzling this out. I think, after seeing Phil's story (thanks, Phil), I'm able to achieve what you were originally looking for WiSeon. Not to say, Gerry, that simplifying isn't the best route. Just that it had me intrigued - so that I had to poke at it a bit more when I should be working!

I've attached the story, and by the way, the hand icon on the warning layer came from Steve Flowers, but I can no longer find where he posted it. Can you let us know, Steve?

Sorry for the long file name. I try to use names (for myself) that indicate what the issue was so that, on days when my brain is mush and I need a solution, I can go back and find it via the file name.

Rebecca - You are a life saver.  You solved the mystery.  I am wondering though, why you had created a triangle and set the status as visited.  I have followed the exact steps you took and it worked but when I skipped the triangle part (step 2), it didn't work.  I am wondering why that is.  Thank you so much for taking the time out of your busy schedule to tackle this and help me out.  Many thanks go to Phil, Annie, and Gerry as well.

Sorry for the delay in getting back here. I was on vaca and it's taking me a while to catch up with everything. This was a bit buried in my messages.

So, I'll try to explain why it works, but I'm not sure how clear my explanation is. If anyone else wants to jump in and simplify or clarify, I'm open!

So there's this trigger: "Change the state of triangle 1 to visited when user clicks Next IF Tenure is greater than 0"

Without the trigger, Storyline doesn't understand that the Learner hasn't entered something in the "Tenure box". Because, as you and Phil discussed, unlike with a Text variable, there's no way to signify that. Hmm. I wonder if that should be a feature request.

Because the problem would be if you actually DID want someone to be able to enter 0, and you still wanted to be sure they entered something, even it if WAS 0. I wonder what that situation might be. Anyone?

In your case, they might actually have worked less than 1 month, but you could always change your parameters to be weeks or days, so there would always be a number greater than 0.

Oh, I guess another way around that would have been to actually create a text variable and instead of having Learners type in numbers they could type in text: one, two, etc. Maybe you can even do that with a text variable. I should check it out!

no, I clearly didn't think that text thing through!