Further to a question from Lauren in one of the other threads, I have put together an example of Slide Master and Layers usage, to get a consistent functionality on a number of slides, for example a Voice Over and Closed Caption ON / OFF buttons.

This is also great, as you only need to make a change in one place and it will reflect throughout your entire project.

Here are  the Example and the .Story file. 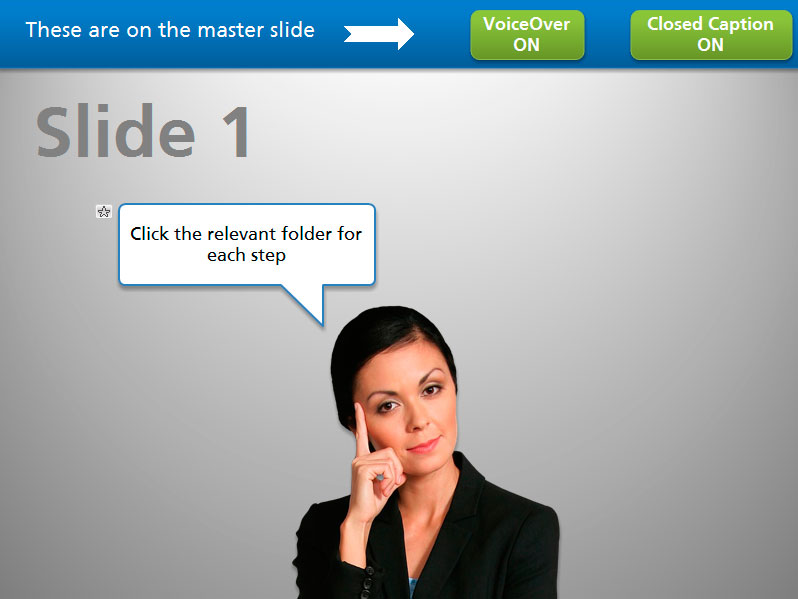 The logic is simple:

On the Slide Master Layer:

2.       Layer Trigger – Sets the initial State (images for ON and OFF) of the buttons based on the current variable values of  sysCC andsysVO to 0 or 1

4.       Button triggers - Toggle trigger that switches the button to ON / OFF State

On the Slide Layer:

1.       Here we have two layers called:  ClosedCaption and VoiceOver.  These contain the audio files and the text respectively.

3.       Object Triggers - The Slide Base Layer contains two special shapes called ScriptBox_Caption and ScriptBox_Sound. These have attached Triggers to them, to trigger the ClosedCaption and VoiceOver Layers respectively depending on the. These are off screen as they have no visual function.

That is it unless I missed something out – sorry I haven’t had much sleep over the last few day…. running on 25% brain capacity at the moment.

Anyway you can have a look at the attached .Story file.

I use this approach to create templates where the VoiceOver and ClosedCaption functionality is then built in, so all I have to do is add the text and relevant audio files to the ClosedCaption and VoiceOver layers.

Any suggestions for improvement and or optimisation are welcome!

Nicely done, Paul! Thanks for sharing :)

This is genius! Thank you Paul! I just need to spend a bit of time wrapping my head around the variables and triggers. Thanks!

Great stuff, this is exactly the kind of solution I was looking for on the forum.

Paul, you posted the example here quite some time ago. The link expired I guess.

Would you mind sharing it again?

I'm not sure that Paul is still subscribed, so you may want to use the "contact me" button on his profile to reach out to him directly.

Thank you for your reply, I will try and contact Paul directly.

Any luck reaching Paul?  This is exactly what I am looking for too.