Timing of animations lost on revisit to a menu slide

I have created a menu page with eight buttons... four on the left and four on the right of the page. These buttons have fly in animations applied to them from the left and the right, but their entrance is staggered by 0.25 secs from top to bottom so the top buttons enter first down to the bottom buttons 0.75 seconds later.

The buttons lead to scenes, the first slide of which I have duplicated all of the buttons and added exit animations (fly out left and right) in the same staggered fashion.

On return to the main menu I have deliberately reset to initial state as I want the buttons to swop in from the sides seamlessly again from top to bottom on either side (I have used variables on each button to set the states to visited on those buttons that have been clicked before when the timeline starts.)

For some reason on retuning to the menu slide the staggered entrance of the buttons on each side is lost.. any button that has been visited flys in at the same time as other visited buttons. Does anyone know how I can fix this?

Hey Matthew, thanks for those details! I made a quick sample file with a similar menu layout, and it looks like the animation replays correctly when you revisit the menu slide. Have a look at the attachment I added down below.

Without seeing your file, it's tough to say what could be causing the problem. Would you mind attaching it to a new thread reply here?

Thanks for replying to my query. I've attached the menu here for you to take a look at. Click the Home Icon to return to the main menu. You will see that when you have clicked on a few of the buttons and returned to the main menu any of the greyed out visited buttons still animate... fly in.. but the staggered timing is lost.

Thanks for allowing me to have a closer look at your file, Matthew! It looks like the menu items are animating in too early because of the "change state" trigger.

Originally, the trigger was set to "Change state of Section01 to Visited when the Timeline starts on slide 1.1." This caused the shape to appear when the timeline started, not matter if it was set up to appear later.

To fix it, you'll want to adjust the object of the trigger. Both objects should match, like they do in the screenshot below: 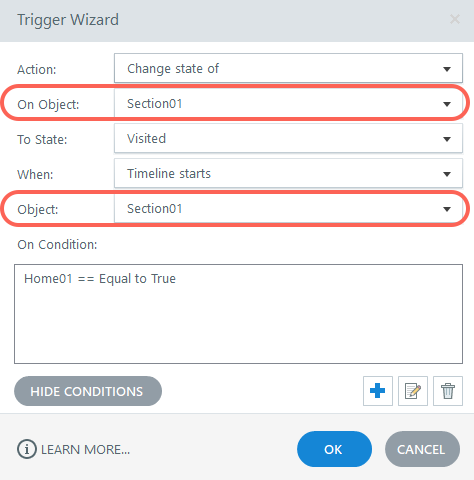 I made that change in your file. Have a look, and let me know if that's what you had in mind!

Thanks so much Alyssa! You've fixed it and no doubt helped me in many future projects too. I was all ready to give up on the idea, but quite liked the fluidity of movement from one scene to another that the effect gave.

Super! I'm happy that it worked for you. All the best on the rest of your project!