Using mouse over hotspots in layers

I have created a slide with multiple layers.  The first layer has two buttons to bring the learner to layer two and three.  On layer three I have two mouse over hotspots but when I place the mouse over the hotspots it brings the learner back to the first layer where the buttons are even though I have one set up to jump to layer four and the other hotspot to jump to layer five.  It seems to work fine if the hotspots are click on but not if they are set as mouse overs.  I have many slides like this and I can't seem to get them to work. If I create the mouse over hotspot on the main layer (layer 1) it works fine.

Any suggestions?  Am I missing something?

I think I see the problem that's happening here. By using a mouse over trigger, any movement off of that object will hide the layer that shows. Have you tried deselecting the option to "Restore on mouse leave"? This may solve the problem for you. 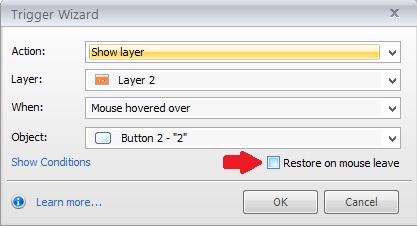 That does indeed resolve the issue.

Is there another way to get around this to keep the restore on mouse leaving?  That is a really nice feature.  As is I created another hotspot which when clicked on will branch the learner back to the original hotspots so that they can continue to hover their mouse over them.  It would be nice if that was not necessary to build into all my slides.

I actually looked at that a little more to see if there were other options. What you could do is either reset the slide to its initial state when revisiting, which may not work, or add a trigger to the hover state. The trigger could set the object to the "Selected" state and then have the layer show when the object is selected. So, the learner will still only be hovering over the object, but the actual object will be in a different state. Then, when you use the hotspot to return to the main layer, you can reset the object. This should allow the hover call to work again if the learner wants to go back to those layers.

Let me know if that works!

Reading through Christine's post it sounds like she is suggesting setting up a new trigger based on when the user hovers over an object (and it's state is changed to the hover state) that would then also change it to a new state (call it selected) and when the object is in the selected state it would show the layer. If you have a sample file you're working on, and could share it here with us, we could get you started by setting up an example in that file to show you how all the triggers would look and the behavior.

Looks good so far. I made one small change in the setup, however.

Currently, your "draft" layer is set to hide the other layers: 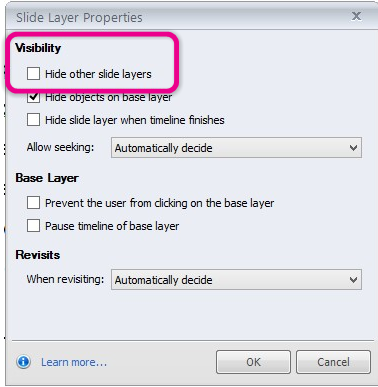 You'll want to disable this.

Now, when you hover over the first word, the draft layer should show. When the user's mouse moves off of the hotspot you have in place, the layer should close - but you should also stay on the previous layer.

I set this up (using hotspots and the same trigger you already used) for each of the item in your list. I duplicated the "draft" layer for each, and just added some placeholder text.

Let me know if this works for you! :)

This may be an old posting, but I just wanted to let you know that I was having the same issue and your suggestion of disabling the "Hide other slide layers" setting fixed my issue as well.

Glad to hear this helped you out Stuart!

I have come across this issue as well. It seems to me that this is something that is operating 'not as expected' and needs to be fixed. I would not expect a layer to close by hovering a mouse over a button especially if the trigger says go to another layer. Unticking the 'Restore on mouse leave' does not imply 'Hide Layer'. Should we be expecting a 'fix' for this?

With your permission, I'd like to take a look at your project file to understand what you are running into as well as the use case. You can share it publicly here, or send it to me privately by uploading it here. I'll delete it when I'm done troubleshooting.

Thanks for sharing your file so that I could take a look, William.