Have been making scenario quiz questions that allow multiple entries per question according to the technique Jeanette discussed (http://www.articulate.com/support/storyline/how-to-evaluate-multiple-fill-in-the-blanks-on-the-same-slide). Rather than recreating each from scratch, I duplicated slides for each new scenario, changing details as needed. Here's where the fun starts: SL1 auto-advances variable names--variable, variable1, variable2, etc.--whenever you duplicate quiz slides that reference them. But it does so inconsistantly; variables referenced from within conditions do NOT so advance, leaving them mismatched. So I had to go into every item that referenced variables and make them match.

Next, I needed the questions to appear randomly. I had quite a bit of trouble building the question banks to let that happen--did a LOT of copying, moving, deleting, etc. of questions. It never dawned on me (until too late) that SL would continue that behavior with the variables in working with question banks. Long-story-short, I ended up with several variables that were duplicated over 40 times; that's over 160 of them! Quiz answers won't evaluate out properly and I can't tell which slide references which variables! It is a NIGHTMARE.

I think this might help you pare down your variables a bit.

If you bring up the list of variables (click on the X in the "Triggers" pane), it'll show you all your variables. On the right, there's a "use count" which shows how many times each variable is used. 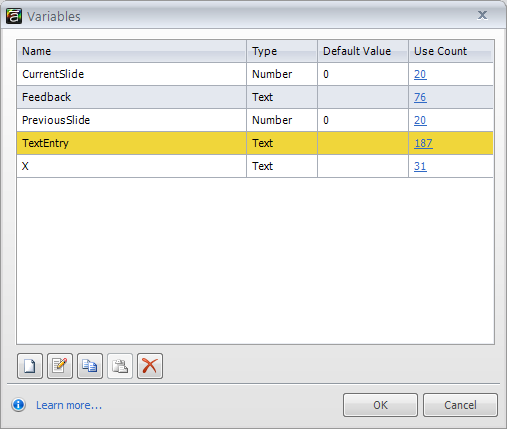 If the "use count" is zero, then that variable is not used and you can safely delete it. From your description, you'll probably have plenty of those.

If you click on the "use count", you'll get a list of all the slides, layers and triggers that reference that variable.