Hi All, I learnt storyboarding on entirely on PowerPoint, and now in my workplace we use Word. So my question is which according to you, is a better tool to storyboard?

I find that my storyboarding is faster on PowerPoint, and I'm able to better add design perspectives and make the graphic developer's job easier. Do share your thoughts around this.

Between Word and PowerPoint, I prefer PowerPoint as it gets me closer to an actual "working proto-type" of what the course will look like.

Having a proto-type makes it easier to validate with key stakeholders that the direction I am taking with the course is the right one.

...actually - I seldom if ever Storyboard, now, I rapid prototype - it seems to be much much faster and more time-effective IMHO.

With some prodding from Bruce, I should clarify my response. Back in the days when I would StoryBoard, I liked PowerPoint for the reasons stated.  Over time, for me, I cut out the story board and went straight to the prototype... and if you are going to prototype, you should do it in the course development tool you are using. For me, that means neither Word nor PowerPoint but StoryLine (which wasn't listed as an option in the question posed.)

Thanks for keeping me on my toes, Bruce.

With some prodding from Bruce, I should clarify my response. Back in the days when I would StoryBoard, I liked PowerPoint for the reasons stated.  Over time, for me, I cut out the story board and went straight to the prototype... and if you are going to prototype, you should do it in the course development tool you are using. For me, that means neither Word nor PowerPoint but StoryLine (which wasn't listed as an option in the question posed.)

Thanks for keeping me on my toes, Bruce.

LOL - I was just trying to see if I had missed some wonderful new option !

Could you expand on "rapid prototype" ?

For formal storyboarding, when I need to present it to several groupls and get approval, I prefer Word, mainly for the ability to easily add comments.

For storyboarding for myself I use a whiteboard, sticky notes, and then do a prototype in Storyline.

My elearning uses for MS Word are limited to 1) publishing the PowerPoint notes - which is the script - for the audio talent. And 2) Writing quiz questions for import into our LMS. If Articulate published to a Google doc I would be done using MS Word.

I've used PowerPoint for years, sometimes exported to Word for stakeholder reviews, but lately have been loving a new product called StoryBoard That. It gives me editable drag-and-drop characters and settings and lets me import into and out of PPT.

If I had to choose, it would be PowerPoint just because you can equate one slide to one HTML page. If I'm using Articulate or any other software (Camtasia Studio/Captivate) it does transistion nicely to the development phase.

I do prefer using Visio. I can build one document to include the course at a glance, and build out specific activities and finally build out the design workflow complete with swimlanes for roles and processes.

Power Point is a very good choice when you need to share the idea'cause you give something similar to the final product. When you are working  alone I do prefer the  prototyping by hand in a paper sheet after that I make an outline directly in Storyline

@Jane...I just took a look at the Storyboard That site. What can you do there that you can't do in PowerPoint or Storyline?

I've found that my storyboarding blurs into development as I go. If this is a forced choice question, then I prefer PowerPoint for the visual. Even then I use(d) the hyperlinks. Still, the danger is my storyboard tool may limit my later development options or, in the least, inaccurately depict the options that would then be available in a less linear Storyline approach.

The less linear the desired product becomes, the more restrictive traditional storyboarding becomes for me.  Storyline transcends the linear choice/progession approach, making the translation from PPT to Storyline more trouble than it's worth. By that I mean to concur with others that I'm better off skipping the PPT Storyboard and jumping into the Storyline prototype.

How does a branching storyboard not get lost in Word? I'm sincerely curious.

( @Jane...Great to see another state government elearning coordinator here in the community. I think you're going to like it here. )

If I had to pick between Word and PowerPoint I’d pick PowerPoint. It’s easy to add graphics and you can create hyperlinks to branch to non-sequential slides, so in effect you can create a working example. But now, I just storyboard in Storyline. Like PowerPoint, it’s easy to add graphics and branching and you can quickly create a prototype. But Storyline has an advantage over PowerPoint because the Story View actually displays the non-sequential branching. I still use PowerPoint, but mostly to gather and edit graphics.

Think about a 3D printer, and a company making bicycles.

They want to redesign the handlebars. Instead of having endless meetings to get the handlebar design correct, they know they want the ends to look a little different. So they get the designer to change the CAD model a little, and they print new handlebars.

Then they sit around a table poke, prod, and draw on the new model, which then goes back for rework on the 3D printer.

After 3-4 rounds of this, they have gone round a spiral and have their new design.

That is rapid prototyping, (from the world of 3D printers).

Same with Storyline - rather than endlessly writing and planning and talking, I usually have one meeting, then build. Often, the first meeting will be held in a room with a big screen, and we open up SL and build there and then in front of them. You need confidence to do it, (and some "performance" abilities help!), but it is a HUGELY liberating experience for me and customers alike.

Then I take it all back to the office, refine, and send with the Word output, and we go round the spiral again. I seldom ever use any other method nowadays unless the content already exists in some form or other.

Just seems a waste of time to me to duplicate in Word and/or PowerPoint - seems to me that in many cases these (for me) are completely unnecessary safety nets, and are used because people expect them to be used. I pretty much have everything I need in SL. Perhaps I might document things in Word after the event, but even that can be done in SL using extra "off-stage" explanation slides.

This was an excellent topic to stumble on, as I'm really trying to figure out my "process." At first I was trying to storyboard in Word (using some of the templates available in the downloads section of this site). However, because I don't have a developer I'm sending my content to, it seems faster to jump right into development rather than spend a bunch of time writing out where I want things to go. I did do some VERY basic storyboarding in PPT, just because I like having the reference of where I want the content to go and branch. Now I'm going to jump right into Storyline and start creating stuff. I'm looking forward to providing the SMEs with a prototype at our next review stage instead of a storyboard.

I have been using Power Point exclusively for the last year or so because it seems to reduce the number of changes I get from clients during the alpha review for media. They feel more comfortable seeing a close approximation of what they're going to get.

But if I'm dealing with a client who is absolutely clueless, I prefer to jump straight to the development, rather than coddle them through the storyboarding process first.

If I were doing my OWN development I would never do a storyboard because it would seem like double work. Even when my developer is using Storyline, I still do the power point to make her life easier.

One of the first reasons I got on this community was to find a decent storyboard template in Word, and I gave up.

@Bruce - It makes perfect sense. I do believe I will move to rapid prototyping in SL for the next course.

The original question was about whether PowerPoint or Word is better for storyboards. My preference is definitely PowerPoint. It is SO much easier to lay out the design, text, graphics, etc. in PowerPoint.

In terms of storyboarding itself, the decision to rapid prototype or use traditional storyboarding might be dependent on content/subject. If you are building a course where there are significant consequences for the learner to get things wrong back on the job (e.g., safety, hazmat, OSHA-related topics or other topics with legal consequences), a traditional course development process including storyboards might be necessary, no matter which tool you use to develop your content. In case your course ever became the subject of or evidence in litigation, you better be prepared with a very well-documented course development process, including storyboards and a record of any changes made to the finished content. I would not feel comfortable creating a course in a manner that Bruce and others have described where this might be a possibility. Nothing wrong with rapid prototyping at all. It is definitely the way to go given the tools we have available and the speed at which we need to develop content sometimes. But, you need to think about the content and decide whether you may be held accountable legally for it if something goes wrong. Keeping good records through a traditional development process will go a long ways to preventing yourself, your colleagues and company out of trouble. I've seen situations where lawyers came looking for storyboards for a potential court case (it was for an OSHA case). Sure they could see that the course content was accurate, but they also needed proof of a solid course development process in place, and they asked us to provide them with every version of the course that had been in production during the time that the person had been employed at the company.

If in doubt, always consult your company's legal team for advice.

Go with what feels right for the project you're working on. Sometimes I'm using word, powerpoint, or SL, it all depends on the project time lines, etc.

I prefer PowerPoint. One major advantage is the slideshow. Word is good but PPT is easier.

I use PowerPoint inside of Excel so that I can tie behaviors and characteristics to storyboard objects.

Like many of you, I've been mashing together a few different tools and techniques to create a storyboard that would work for e-learning.  I had a hard time finding not only an appropriate storyboard, but also project plans and quality assurance testing for my e-leaning courses.

I finally created my own and am sharing it with all of you. Follow this link and download a storyboard created specifically for e-learning!

I get so many terrific ideas from the E-Learning Heroes blogs, newsletters, and community.  I'm grateful to all of you for your contributions!

Here's a look at what you can try out by clicking on this hyperlink: www.elearningstoreboards.com/articulate48

Power Point and Word do work.. or you could try "Storyboard that" 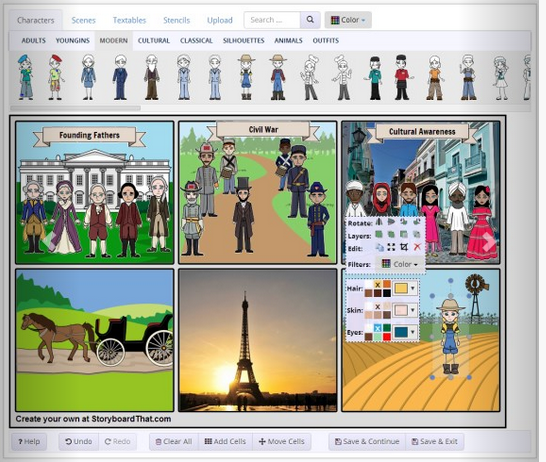 I enjoy using powerpoint to storyboard for several reasons.