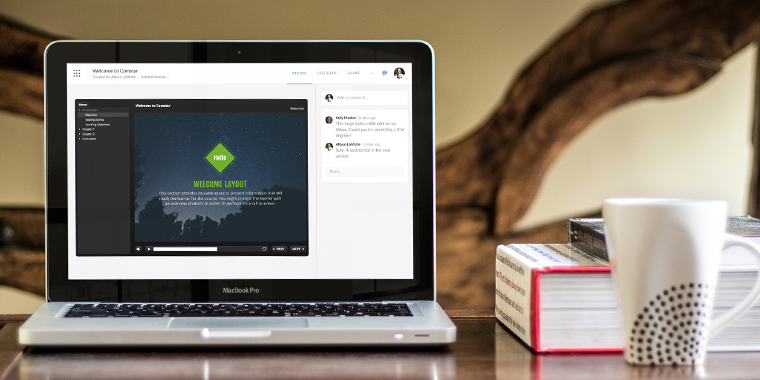 Getting feedback on your course is a key part of course development. But ask most course developers to name the point in their projects where progress tends to stall and you’ll probably hear loud and clear: it’s getting input and sign-off from stakeholders. That process is often tedious, slow, and painful. It seems that no matter how hard you work to set expectations and communicate your design plan, going from concept to reality inevitably results in a few surprises—sometimes involving delays, miscommunication, frustration, and rework.

As a longtime e-learning geek, finding robust and yet easy-to-use review tools has been an obsession of mine. I’ve searched far and wide for tools that help make collecting and organizing review feedback easier for me and my stakeholders. But I’ve always run into the same obstacles:

That’s why Review 360, one of the awesome apps in Articulate 360, is poised to be a great big gift to course developers. If you haven't seen Review 360 yet, check out this video by Articulate CTO Arlyn Asch to see why it's so useful.

Below are the three key ways I see Review 360 overcoming these obstacles.

An ideal review tool accelerates course development, rather than bogging it down with onerous administrative tasks. Unfortunately, most of the e-learning review tools I’ve tried just aren’t very easy to use for the developer or their stakeholders. They make developers go to a separate website to upload and manage their published output. They also require separate logins or app downloads for stakeholders. And when it comes time to review the course, many review tools simply provide a space for feedback without putting the feedback into any meaningful context (more on that in a moment!).

All of these problems effectively put the brakes on course development, taxing developers with the added work of administering the app, supporting their stakeholders, and deciphering feedback.

By contrast, Review 360 gives course developers a powerful, simple, and fast tool for gathering feedback. You simply publish your course to Articulate 360, then send the link to your stakeholders. When they click on the link, Review 360 launches right in your stakeholders’ web browsers. That means there’s no special software to download or plug-ins to install. The Review 360 interface is so intuitive, you won’t even have to help your stakeholders figure out how to use it! And because it’s so easy, they actually will use it. You’ll finally have an effective way to get feedback from your stakeholders and accelerate course development.

Review 360 frees you from playing peacemaker (woo-hoo!) by giving your stakeholders a single view of everyone’s feedback. That way, Stakeholder A and Stakeholder B can duke it out without you. Take a look at how Review 360 makes it easy for commenters to have a conversation: 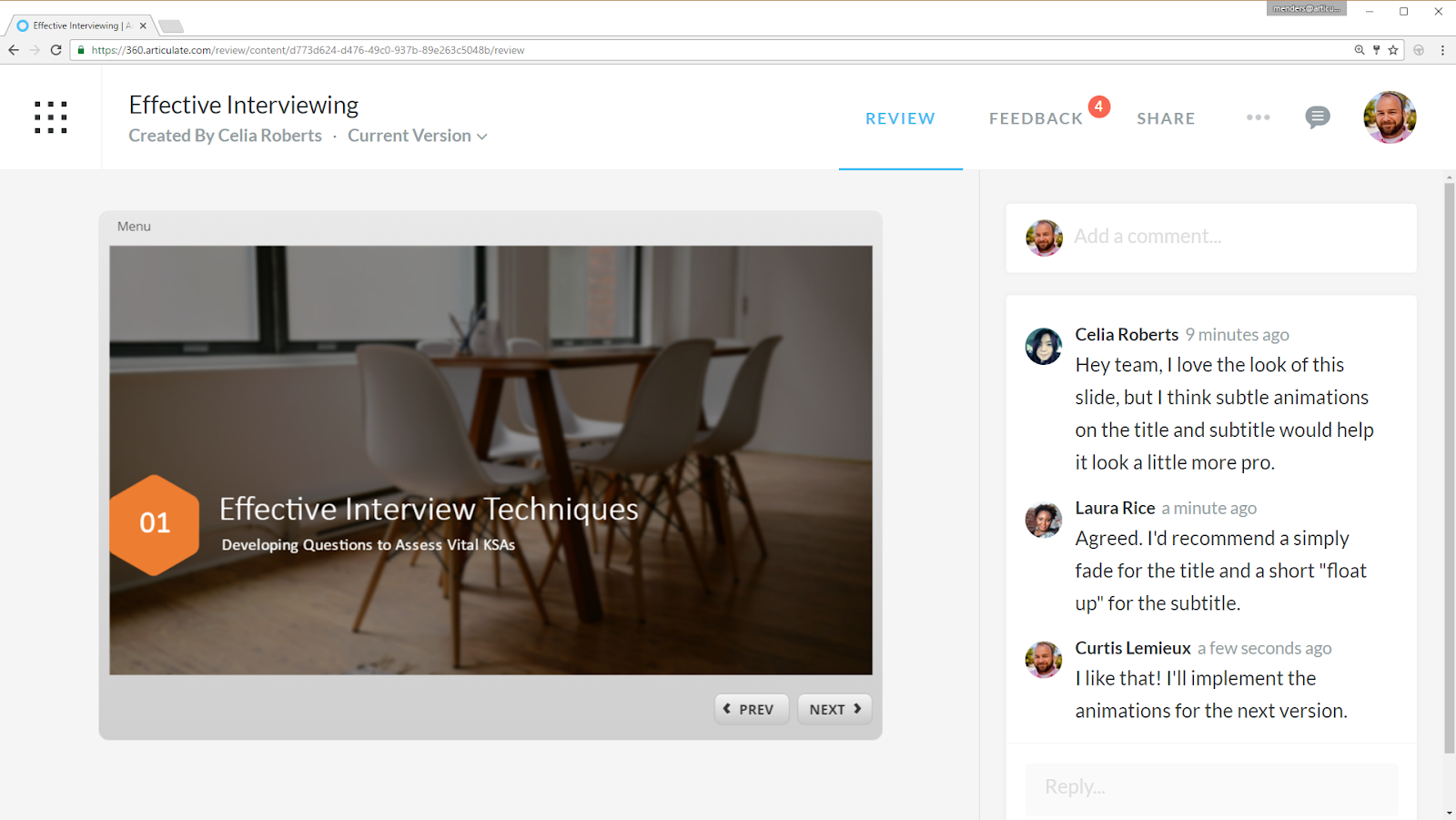 When all your stakeholders have more visibility into the comments of other stakeholders, conflicts can be spotted and resolved before they hit your to-do list.

Gift #3: It Puts Comments Into Context

Animation, video, audio, quizzes—all of these pieces of interactive e-learning make capturing and communicating changes to courses more challenging for stakeholders. To put comments into context, they typically must use separate tools for grabbing screenshots and noting their comments. And as a course developer, you must trust them to clearly describe what part of the interactive content needs work.

On top of that, you’re totally reliant on stakeholders to make detailed notes not only of what, when, where, and how they want their changes, but also to accurately cross-reference all of those change notes with all of those screenshots. That level of detail is a lot to ask of busy stakeholders!

The third gift of Review 360 is that you can avoid all of the misunderstandings and endless back-and-forths that inevitably accompany spreadsheets and screenshots. That’s because with Review 360, stakeholder comments are captured in-context—right next to the slide that they’re commenting on. In fact, Review 360 takes a screenshot of what the reviewer is seeing at the exact time they make a comment. You know exactly what they’re commenting on because there’s a picture right there with it! 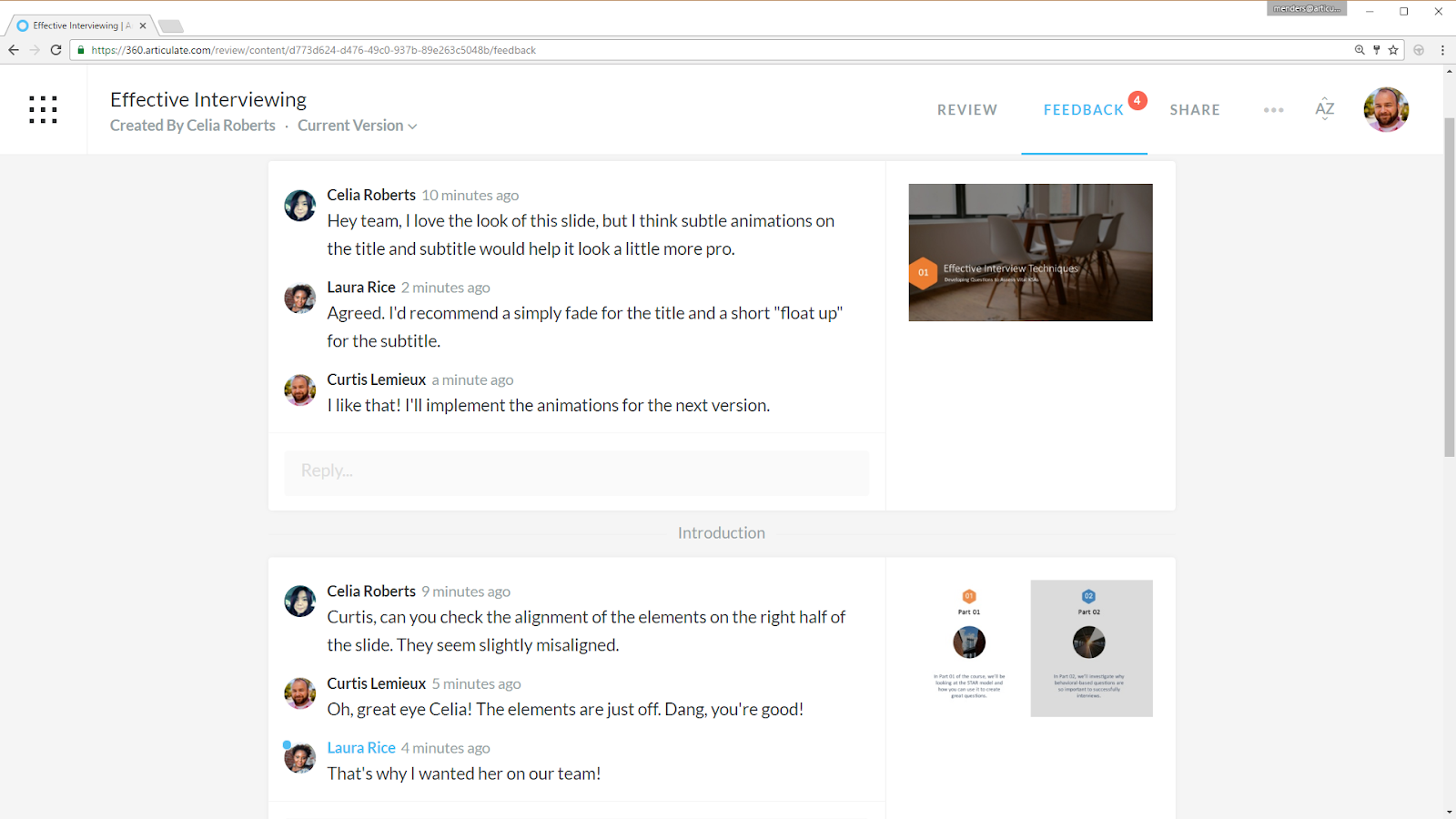 With Review 360, you know exactly what needs to be tweaked on every slide of your course, without having to decipher cryptic notes and screenshots.

Are You Ready to Explore Review 360?

Whether you’re ready to explore all of Review 360’s gifts or you’re just looking for tips and resources for making your review process more efficient, be sure to check out these other handy (and free!) resources:

How will Review 360 make your life easier? Share your ideas with us by leaving us a comment below.

This looks like a great addition to the Articulate suite. Am I right in assuming you cannot use Review to review courses developed in Rise? It's not mentioned and I can't find a way to access Rise courses from Review. If that's the case, any plans to include that capability? I really like Rise (have developed most of a first tutorial for a class I'm teaching this semester in about 6 hours - amazing), but you guys have spoiled me and now I really want Review to work with it! Thanks.

Hi Daniel. Glad you're feeling spoiled. :-) You're correct in that you currently cannot review Rise courses in Review, however we are working on a review feature for Rise. My best advice is to stay tuned for updates!

Hi Lisa. Sorry to hear you've had some trouble using Review on your iPhone 7. I checked with our dev team and we don't have any known issues documented but we can take a closer look. Could you share a link to the course you're trying to review here? And can you tell me which web browser you were working with on your phone? It would also be helpful to know which iOS version you're running on your phone.

Hi Trina, I am running ios 10.1.1 and using safari. Is there a direct email that I can use to send the link to you?

Hi Lisa. Thanks for the iOS & web browser info. Our dev team doesn't have any reported issues with Reviewing courses on mobile Safari or with the iOS version you shared with me. They've suggested it might be more productive for you to open a support ticket here: https://articulate.com/support/contact/ Then you can share your course(s) with them privately and work through the issue.

I'm currently using Review and love it. It needs a few extra gems. Like being able to promote or mark a comment as important so it shows at the top. And some simple reactions would be nice. So folks can just give some easy input without creating a long thread. Very similar to Slack.

Thanks for the feedback, John. Love your suggestions! I'll definitely share them with our dev team.

How many projects can Review handle concurrent? we've a customer where we make over 40 projects at the same time... thx for reply!

Hi Oliver. There is no limit on the number of courses you can have in Review so you and your customer should be good to go. Good luck with that project. It sounds huge!

Hi Trina is there a way to see an audit trail of all review comments posted? So if we update to the comments and then a reviewer 'changes their mind' we have a log of their initial comment?

Is there a way to send reminders to stakeholders (and team members) after we send the link to review initially? And/or add a due date for them to complete review? We have Articulate Teams and REALLY need a way to collaborate easily with each other using the Review feature.

Hi Jill. I can't say if this specific feature is something our team is looking at, but I can see how it would really ease collaboration. Would you mind sharing this as a feature request, directly with our dev team? https://articulate.com/support/contact/feature-request I think it would be a great enhancement to Articulate Review—especially for Teams customers. Thanks chiming in!