I am new to articulate, I am facing a problem in drag and drop template.

Objective - Reset draggable object to its position, if dragged to wrong drop target.

I want the correct and incorrect dialog box to appear after each object is dropped to some drop target, after which the position of the draggable object set to its original position from where it has been dragged, If drop target is wrong.

I want the dialog box to appear upon dropping on each drop target, the if that drop target is wrong, the position of that object alone should be reset to the place where it is dragged from.

I am using Articulate Storyline2, thanks in advance

have you looked at the settings in the D & D options 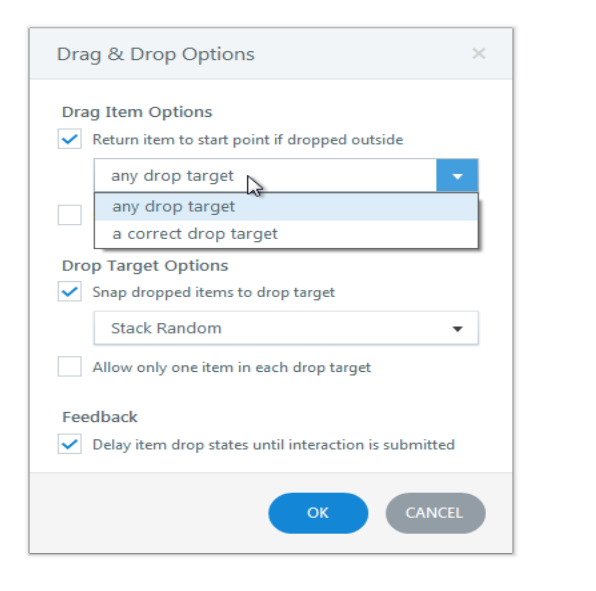 Yes ,i have tried in both options... removing the triggers for the
objects placed on stage to show the correct and incorrect feedback...it
works(position resetting of drag and drop)...but if triggers are there it doesn't...adding trigger doesn't allow the drag and drop option of resetting position not to work...

Yes, if you're customizing the drag and drop feedback through additional triggers it'll override the snap back functionality.

Thanks a lot.So, Is there a way to achieve both the things? I need feedback for each dropped item and when it's wrong, it should go back to its original position.Like getting the x,y position when it's dragged and assign them manually(which resets the position of object), when it's wrong. such things possible in Articulate...or any other way to achieve my task described above.

There isn't a way to do this with the built in functionality, so I'll defer to the community in case they've come up with a creative solution to accomplish this.

Thanks a lot Ashley...