Drag and drop interaction problem with snapping on non-question slide

I am trying to create a graded question, which features a drag&drop interaction. The user has to place an object (a pin) on an image. Two areas are correct, so there are 2 possible, correct drop targets, which are hotspots. When it's dropped outside of one of those 2 hotspots, it's wrong.

There is no default option in Storyline for this scenario, so I have solved this by creating a True/False question. I hid the true/false options under a white shape so it's not visible. Then I and added some triggers:

The problem I have, is that the drag item keeps snapping to the middle of the picture. How to I prevent it from snapping to the centre? I want the pin to land wherever I release it. I want to avoid having to create two dozen 'fake' target area's.

Anyone have any idea how to solve my snapping problem? Thanks so much in advance :)

If you open the form view of your drag & drop question, you can open the Drag & Drop options from the top ribbon. 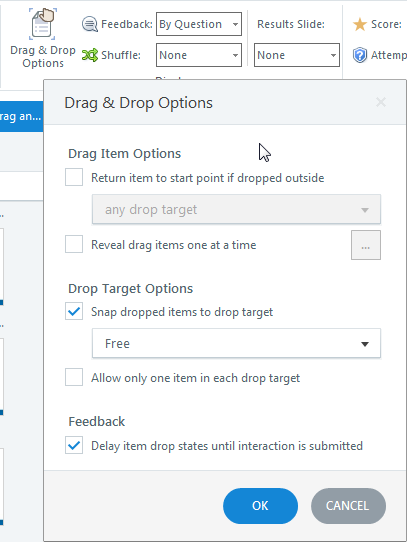 For example set the snap dropped items to free.

When the object only has hover-over-triggers, it doesn't snap to the centre.

Glad you were able to figure out a method that worked for you!