Each group is composed by a text box, a png image and a storyline shape.
The groups have 3 states: Normal (colour blue), Drop correct (colour green), Drop Incorrect (colour red).

I've also tried to:
- create custom state
- create 3 invisible additional targets, one for each of the drag group
- create a system of variables to track which answer has been moved last, by combining the interactions of the groups on the real target and the additional target
- I've added in the Correct\Incorrect layers a group of triggers that track these variables and force the custom state change

So far so good, BUT it all goes bonkers when any of the WrongGroups is dropped outside the real target or the additional target. I think the problem is that there is not a way to tell storyline to do something "when a drag group is dropped outside any drop target".

Perhaps have a think about if this actually needs to be as involved as you are trying to make it. What if you get rid of your first statement The drag groups have to return to start point if dropped outside any drop target, does that help?

I suggest uploading a copy of the file for someone to have a look at, as descriptions of what you are trying to do can also make it sound confusing - like trying to describe how to tie a shoelace.

What if you create a drop zone the size of your slide and make it an incorrect drop zone?

Hi Michael, I've added the .story file as you suggested, hope that helps.

We've been thinking about changing the interaction, but before taking that road we are trying to understand if it's something doable or not.

We've tried to do that. What happens is that the drag object goes back to the center of that slide-sized drop zone. But we need it to go back to its original place.

But we need it to go back to its original place.

Andrea, have you tried setting this option in the Drag & Drop Options? It *should* bounce the item back to it's starting point. 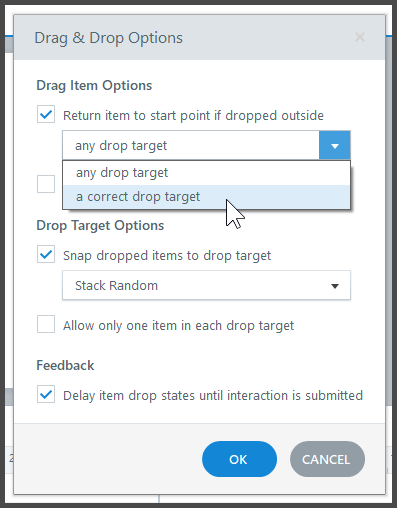 The problem is that Storyline cannot understand that if a shape\group leaves the target zone then it's not a valid answer. Storyline records that the answer has been placed on the correct target but doesn't record that is has left the same target.

The only way would be if the user dragged it back to the starting point, but that's not what we are looking for.

Just un update: we gave up as it couldn't be done.

I was curious and was trying this even when you gave up on this. However, I see the file that is attached works perfectly. Maybe during these 2 years, the Storyline update did the wonder! :P