help! limiting test to one attempt

I have a course that needs to be limited to one test attempt. I have made a rough outline of the course (attached) with no content so I can test it in my LMS. I feel like I'm so close...but maybe not!

I have looked at this tutorial  http://community.articulate.com/tutorials/products/limiting-quiz-attempts.aspx but it doesn't help with the problem I'm having because I'm not using the Retry Quiz button. That doesn't make sense when the user only gets one attempt.

I know it would be easier to limit the access in our LMS, but they said they are not able to do that.

I made a second scene in the course that is essentially just a message to let the user know they have already accessed the course one time. I thought I could put a trigger on the Results slide to +1 to the variable (that I named Count). Then I set a condition on the first slide that said if Count=1, the course should jump to the second scene that would tell them they have no attempts left. It SEEMS like it should work, but it's not. I'm sure I'm just missing something simple.

Since you're still working with an outline for the course, are you able to post it here so we can see what you have so far? You can attach your .STORY file by using the paperclip icon in your response. Keep in mind, though, if the file is too large it may not post.

Oops! I meant to attach it to the first post. Sorry...

Whew, Jill.. that one had me scratching my head for a while!

However, I think I've made a little breakthrough. I (finally) checked the player settings after playing around with many other things and noticed the course was set to "Never" resume. This means that it's been resetting. Maybe this is the villain!

I published the modified version here - and while it doesn't go to the slide you specified for the variable, it does go to the saved results slide and doesn't allow the user to retry the quiz.

I'm also attaching the modified file, just in case you want to take a look

Hopefully this'll get you closer to your goal!

Thanks, Christine! I just made the changes, but our LMS is having some issues right now, so I can't test it out. I'll let you know once I can get back to this.

I am so frustrated with this course! I think it's going to drive me crazy! I'm not sure if what I'm trying to do is even possible in Storyline. I seem to forget sometimes that yes, even Storyline does have some limitations!

Your file does work, but only if the user goes through the entire test. If he leaves the test before completing it, he can get back in and continue on. This would be fine because it doesn't start the test over EXCEPT that I forgot one fact. This test also has a 2-hour time limit. When the user goes back into the test, it picks up where he left off with the questions, but the timer starts back at 0. So I need to make a course that only allows the user to have one attempt at the course and also limit it to 2 hours.

I had some more ideas about trying to diable the Begin Test button on the last slide before the user goes to the course. I can't seem to make that function work. Do you think I'm on the right track, or am I trying to do the impossible? 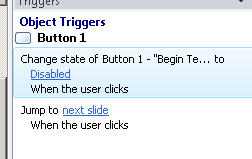 I thought the above trigger would change the button to the disabled state, and if the user goes back into the course he wouldn't be able to even get to the test. But that didn't seem to work as I thought it would. When I go back in to continue the test, the button is not in the disabled state. I set the slide property to the resume to the saved state too, thinking that would make a difference. 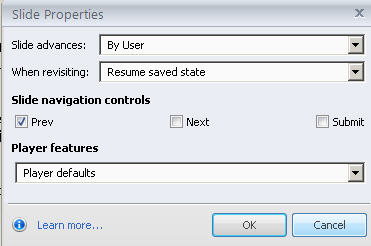 Those are all of the ideas I have for today. I've been playing with this for hours. And I'm sure there's someone out there who could have figured this out in 5 minutes if it is possible. I'm still pretty new to course design. I'll chalk this up to a great learning experience!

Oh no, I had hoped everything had worked out for you! So sorry for all the frustration.

I think I may have found a solution for you. I tried to do the same thing you showed above, but it wasn't working out for me, either.

Here's what I'm thinking - how about a layer? I've tried this out and it seems to work pretty well. Take a look. Keep in mind the "Exit" button will only work if this is launched from a new window. If you're in a tab, just refresh the page (to mimic a user trying to access the course again) and you should still see the "Oops!". This also disables the objects on the slide, including the "Begin Test" button.

Now, obviously, what I added isn't fancy, but I thought the functionality would be great for your course. Also, I want to mention that you don't even have to show the pop-up from that extra layer. If you wanted to, you could show a blank layer, but keep the items on the main layer disabled when they're shown. The user won't be able to click on the button to try the test again.

I'm attaching the file here as well, if you want to see the triggers I used.

Hopefully this gets you a little bit closer to that finish line!

Please let me know if this helps.

I don't see the file though. Can I take a look at that?

Whoops! Sorry about that Jill. Looks like I forgot to attach it.

It just makes me feel better that I'm alone. I do that all the time!

Unfortunately, this still doesn't work as I need it to. If a user would go all the way through the test and not exit before he completed, this would work. The problem is, that's exactly what will happen. This test has to be timed (2 hours), and the user cannot see any of the questions twice. So for example, this test has 125 questions and a 2-hour time limit. If they leave the test after 50 questions, they are still allowed to re-enter the courses. It does pick up where I leave off so I'll only see that last 75 questions. But the timer starts back at 2 hours. The 125 questions must be done in the 2 hours. The way it is now, the user would be able to start that 2-hour timer over as many times as he wanted.

I'm thinking IF this can even work, the trigger needs to be attached to the Begin Test button on slide 1.4 instead of the Results page. I have no problem not even allowing them to leave the test at all once they begin. The program this course is currently built in is set up that way. There would be a statement on slide 1.4 that tells them once they click the Begin Test button they will not be allowed to leave the course.

I'll keep working. I keep getting new ideas but what SEEMS like it will work in theory doesn't always work in my favor.

Let me know if you think of anything else. I'll keep you updated on my progress. I'm juggling a lot right now, so it might not be immediately.

It just makes me feel better that I'm alone. I do that all the time!

***That I'm NOT alone. I'm not making any sense today!

Just wondering if you have figured it out? we have the same issue.

It sounds like Jill had a very customized set up, so you may want to message her directly using the "contact me" feature on her profile to see if she's able to share what was eventually set up as this thread is a bit older.