Help with 'pick one' subdue/toggle

The example attached shows 5 boxes that will change through a series of 5 slides. This is the first screen of the series and the box that is correct is marked 'Product 1'. All the other choices are called 'Incorrect 1', 2 etc.

Users might chose any of the five boxes at random.

In my first sample screen, I have it set so that they all change at once as a layer trigger on the Try Again layer, but this doesn't work as described above. Can a variable control this behavior?

On the second sample screen, I made triggers on the the 'Try Again' button on the Try Again layer, but I can't get the boxes to toggle correctly. Only the 'Incorrect 1' box works correctly.

The "Incorrect" layer should preserve the wrong answers, unless the user makes the right choice on their second try. If they do, the one incorrect choice they made should go back to its initial state.

If anyone can help me figure this out, I would be grateful once more!

Check out the adjustments I made to the Slide 1.2: Try Again layer. I changed the conditions of those triggers to, "if the Incorrect Box state is equal to Selected." 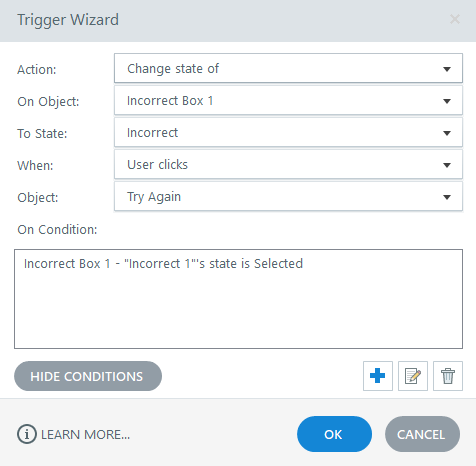 Let me know if that is what you had in mind!

Thanks Wendy. Simple solution as usual!