We recently encounter some issues that some of the layers which are supposed to be in the front, but while browsing in Chrome, they were overlapped with the lower layer(s). Same build looks fine in Firefox or Edge.

I have create a new Storyline project and only copy the problematic slide to the project, my observation is all text is show properly except to bullet 5. 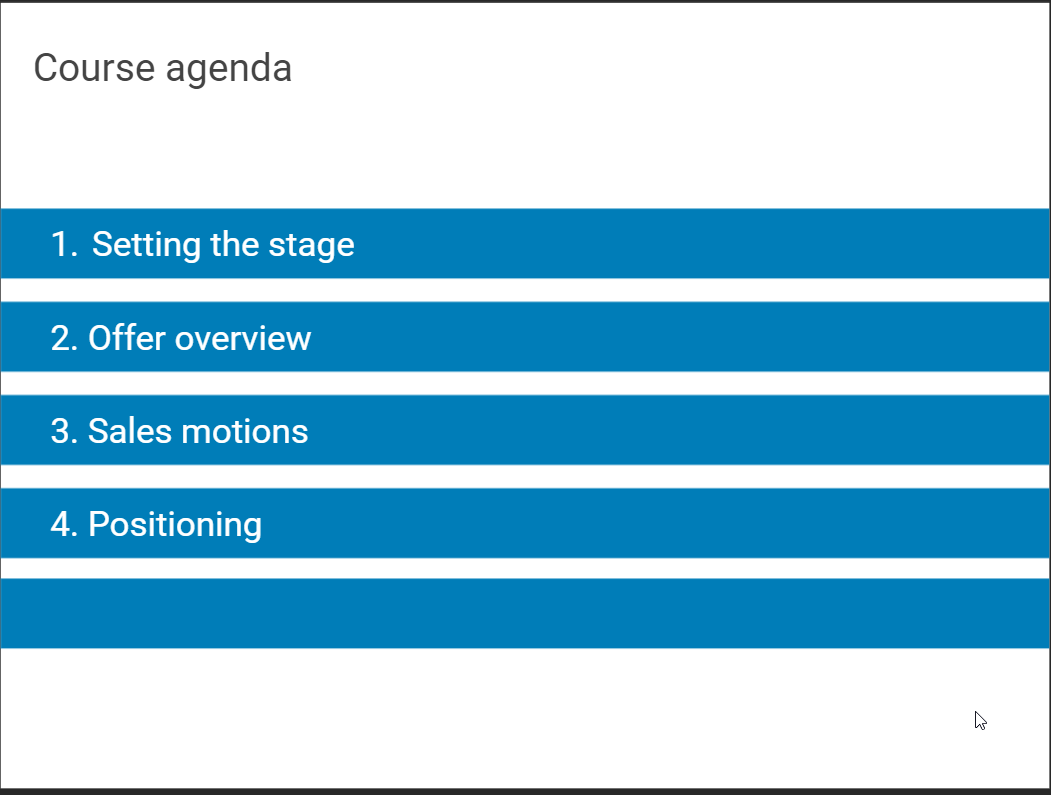 I have attached both Storyline project and the published build. I wonder if anyone have encountered similar issues and know how to resolve this.

Thanks for sharing your project file and allowing us to take a look.

I published your course and uploaded to SCORM Cloud to test in Chrome and it worked as expected for me with Chrome 72 on both Mac and Windows 10.

Take a look at my file here and let me know if it works well for you.

On second thought Arith, if you are rescaling your browser, you will see an issue and I'm seeing one in your file as well. Our team is looking into this issue and we will update you as soon as we can.

We have been experiencing the same problem on computers which are running V72 of Chrome. Computers which haven't updated from V71 are fine, as are other browsers. The only work-around we have identified is to remove fade animation from all the elements on the slide, although obviously this affects the look of the build significantly.

Thanks for sharing what you are running into as well, Samantha (and welcome to E-Learning Heroes).

This fits the description of what we have reported as well and our team is working on this.

I'm attaching this conversation to the report so that we can update you here when we can.

Storyline 360, build 3.25.18009.0 is available today, and it fixes the issue you'd run into where some objects disappeared when viewing courses in Google Chrome 72.

You will need to download and install the latest updates to republish your project and take advantage of the fix.

This is great news!  Yesterday I began to notice this same issue on some year-old projects hosted on our LMS, which have suddenly stopped working properly.  Pleased to read that a remedy has been identified so quickly.  Thanks.

Thanks for flagging this Arith.  I thought I was going mad!

There  is a major bug in storyline 360. In case of multiple layering with audio, whenever i open and close the Lightbox, the audio of base layer and sub-layer starts playing thus creating hindrance. Please find the attached source file and the published version (February 26, 2019 (Build 3.25.18088.0).

Thanks for sharing this sample file with me! I'm not seeing any lightboxes in this file, so I'm not sure how to recreate the issue you're seeing.

Would you be able to record a Peek to demonstrate the behavior? Thanks!

Thank you for the Peek screen recording, Manish. Now I see the lightbox on the Help player tab.

I published your course and hosted the output on Tempshare. When I viewed it in Chrome 72, I did not hear audio overlapping when opening and closing the lightbox.

Could you test this link and let me know how it behaves on your side?