I've developed a mobile sample (intro+quiz) to try it on an android tablet.

They said to me "1024 x 600" and -although the device is smaller than that- the aspect ratio looks the same.

I did one test first, but it was bigger than the space the screen gave me, be cause of the menu and the whole player, so I did some math and I ended up resizing the stage so it could fit on the screen properly.

However, it happens again: the stage does not fit on the screen.

I have uploaded the project, so you may help me out. Thanks in advance.

Also... the video is visually cut off at the left, so I can't see the whole picture.

I don't have an Android tablet, so I published your file and tried it on my Androind phone (Galaxy SII). See screen below. My phone's screen size is smaller than your project's dimensions, but I would have expected that it is scaled down to fit my screen; it didn't.

Maybe this is related to the currently very limited support for Android? Did ypou test on an actual device? 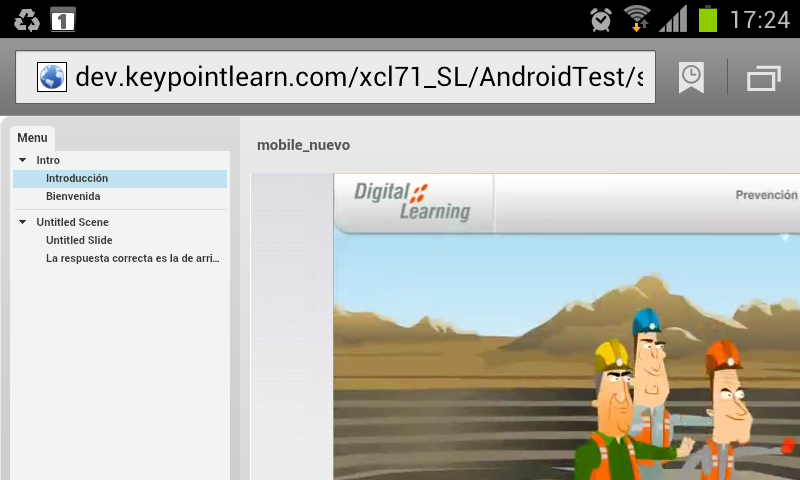 It just occured to me, since you want to run this on an Android device, you should be able to use the Flash version, rather than the HTML5 version.

I ran it on an android device. I was told just now that, Android only supports MP4 and.... "ogv", I think. Anyway, I tryed those formats, the result is the same. For a breif second, -before the video starts- you can actually see the yop-left corner of the video, which you can not see after the video starts.

I have just tryed exporting on Web and I check all the three checkboxes:

I am using Android be cause we got here an Android to do tests; however, our customers will sure use some other devices such as iPad and we are looking for an authoring tool that allow us to export a single project in whatever it is the format we need. I tought Articulate was the one. Flash is not an option for this one, unfortunately.

You mentioned that the project should scale to fit on the screen it's being viewed. That would be great, but it is not happening.

One more thing you can try: In the Player Properties, select "Scale Player to fill browser window" from the Player size dropdown.