I have an object that enters the slide several seconds after the timeline has began. The object is to move along a motion path after a few seconds. However, when the object initially enters the slide, it actually appears in the motion path's end position and then quickly switches to where it is suppose to begin. Any fixes for this?

Might be a lot of causes. If you could attach your .story file, or at least that slide, it would make it easier to try to find the problem. 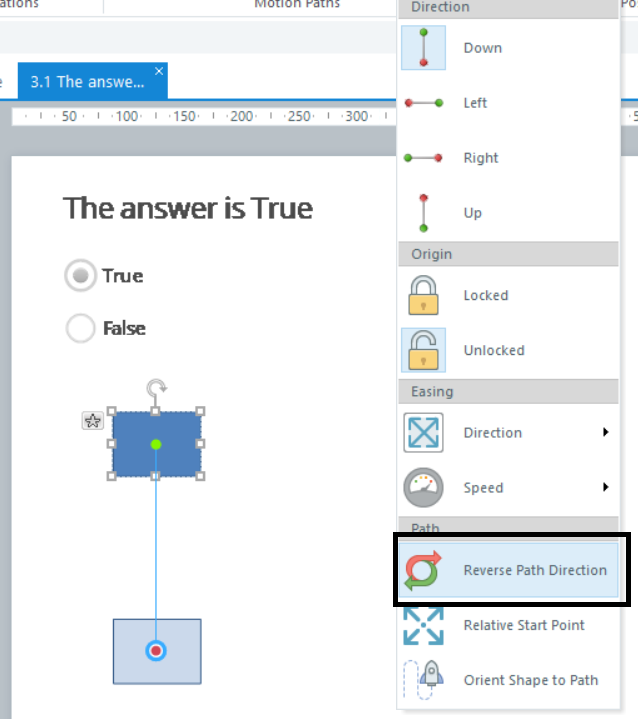 No the motion path is correct, there is something else going on here.

Here it is. When you preview the slide, the cloud enters incorrectly and then quickly corrects itself.

see if the attached works how you want.

I removed the entrance animation and moved the cloud to the beginning of the timeline and changed it's initial state to hidden. Then set a trigger to change state when timeline reaches cue point 3.

Here is another option. I don't suspect that my way will work better than Wendy's, but it may help explain what went wrong in the first place.

Motion paths travel from the green dot to the red dot. Since that was the wrong direction, the motion path was reversed, as it shows in the picture.
Then, the cloud was set to show at about 23.25 seconds, which it does, then at about 24 seconds moves to the end point to reverse it's path to the start point. 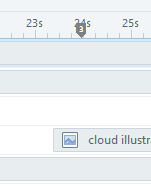 which is why Wendy set the cloud to be hidden initially, so that jump isn't visible. Definitely the shortest solution, but it doesn't allow for the cloud to be visible before it starts moving. The way to do that is to reverse the motion path. I did it two ways, and caught a video to illustrate them both. Since SL360 gives us control over the beginning and end of motion points of a motion path down to the pixel (thank you Articulate, for listening to us) it would be a shame not to use it, and I did on the first sample slide. By selecting first the cloud, then the end of the motion path, I changed their X value which changed their position on the slide. The only negative to this method is that it takes some math. Because the motion path coordinates are set to the center of the shape, and the shape coordinates are set to the upper left corner of the shape container, you can't just switch the numbers and be done. You can observe the differences in the values in the video. And notice how lightning fast I am at doing the math in my head :).

The second slide I moved things by a much more intuitive method, I dragged them, and since I had already used my trusty paper and pencil to do the math, I knew what coordinates I needed to drag to. The drawback of this method is that it is much harder to get perfect control. I should have dragged to 585, but because of the snap and grid settings, I couldn't.

I was able to figure this out. Thank you both SO SO SO much for your help! Life savings as usual! :)