PB with next button

When I was collecting I noticed that at the end of the chronology, the NEXT screen appeared (WITHOUT the learner clicking on the "next" button).

I only encounter this problem with screens where the NEXT button is hidden at the beginning of the chronology and only appears after the learner clicks on it.

Thank you for your help,

There are a lot of reasons why this might happen. If you will attach your .story file here, someone may be able to identify what the exact problem is.

The slides are set to Advance automatically. In slide properties, set them to advance by user. 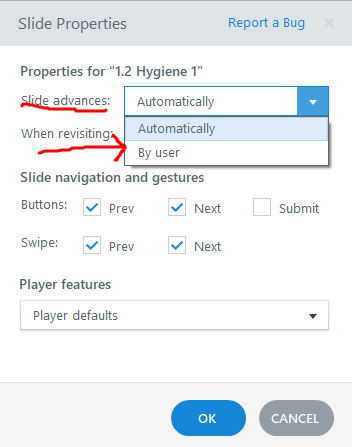 I also wonder about this trigger:

If you want to restart the slide, and replay the audio and animations, this is fine. If all you want is to return to the base slide, use "Hide this layer when user clicks Chevron 1."

Thank you very much for your help