I don't see a place in the player or publish settings to include the presenter panel in SL? Is it possible?

Hi Tracy, there is no built in space for a presenter panel in SL, but the beauty of SL is that you can create your own "panel" and place it anywhere you want.

One suggestion is to change the default size of the player to make it wider and then place your presenter info in that extra space.

Thanks, Nancy! Do you know how to go about doing that? I don't see a place to change the default size of the player.

It is a little bit hidden - click the Design tab at the top and then the Story Size icon. 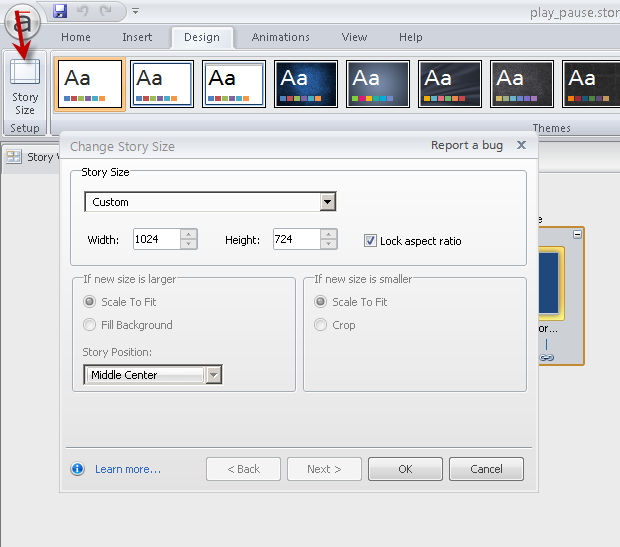 FYI ...I ended up combining our logo with our presenter's photo and credentials and inserting it via the player. This worked great and was easy!

I will look into customizing the player for future endeavors.

Great Tracy - that is a really nice solution if you want the same presenter information to display on every page. The other option I was suggesting gives you a little more flexibility if you want to hide the presenter on certain screens or have different presenters in different parts of the course.

I have a question here.. Is it possible to embed videos in the user-defined presenter panel?

Hi Mukulika. If you create your own user-defined presenter panel, you can embed video, images, audio, buttons - whatever you want really.

I also was interested on embed videos under the logo in the presenter panel. Although I haven`t investigated how it could be do.

Sorry Luis there is no presenter panel in Storyline - there is a logo panel which Tracy has suggested using to add an image containing presenter information. You can put an image in the logo panel but can't add a video.

You can create your own custom presenter panel and in this you could add a video.

There are a couple of different ways to create a presenter panel:

One way would be to use a lightbox.

Aaah! I just understand how to use the lightbox to embed a videospeaker... I think it's better to make wider the slide and drop all the contents on it.

Thank Nancy and Bruce. You two are a greats articulate gurus!

Thanks for this, Bruce

This is great to see.

My own hope a somewhat specific purpose.  I hoped to use this to present a session from a conference, for which we have video. The person in the video would be going through their own powerpoint slides which were being shown on a screen in front of the event audience (the usual boring conference session!)

This is looking for a way of capturing that experience with a storyline module.

I would like to have the video of the person appear in a video player, more or less "ongoing" ... not appearing to be divided up into chunks... and the video would appear in a "separate little block" off to the side of the larger player window which would have the person's PPT content.  Then, at appropriate moments in the video when the person speaking switched to their next slide and started discussing the new slide, the slide shown in the larger Storyline player window would switch too.

Now I see that the way you are suggesting that we do this is to make the Storyline Player window wider, place the video into that left part of it, and then create the illusion that the left side of the player window is actually a different "zone," probably by using background colors and so forth. That would indeed work pretty well.

I can only imagine two downsides to that method.  Neither is fatal, but interesting to talk about unless I am missing something.

(1) it would not be possible to have that video appear, for instance, ABOVE the left-hand slide navigation, as if it was really a disctinct box in the interface.    No big deal, that might be a bit odd anyway.

(2) there will indeed be short "skips" in my overall conference video that forms the audio backbone of this module. Because, if I am right, I will chop my long video into however many chunks as there are slides in the presentation, and insert each chunk of video separately onto each slide.   Again, those short "skips" in the overall video is not a horrible problem, and will in fact have the benefit of allowing the user to click PREV and NEXT to go back and forth in the presentation.   But, I just wanted to make sure -- am I correct about that chop-it-up method?  Is there any other method for that "ongoing" video?

I see a downside to creating your own panel rather than using the Sidebar/Menu portion of the Player Panel.  Without the Menu, the user has no ability to do a Search.  Unless someone knows a way around that??

Instead of putting chunks on separate slides, put each PPT image on a separate layer of one slide, using triggers to move from layer to layer at the proper times. And be sure to tick off the layer property, "Hide other slide layers" so your video continues to show through.

If there are a lot of slides, you could put several layers on each of several slides and find convenient places to move between slides where pauses might not be as noticeable. This would bring chunking back into the process but less of it.

You could just stack each PPT slide as an image on top of the previous on a single slide and layer and adjust timing to the video via the timeline.

The downsides: may not work well if you've a big batch of PPT slides and you're restricted to the scrubber to move to and fro in the presentation.

I had the exact same issue as Eric and this is why I love this forum! All I have to do is a little searching and I find an answer to my question! I also found out I was on the right track with how I thought I should do this, but this showed me how to make the trigger work.

@ Bruce.  How did you create the presenter panel and had the video come up in a lightbox.  I downloaded your file and tried to figure out how you did ti but I am baffled....I have a big idea on how I can use this method.  Many thanks for sharing.

Originally I looked at this and though "I have absolutely no idea...!".

The trick is to create an extra Tab in the menu area via the "Player" menu, and then linking it to the extra slide.

See attached image which has lots of arrows and may (or may not...) make any sense at all 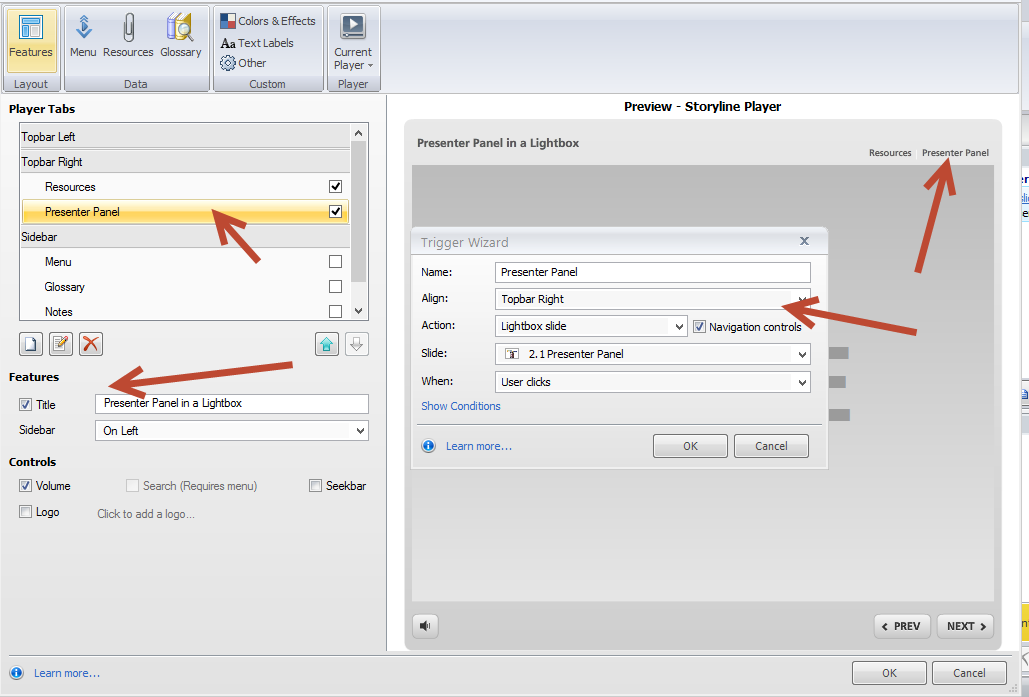 Excellent followed your direction and great stuff I have created a presenter's panel in lightbox...

Can anyone tell me how to do this? http://www.nspoh-on-line.nl/e-learning_vluchtelingen0/

This is what we all want I think?

That is found in the instructions that Bruce shared above about adding an additional tab and then linking to the slide.

I think we do not have the same picture in mind for the solution?

If you click in the SL-example http://www.nspoh-on-line.nl/e-learning_vluchtelingen0/ and go into the menu to "introductie" en then "de mensen waar het om gaat" then you see in the left SL-panel above the SL-menu the presenter speaking.

I have uploaded a picture with a red square where the presenter is with a little video.

Tip: You can insert a SWF movie in the logo panel, which displays in the sidebar. However, a video logo will appear on every slide in your course.

This is not a set-up I'm familiar with and I apologize for overlooking.

I've tried it right away and that's working (with .swf files)! Cool!

No worries, I was not really clear also with pointing to where to look.

Thank you for supporting!