Is it possible to set up an animation or change of state in Storyline that cycles over and over again? I want to have an eye-catching effect (possibly a glow around an object) that pulsates or changes its appearance very 1 or 2 seconds continuously. Is there a way to achieve this?

Take a look at the attached file -> repeatanimations.story

I did a quick mock-up of what's possible. It just involves having multiple copies coming in on the timeline at different times.

Let me know if that will work.

Another idea...Jeanette created a couple stories a while back on this thread. Her 2nd (albertov2.story) example is kind of cool and uses a different approach. She provides instructions also on how she achieved this.

So, just to throw another idea out there!

Thanks very much for the sample file. This gives me some good ideas.

However, I'm trying to find a way to create an animation that does not end, just keeps cycling. I'm thinking now that I might set up one slide that contains an animation, then goes to slide 2, which has the same animation, and that slide goes back to slide 1, etc. I'm going to play with this idea.

I think Jeanette's example gives me exactly what I need. Thanks very much.

It is a clever solution. Glad it's working for you.

For repeating animations in Storyline 2 you can setup repeating animation using triggers and state changes. I made a simple two stage animation of a ticking clock, which runs independently of the time line and interactions you perform. It does not run on layer change or lightbox slides,

I will attach an example here in a bit, where you can see the animation of a wall clock with a moving pendulum and a tick tock sound, run by triggers only

I have a clock picture with a state Normal  -pendulum left and a state Tock - pendulum right.

Yes, animations can be repeated based on some condition, e.g. a media file completing. Here is just  another example of a repeated animation.

Simple add one trigger as shown in attached image.

Here in my example i am taking one arrow with line motion path animation effect.

It's give continuous animation effect till timeline ends. 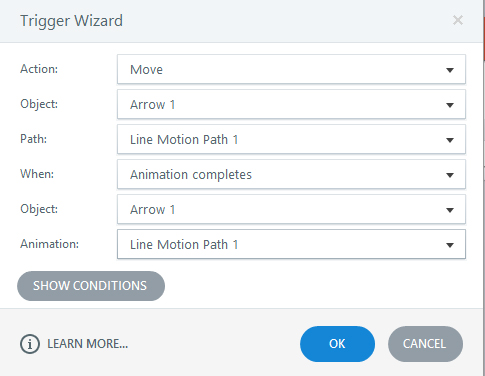 Hi, Pratik -- thank so much for your suggestion here! It looks like Orson's last involvement with this thread was some time ago and he may no longer be subscribed, please feel free to reach out to him directly using the 'Contact Me' link on his profile page if you would like to ensure that he receives your response. :)

Perfect! This worked exactly as I wanted and was so easy.

Thanks for popping in to share that this solution worked for you as well David. It's great when these older threads are still assisting users.

Hi, I realize this is several years old, but I'd like to see Jeanette's solution. This link isn't valid anymore. Do you have a copy of the .story file, an updated link, or just general instructions?

Rebecca doesn't make it back to the forums since her retirement, but a quick search led me to this response which looks to have the file referenced :)

Hope that helps you out!

A different way to loop images or states is to combine them with objects and their motion paths.
Using this, you can switch between 2 or more states or images without using layers.

See it in this example:
http://s3.amazonaws.com/tempshare-stage.storyline.articulate.com/sto_1ckfdpsca74osbe1psp1i3t12r39/story.html

When you place the moving objects outside of the viewframe the user will not see it.

The file is included to see how it works!