Score result is not accurate while retaking quiz

Issue am facing: Score result is not accurate while retaking quiz.

I need to create an assessment based on below scope:

Based on above specifications, I have created a Question bank only with 3 questions and picking one randomly. Each of these questions represent a group and from this first question, I am linking it to its respective Question group (Randomisation between 3 groups achieved).

All three groups lead to one common result screen. Based on the result, the retake assessment or retake course button appears.

While reattempt, using variable I am finding which group was randomly picked in the first attempt. Based on this, I am picking the next group in the order
(so, if first attempt is Group1, then the second attempt will be Group2 and so on). This is achieved by having separate question groups for reattempts.

All these are working fine but when you land up on the result screen on reattempts, the score result isn't correct. Even if you select all correct answers in the second attempt, the result is only 55.55%.

I tried various method but unable to fix it. For randomising the question group on first attempt, i have to keep them in question bank. Any help is much
appreciated. I have attached the source file with this. 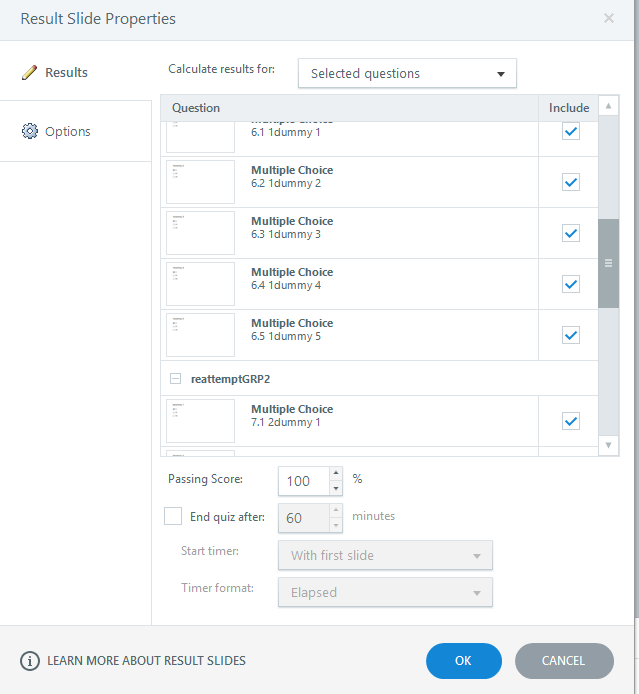 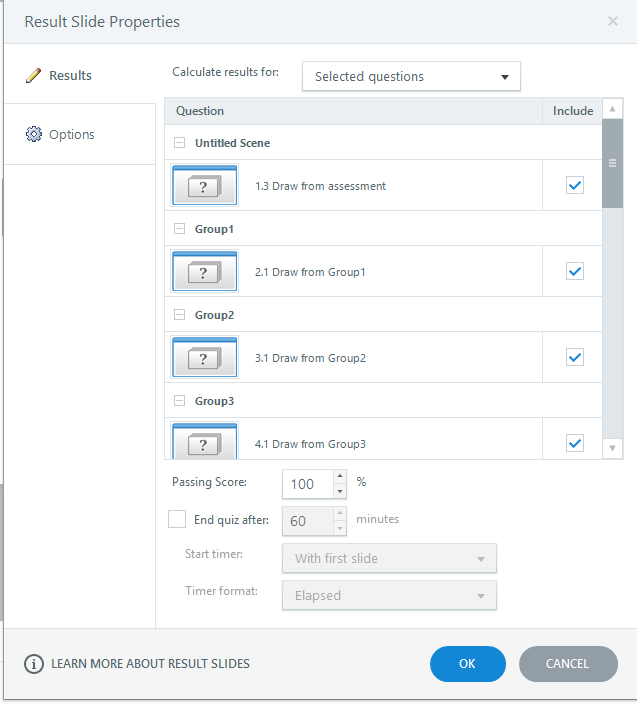 Hi, imgk -- In addition to Wendy's response, I wanted to ask what environment are you seeing this behavior taking place? Are you using an LMS, and if so, are you also finding the same behavior when you test your published output in the SCORM Cloud?

Thanks Vendy, for your response,

The reason why I have included all the question groups for one result screen is because, we dont know which question group will be picked randomly during the first attempt.

Thanks Christie, All the while I am checking this only in my desktop. Since you have asked, I will publish it and check in Scorm cloud. I will let you know what happens there shortly.

@Christie, I checked this in Scorm cloud. I get same skewed result on reattempts (even answering all correctly).

I have only one result screen and have included all the question groups init. Is it correct? or is there any better way to do this?

My challenge is, I have to randomise 3 question groups, User might end up checking all three of them and result screen should capture the score of the last attempt...pls help

you say only 3 question banks in your original post but you are including assessments and dummy questions as well as  - are you sure these aren't the reason for the odd results.

Hi, I removed question bank (hence randomisation is also removed) and made those question groups linear, all works fine. So, it is for sure that there's an issue related to Question bank functionality....