Slide menu does not show all slides, scene is missing

I've kept all my scenes separate in my project thus far to ease editing (when it is near completion, I plan to change the trigger for the "Next" button in the last slide of each scene to continue seamlessly into the following scene). I've kept them separate like this so I have the scenes spread horizontally across Story view, which makes it easier to navigate to slides to edit them, rather than scrolling down a long, long linear list of slides that have been connected by changing the triggers in each final slide of each scene.

However, I tried changing the trigger at the end of the next-to-last scene so that it goes seamlessly into the last scene to see if that fixed everything, but that caused my scenes to spontaneously  mix up their order and even seemed to randomly move slides around throughout the project. What am I doing wrong? I'm afraid to try anything else with the scenes for fear of getting my slides mixed together again. I had to exit without saving changes to play it safe. I appreciate any help!

Welcome to the community!

It may simply be an issue of updating in the menu. If you've pulled in a lot of content, which sounds like that may be the case, or changed the order of the project a few times, this might be contributing to it.

It could help to simply reset the menu, this should pull all of the existing slides into the menu and display them correctly. 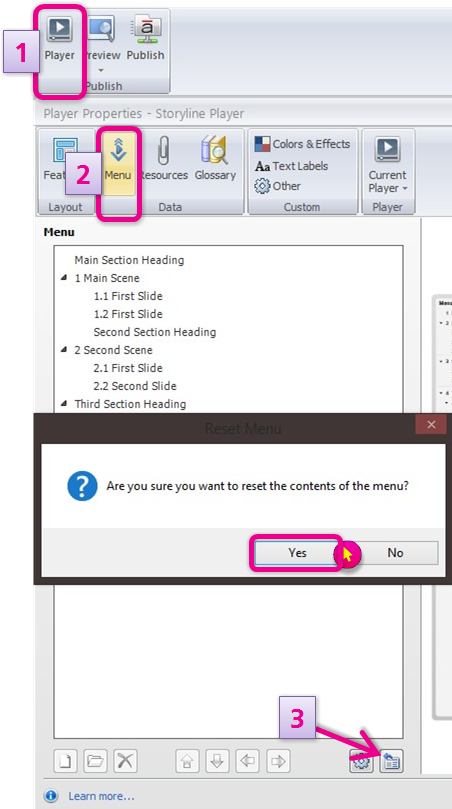 Thanks Christine! That fixed it. I also went to the tutorials to find more about this and got my Articulate IQ up. : ) For anyone else with a similar issue, these helped too:

Excellent! Thanks for sharing that, Breanne :)

Have a great day,

Thank you for the help- took me forever to find this.

Glad that this thread was able to assist you as well Kathryn :)

This was a life-saver!

Hello Melissa and welcome to E-Learning Heroes :) Glad that this older thread was able to assist you and thanks for popping in to share.

Thanks! I was so nervous but with your explanation I can resolve the problem.

So glad you found what you were looking for, Karola! No need to feel nervous--we're always here to help. If you need any more assistance with this, give us a holler!