I'm trying to get a motion path line to start to play at a cue and then stop. Then start again at another cue. There is no "stop" only "move" in the trigger. So I copied and pasted the image and added 2 more motion paths. So when I assign the 2nd and 3rd one, they all default to a single motion path and to the same cue. I'm attaching a copy of the slide. I have a test tube that I want to move, then stop, then waiting until some text appears and then fades, then move again and stop again, and do it again for the 3rd time. Why are all the images defaulting to only 1 motion path and all are changing to the same cue?

You only had a single trigger, probably because you copied/pasted the tube.  I added a trigger for each tube as you'll see in the attached file.  You'll still need to create triggers to change the state of your tubes to hidden when they reach the next cue point to create the appearance of a single tube moving across the slide.  Hope this helps!

When you copy an object, you copy all its triggers, motion paths,and states. So you would need to delete the original motion path and triggers from the copies, then create new ones, like Elizabeth did.

Thank you Hamilton and Elizabeth. It works great now.

Hi Nadja! Looks like Elizabeth and Walt were able to provide some really helpful insight. Delighted to hear you were able to get to working :)

I know this is an old post, but is there any way to stop an animation?

I attached my file. I'd like the character to stop walking at a certain point, but he won't. I even had him disappear and he keeps popping up and walking!!! I have problems at about the 18-22 sec mark of the timeline. I do have a couple variable references on the scene - a timer at the top and a walking pose counter (VARposecounter). In using the 2nd counter on the scene, I'm hoping to have something like, "Stop animation when VARPoseCounter is equal to 22" or something.

Ideally, I'd like the character to stand between the two buildings at the end of the street and stay in the final position - where it looks like he's scratching his head.

Thanks for any help!

I didn't look deeply, but I suspect these two timers are the heart of the animations. 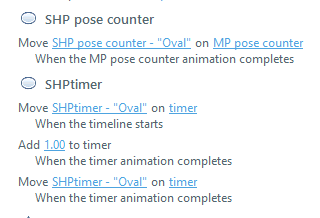 If so, change them to Move Oval on path when animation completes On Condition VARsomevariable < max value.

Ha! I like how Walt "didn't look deeply" but was able to solve my problem! I've been working on it for...too long.

Solution: I stripped out the "Timer" timer; I didn't need it. I was only using it as a way to judge other components' positions in time in the scene.

However, this is what solved my problem: 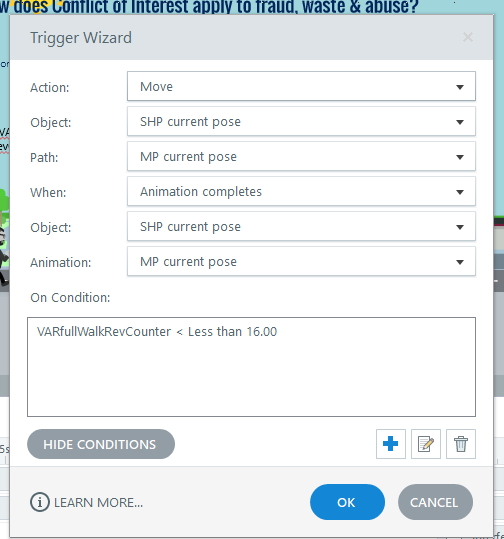 I attached the project. I need to step back and gather my thoughts before I try to explain what's going on here.

I may have spoken too soon. While Walt's sage advice fixed my problem for the most part, I'm still having problems with the final movements of my character.

I can't seem to time the transition between the final walking motion to a state where the character is not moving and is scratching his head. Currently, the character is transitioning to the final stationary state (state 9), but he keeps moving along the motion path. It looks like he's sliding.

While, logically, shortening the motion path would seem to work, I think the problem is the transition between the walking poses (character states 1-8) and the stationary pose (character state 9) when the character reaches the two buildings at the end of the street.

I think I'm trying to hoist too much animation burden on Storyline, but I'm holding out hope the final animations of my character can be tightened by tweaking the variables, their timing, etc. I just can't seem to tweak them correctly!

Thanks for any insight!

PS Built into the scene are three variables with references off the canvas. varPoseState is the pose state-1 to 8-the character is in at any time, VARfullposeCycleCount is the number of full pose state cycles the character makes, and, finally, VARtimer is just a 1 sec timer. I really think the solution lies in tweaking the varPose and VARfullposeCycleCount triggers so the final state-state 9-transitions nicely at the end and results in the character no longer moving.