I am having difficulty transitioning from an Engage interaction I imported into a scene.  This is the last slide in the first scene.  At the end of the Engage interaction, I would like to have the user to be able to press the next button to move to a Powerpoint slide I imported into the second scene.  I have tried several triggers.  Once I publish the course and play the course in my LMS, the next button is not functioning once the Engage Interaction completes.

What trigger would I use?

Here is a screenshot of my issue with the triggers and slide properties: 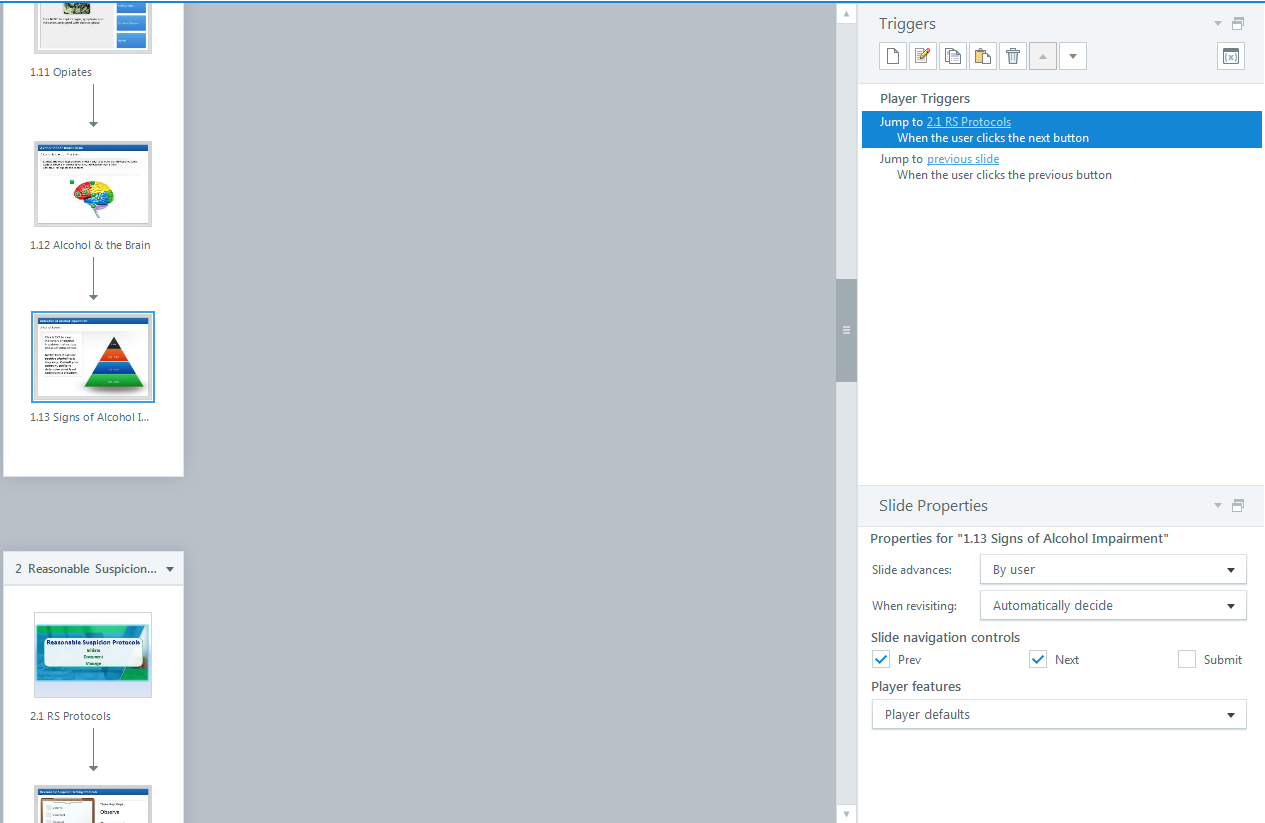 That trigger should work - but what other elements of the Engage interaction did you include when you imported (review this tutorial for the different options)? Is there a next button on the interaction itself? Since Engage interactions are included as web objects, I can't think of anything else that would be impairing the ability of the next button to move on to the next slide. Are you able to share a copy of this course here with us or have you looked at testing it outside your LMS, in a site such as SCORM Cloud for example?

Thanks for your feedback.  However, this does not solve my problem.  I have multiple engage interactions that I have imported and they work within the course as they should.  Although, I have one slide that will not transition from an Engage Interaction to a PowerPoint slide.  All of the other Engage Interactions transition, and they have the same triggers and setting on those as I have set on the one interaction that is in question.

Would I need a different trigger set to move from an Engage Interaction at the end of a scene to a PowerPoint slide in the next scene?  If so, what trigger would I need to use?

Once a Powerpoint is imported into Storyline, it shouldn't make a difference that it was created in Powerpoint in terms of triggers and such. So it's only this one Engage interaction that can't advance to that one slide? Have you tried setting it to advance to a different slide or set the trigger to jump to the scene instead of that specific slide number? Without seeing the file, it's difficult to say - but I'd also suggest confirming that you're working on local project files as described here.  You could also try importing the entire course into a new project to resolve any behavior, and if it's still exhibiting the odd behavior, you can import just those two slides into a new project to share with us.

Yes.  I have tried setting it to advance to a different slide, but when the next button is clicked the course does not advance.  I also tried starting a new project.  Nothing seems to be working...

Please find the attached file.  It contains the slide before and after the interaction that I am having trouble navigating around.

Looks like that is the published output - I'll need the .story file.

I have attached the Storyline2 file as requested.

Thanks for sharing your .story file here with us. I tested your version and a few different triggers and saw the behavior consistently. I tried to recreate this in a new file using a Pyramid interaction such as you had - and that one advanced normally (again using the different trigger options of jump to slide next slide, jump to next slide specific slide, etc.). I'm not able to recreate this behavior on a new file - and I also tried importing your slides into a new project and the issue persisted. It seems to be that Engage slide specifically, as even jumping to a new slide in that same scene did not work for me - so I'd suggest trying to rebuild that Engage interaction and ensure you're following along with all the guidelines here for managing your .story and .intr project files.

Thank you for your response.  I reached out to Articulate directly.  My issue was fixed with one setting.  Once I edited the interaction properties to allow the pyramid to cycle from the top to bottom instead of bottom to top, the next button would trigger the slide to move to the next slide.  Thanks again for trying to help, and I appreciate you and your staff for making sure this issue was addressed.

Thanks Heather for the update and I'm glad that they were able to figure it out.