Hi-
I'm trying to create a flip card interaction in Storyline 360 by using a toggle variable to change states on an object. Works pretty well, except the first time I click to flip the card object, I have to click twice. After that, I only need to click once to change states.

object is named Card - has 2 states: normal and FLIPPED.

1) Change state of card to FLIPPED when cardFlip changes if cardFlip is equal to False.

2) Change state of card to Normal when cardFlip changes if cardFlip is equal to True.

Any idea why it takes 2 clicks to initially change states? I'm sure I'm missing something obvious. story file is attached.

Try swapping the order of your triggers.

HI - Thanks for the response!

I can only change the order of the Slide triggers. 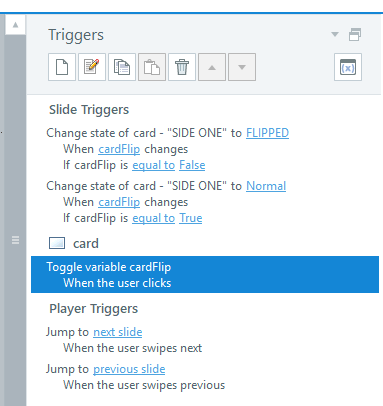 Okay, if you swap the true and false values in your slide triggers it should work.

You could save the hassle of using variables. Create the flip card with a selected state. It toggles on/off when clicked and is less to mess with.

Use the toggle variable not assignment 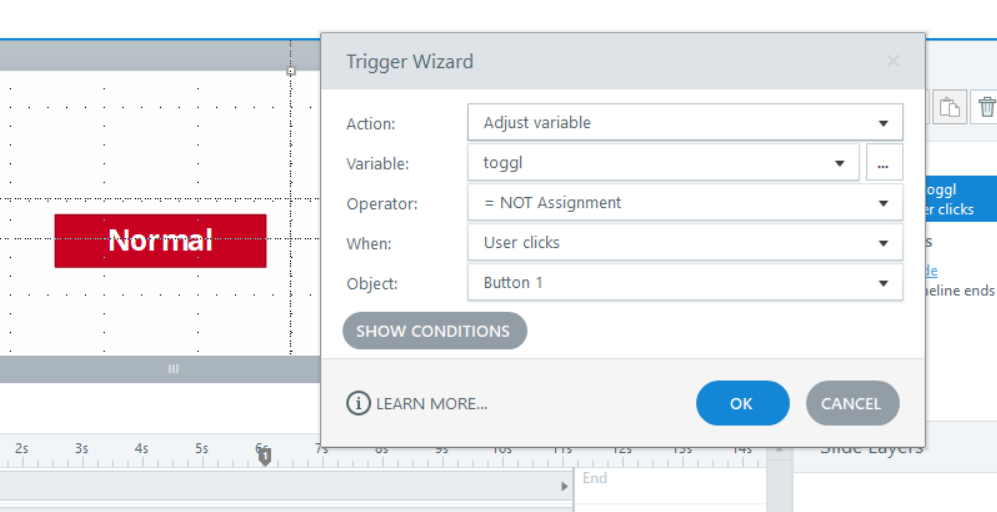 Hi - tried that and it didn't work. Thanks though!

I could, but then don't get the behavior I'm looking for. I'm trying to replicate the flip card interaction in Rise. That interaction lets you flip the "card" back and forth between front and back.

Here is a peek of my setup is that not the behaviour you want?

or are you talking about the swivel animation

Hi Wendy - that's exactly what I'm trying to do.  However in my .story you need to click twice to get the first "switch" to happen.

Did figure out a solution -

added an new object (100% transparent) that's placed directly over my flip card. Add 2 triggers to this object - first changes the state of my flip card to flipped, the second hides the transparent object.

Thanks for all the responses everyone!

I just did the same...LOL

I have the same issue. When I try to reset the variable it requires 2 clicks to do so when the participant has selected more that one wrong answer. it works fine when resetting the right variable.

Thank you for letting us know!

Another option that might help is to convert the slide into a Pick Many question. This will allow you to:

You can find more details on this type of question here: Storyline 360: Pick-Many Questions

If this isn't quite the solution you are looking for, please let us know. We are happy to help!

All good now.  Thank you.

I had this recently and it was resolved by deleting the object and rebuilding it from scratch. Interestingly, the only thing I could see that was untoward was that some triggers had somehow been copied inside to states - these couldn't then be deleted. I did manage to remove these states by cutting the items out from the state back to the layer, removing the triggers, and then pasting them back in the state. However, even from doing that the object wouldn't behave as expected until I rebuilt it.

Just posting this for people who look at the thread.

I know this an older post, I still don't know why one needs to use variables and a toggle. Create the shape with a selected state and it works as desired with no triggers or variables required.