I'm looking at creating a branching interaction (customer, sales type of conversation), where I want the learners to be able to make choices that changes how the customer reacts, or changes the outcome of the scenario. I obviously haven't nailed down the specifics yet.

Are there any best practices you can share, or templates you've used to storyboard something like this?

Cathy Moore has a lot of great tips around scenarios.

My number one best practice is to start out "old school". Before I ever touch a tool I plan out the key learning elements and break those down into individual steps. At the main "decision points" I identify realistic consequences.

When I'm ready to work on the branching structure I use a white board and post it notes. There are all kinds of software options to do this, but I haven't found anything quicker at this early stage where I want to freely move pieces around and rearrange. I haven't built an extensive branched scenario in Storyline yet but I would still start out this way and transfer to the tool once I have a draft laid out. When I already know the design and layout I can then approach the tool strategically and decide what scene and slide structure would be the most streamlined.

This is making me want to build a scenario...

In addition to Natalia's suggestions

If you do branching ensure the user knows where they are at all times and cannot get lost, if your navigation is unintuitive then it is likely wrong.

Totally agree with Natalia on nailing the decision points and realistic consequences in advance.  Any tool you can use to create a flow chart diagram will be incredibly useful to you. It will give you the conceptual strawman to test your course flow and capture all your decision points. Personally, I like to use MS Visio for this but I have colleagues that map it all out in PowerPoint or Word just as effectively.

I did a project similar with what you described, sales, practices, branching. What I did was:

1. I separate the course into training session and practice sessions after the beginning of the course.

3. The branching are set within the practices. Learners will be led to different pathes based on their choices. I wrote the choices and storyboard first then figured the branching. The branching is very long...The thing here is I set some points that if the learners reach, they will be forced to go back to the training.

It works great for our company. Hope it can help you a little bit.

Thanks so much for all your suggestions!

I use the post-it and white board process for initial design too. Sometimes old school is still a good way to go.

I heartily support 'old school' as well.  Pen and paper is great when it comes to rapid design of branching scenarios.

The other good 'rule of thumb' I have found is make sure you contextualise the branches as much as possible, don't branch just for the sake of branching.  Make sure that all branches (right or wrong) are realistic and reflect what someone may encounter on the job.

Good luck with the design

As odd as it sounds, I recommend an essentially linear model in which you put the learner through a series of connected interactions, and then use Storyline's numeric variable types and states to adjust the appearance and behavior of subsequent scenes.

This limits the insanity that can come out of a traditional branched structure (consider that if you have a scenario with three branches, and if each of those options branches splits out into three branches of their own, within two interactions, you suddenly have nine branches to manage).

Using the model below (and I can't take credit for it, I have to tip my hat to Stefanie Lawless from the Yukon Group for this idea, but it works great (you wanna see a really good example of this in action, check out www.brokencoworker.com - I hope posting links to stuff like this is allowed here, but I was told that demo was developed in Storyline).

Let's presume that in the course shown in this illustration, a low score is good (your learners have no idea of the point values assigned to any of this). If, after the Interaction 1, the learner picks Response A, the numeric variable will have a value of 1.

Then, when you go to Establish scene 2, the states of the characters are selected based on the score in the numeric variable. In this case, everyone's happy. You might have a state for each character called "Happy" which features them smiling, etc...

However, if the learner selected Response C, then you might display at least one of your characters in a state called "Cranky" (which might show them scowling).

The point is, use states and variables and simplify the branching structure. I think when you start doing this, you really start tapping into Storyline's power to make your courseware a lot more engaging. 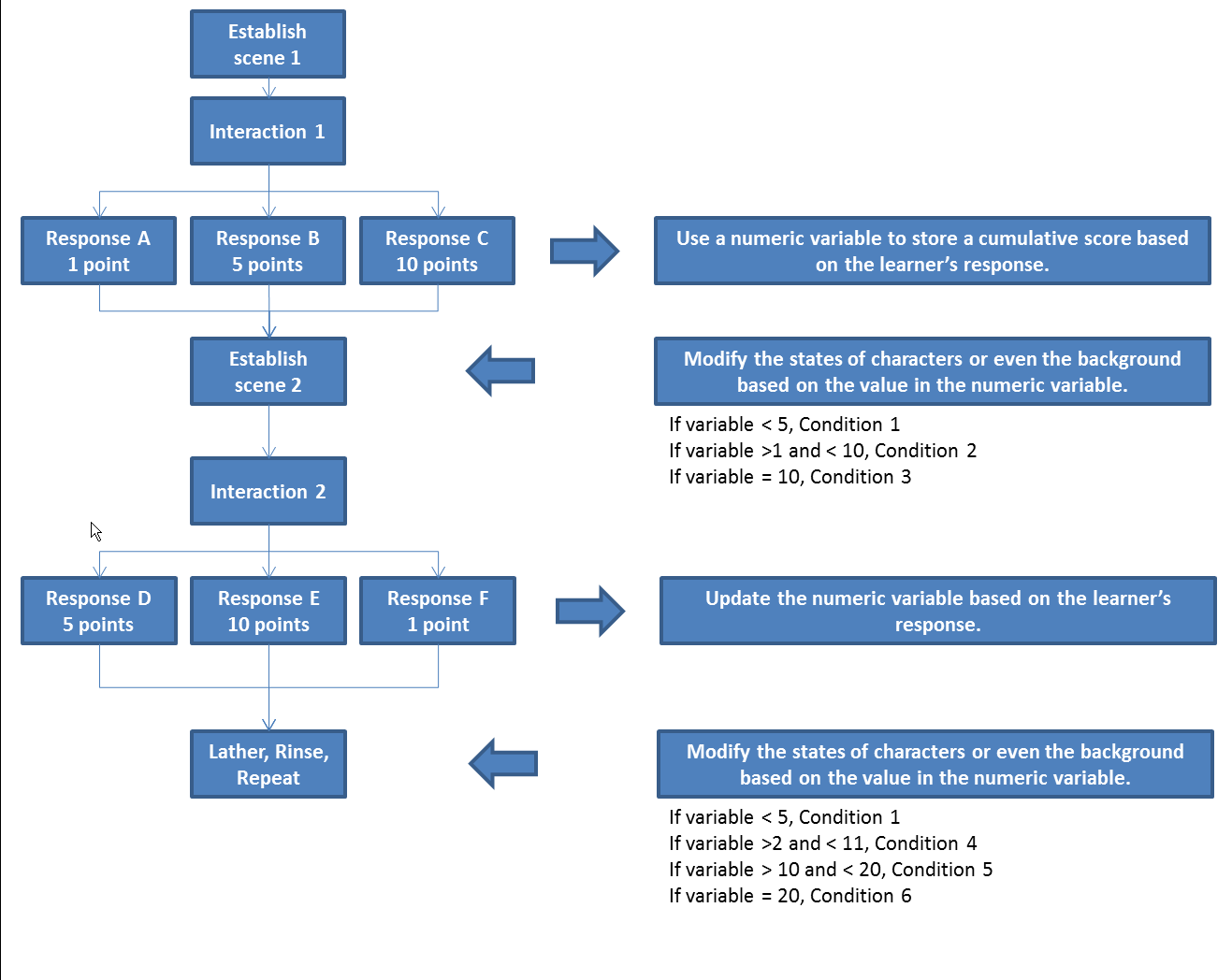 Hi Chris -  We definitely love links to examples, whether or not it was designed in Storyline. Broken Coworker is a fantastic example. I love the use of realistic choices and consequences. The first time I saw it I was so intrigued by the options that I went through it several times just so I could explore the different paths and see the different outcomes.

I agree that once you're ready to execute, Storyline triggers and layers really help to keep the layout lean. I am loving this model and the way you have the point values set up. Many thanks for posting!

What's the point of having a powerful tool, if you don't take advantage of the power it offers???? Chris is heading down the road we should all be taking. Like every true educator, he shows us the path to a better way.

It seems a shame that so many folks are intimidated by variables and states. Yes, there is a learning curve, but the payback can be substantial, once get get the hang of it.

Building a lot of extra slides and figuring out how to branch them is like backspacing to make corrections in a work processor. A lot of extra effort goes into a process the program is designed to do for you. (How much time do YOU spend,  backing up and re-typing stuff?)

Hey, it's a learning process, right. We all know how important learning is and the dividends it pays.

I just ran the "Broken Worker" scenario. That's a fine production. I actually ran it, twice, to see what some of the alternatives were. Good job!

I love the example of the states and variables. That's exactly the kind of visual I needed to solidify things in my head, and I think it will work for my project.

My secondary question is this. I'm having trouble figuring out how to make the various choices vague enough to not "give away" the answers. A similar scenario to one I'm considering:

Interaction 1: Customer wants to know if she can travel on a plane and take her pet.

Response A - Sure, no problem (0 pts -- customer's pet is actually something that would not be able to travel on a plane)

Response B - Let me get some more information from you. What kind of pet is it? (10 pts)

Obviously this is not the actual scenario I would be using, but does it make sense in terms of where I'm struggling? How do I get the learner to realize they should be checking to see if the "pet" is allowed or restricted in some way, without spelling that out in the response and making it obvious?

My initial thoughts are I could do something with text entry, but I'm trying to figure out how that would work...

I'm creating a branching path in Storyline. I have an option where the learner can choose to Create a User, Edit a User or Delete a User. I have hotspots over each button to steer folks towards that option once they have clicked.

Here's the dilemma: how do I achieve a "viewed" or "complete" status on one or all of those branches in order to halt progress without all three being viewed, but remaining flexible enough so the user can review them in their preferred order?

I could force things to be linear: Create > Edit > Delete, but it seems more engaging when the user can choose their own adventure so to speak.

Make your navigation buttons into a button set.

Create a True/False variable for each branch, example: Branch1Viewed, Branch2Veiwed, etc... Make it False by default.

On the last slide of each branch, create a trigger that adjusts the variable to True when the user clicks the Next button. Have the Next button jump to the navigation slide.

On the navigation slide, create a slide level trigger at start of timeline that changes the state of the navigation buttons to visited, if Branch@Viewed is equal to true.

This setup will show the user that the branch has been completed, yet still allow them to navigate any branch in any order they want.

I loved the Broken Coworker

Speaking of branching, I always found it important to provide wastly different outcomes. Learners can easily sense that despite their "choices", they are being lead down the same path.

I'm wondering if there are any best practices for receiving branch scenario content from clients. Traditionally I have received content from clients in PowerPoint, but is that the best way to set it up? At a glance I am thinking I would want a slide deck in PowerPoint and a visual storyboard to clarify the links between slides/branches, but am not 100% confident in this method.