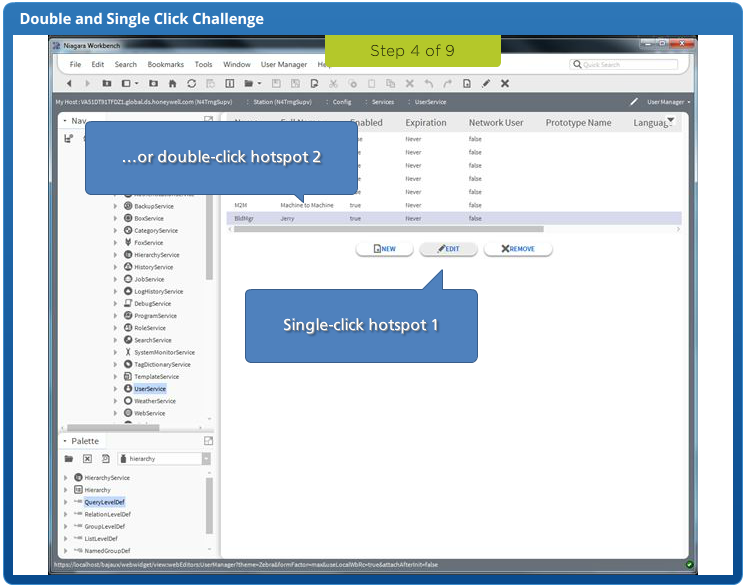 I had a request from a client to modify a hotspot quiz question from a simulation that would allow the learner to answer the question correctly if 1. They single-clicked the EDIT button or 2. Double-clicked item in the list. If they click (single) anywhere outside of the two hotspots they would get the question incorrect. This can’t be done with the hotspot question the screen recording produces so

1) Create a blank slide and exported the screen image at that point in the recording.

2) Created two radio buttons. By default they are part of a button set so if one is in the selected state the other isn’t.

4) In the slide view, click on the “Incorrect” radio button so that it is selected. This eliminates the need to have a trigger set the “incorrect” button to a selected state when the slide begins.

5) Insert two hotspots over each of the areas the learner can click on.

8) Finally turn off the change mouse on hover for each of the three hotspots.

Of course there a few optional items I didn’t include in these instructions but this will work without those and I am including the sample so you can deconstruct it further as you desire. And feel free to contact me with questions. I like this particular method because it doesn’t require the use of variables which are always a time killer.

You are welcome to EDIT the title of your post to read "FREEBIE" or perhaps "DEMO" so that it will quickly denote that your post is a contribution rather than a question.

Also, in case you weren't aware, you would also be welcome to share your post over here in our design-related Building Better Courses forum too.