In my storyline 360 project output in the  engage 360 interaction the continue button does not appear after clicking all of the segments in the engage interaction.

i have tried many different settings none seem to work

1. Create a pyramid in engage 360 and set the interaction properties to "user can advance any order" .  For this test I have disabled the next and previous buttons to advance through the engage.

3. add a new slide and import the engage 360 pyramid form 1 above

4. turn off the 'next' and 'previous' buttons for the engage slide ie in storyline 360

5. publish the storyline 360 project containing the engage 360 interaction   for  "web"

6. upload the attached zip  to a hosted lms

7. run the presentation and the "continue to next slide" button does not appear after completing the engage 360 interaction

I have uploaded my test case as a zip

please confirm if this file works for you and if there is a major bug and when it might be fixed ?

I took a look at the file that you shared here. You didn't have the Next button enabled on the slide.

I updated the slide properties to display the Prev/Next button on the slide and it works as expected. 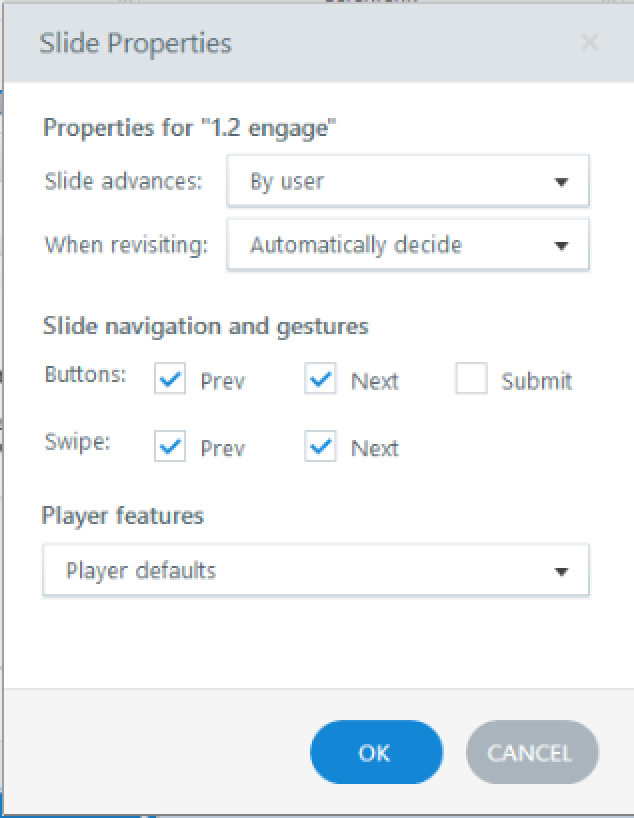 Thank you for your response Leslie

I tried publishing and uploading the file you provided and whilst the next button is now visible the "contunue" button does not appear after completing all steps of the engage interaction.

in any case dosent adding the next and previous button to the slide defeat the purpose of having a complete button once the actions on the engage interaction are complete?  ie the end user can just hit next before completing the engage ?

and for 'button label' i can not edit the text in the box  for the name of the button either?

Did you take a look at the published file that I shared above? The 'next' button takes you through the interaction and then proceeds to the next slide. I'm not sure what continue button you are referring to?

I cannot seem to edit that text or see the options there for the 'Next Slide Button' either and I will follow up on the team about that:

For the interaction to work as expected in HTML5 output, you would need to upgrade it to 360 as you can see in this documentation.

Thanks Leslie for looking into that  and i knew that i could override it with the navigatino buttons but the idea of the "when complete" show the continue button and in the image above its called the  "next storlyline slide" is pretty important if you want to force people to do the learning activity.

Hi Adam! Our team is still looking into this as it seems that the setting was present on the ribbon to work with the potential for Engage '09 items to be utilized. I do not have an update to provide at this time regarding that setting/option. The setup that I shared above allows the user to go through the interaction prior to moving onto the next slide so hopefully that will assist. It sounds like the expectation is that the section displayed above is not applicable to Engage '13 or Engage 360 though.

Hello! I'm curious if there are any updates to this issue?  I'm using Articulate 360 and created an interaction (zoom) in Engage 360 Imported to Storyline 360 and same issue is happening...next button does not appear in the engage interaction and the next button on SL player is present but not active. Also, Engage>tool options in SL are grayed out in the browser and next slide button areas.  Thanks!

Did you install Update 3 for Articulate 360? There was an issue fixed there where the Next button on an Embedded engage interaction was disabled in the Flash output (although it worked in HTML5). If you're still having difficulty using the latest update we'll want to take a look at your .story file.

Has there been a fix to this yet?  I am running Storyline 360 and I am on version 3.4.  We are also running Engage within 360.  We created an Engage interatction and imported it into 360.  When we publish the Next button does not work in the Storyline player for this slide.  The slide trigger is set to go to the next slide when Next is clicked.  However when i click next nothing happens.  Any suggestions?

The upgrade took care of the issue I was having. Thanks!

Thanks for popping in with an update Susan - glad it's working for you now.

Hello Diona - Thanks for the details and letting us know that you are utilizing the latest update. Would you be able to share your .story file for us to take a look?

I am having the same issue. I have tried every setting and I am on the latest version of Storyline 360. I love engage but shy away from it because of constant problems with navigation.

I'm seeing the same thing you're seeing, Steve. I'm going to get this over to our Support Team to have a closer look. Keep an eye out for an email from Support@Articulate.com!

Hi, was this ever fixed? "When we publish the Next button does not work in the Storyline player for this slide. The slide trigger is set to go to the next slide when Next is clicked. However when i click next nothing happens."

I'm having the same problem, can't click Next or Previous when published

Sorry you're running into this as well. I checked in on Steve's case, but I don't see that we came to a resolution.

Can you tell me more about your project?

Thanks for the reply!

I know it works in SL1 with an 09 Engage interaction.

Thank you for reaching out to our team Jocelyn.

Looks like Richard is already taking a look and you should be hearing from someone soon.

Hello. I am having an issue with this as well. Have already raised a case and am using SL3 and Engage 13

I see that you've been working with my colleague Jose on this and he confirmed it as a bug that our team is looking into. We'll let you know here and in your case as soon as we can about this issue.

It sounds like you're hoping to hide a button or restrict the navigation in your Engage interaction? Engage doesn't have the same set up with States and triggers to allow you to hide it as you can in Storyline.

If you can share a bit more about what Engage interaction you're using or even a copy of the .intr file, we can take a look and offer some other ideas.

Dear all, since more than a year I try to unsubscribe the mails from E-learning Heroes. Since than I work for Randstad and I don’t develop anymore. Is there someone who can help me to prevent from the daily mails? Regards, Margreet.

To stop receiving email notifications, you'll want to unsubscribe from each thread or article you're subscribed to. The easiest way to do this is go to your profile, click on the Subscriptions tab, and delete all the threads you no longer want to follow. Check out this video to see how.

Is this issue still being investigated? I have a project that will not move past an Engage interaction but it used to.