Audio file cutting off once published

I created a 2 slide powerpoint, imported .WAV audio onto both slides like I've done several times in the past without issue.  The first slide is short, (about 15 seconds of intro music)  and the second slide is significantly longer (about 40 minutes). I imported the audio -- the full audio files for both slides show up in the audio editor and I can listen to them in their entirety. Then when I publish (for the web) and access the player file, the first slide plays fine, but the second slide only plays the first 7 minutes (the file is 40 min long). This has never happened before, and I have done several presentations in the same exact format.

The other wierd thing is, for the second slide specifically, the runtime meter at the bottom shows a runtime of 7:00, but at the top left ot the screen, it gives me the a runtime of 40+ minutes (which is correct - combined its a little over 40 minutes. Very conflicting.

So to sum up - the audio editor shows that everything is in place, but once I publish it (using the web setting) it cuts off the audio 7 minutes into the 2nd slide.

I am recording with an external recording unit and then importing the .WAV files. Havent changed any of the settings on the unit, they are exaclty the same as they've always been. I'm using Presenter '09. I've done at least 20 presentations like this without issue.

Any idea why it is cutting my audio?

Heres a screenshot, with the conflicting runtimes highlighted. 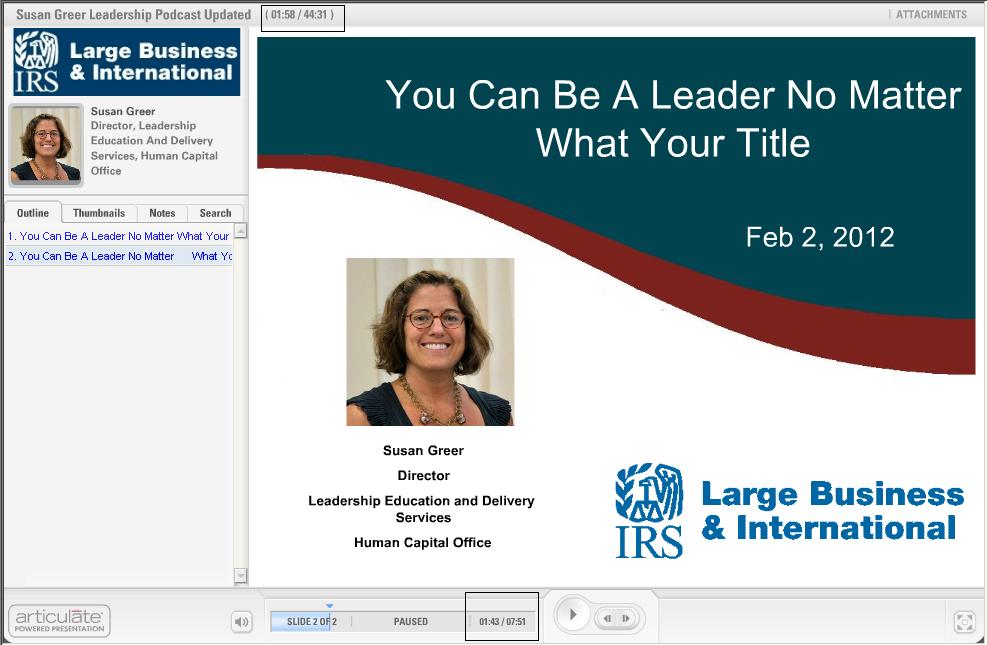 Did you try deleting that second slide, and creating a new one? Ive seen a slide "hold on" to or screw up the audio on a slide, and not work correctly again, even though you delete/replace the audio in it. Especially since you have used files of that length in the past.

It really sounds like something is wrong with that slide, or that whole file. I would also shut down ppt and open a whole new test file, import your audio, and see if it still gives you the same error.

I've tried importing the audio into a whole new presentation...and had the same issue! I have no idea what is going on here.

Sorry for the frustration. I'd recommend sending us your files so we can take a closer look. If you'd like to do that, please create an Articulate Presenter package, then upload the zip file to our server. You can review how to do this here:

Please be sure to include a description of your issue, your version of PowerPoint, version of Windows and version of Presenter '09, which you can find in Help and Support -> About Articulate Presenter. Please also include the URL for this thread so I can follow up with you personally in the forums. And feel free to come back and leave your case number here so I can keep a close eye on it. Thanks!

I'm having the same problem with my audio file cutting off for select slides (not all 60 slides) when I preview or publish in presenter. I've read several of the suggestions, reviews, comments etc and applied them but to no avail and again rather frustrating. I really don't want to have to submit my files for you guys to review because this unfortunately for me happened at the last hr i.e. deadline is tomorrow. As there been a solution to this bug or is my only option to send you my files (i'm really having so much doubt and regret for purchasing this software).

Another issue i'm having is related to the quiz inserted in my presentation. If users fail, they have 3 times to try and retake the quiz. I have successfully setup the limitation, however, if a user passes, I don't want them to have to see the re-take quiz button. Yet, after reading the suggestion from staff to change the limitations to "once" - this unfortunately does not work for my requirement.

I'm really sorry to hear about the difficulty you're experiencing. If you have time, we'd be more than happy to have your files sent to us so we can help out. Our support team works fast, and they'll be happy to help out.

First, create an Articulate Presenter Package of your presentation as described here. Then upload the resulting zip file from your computer on the second page of this form, and we''ll attempt to diagnose what's happening when we receive your upload.